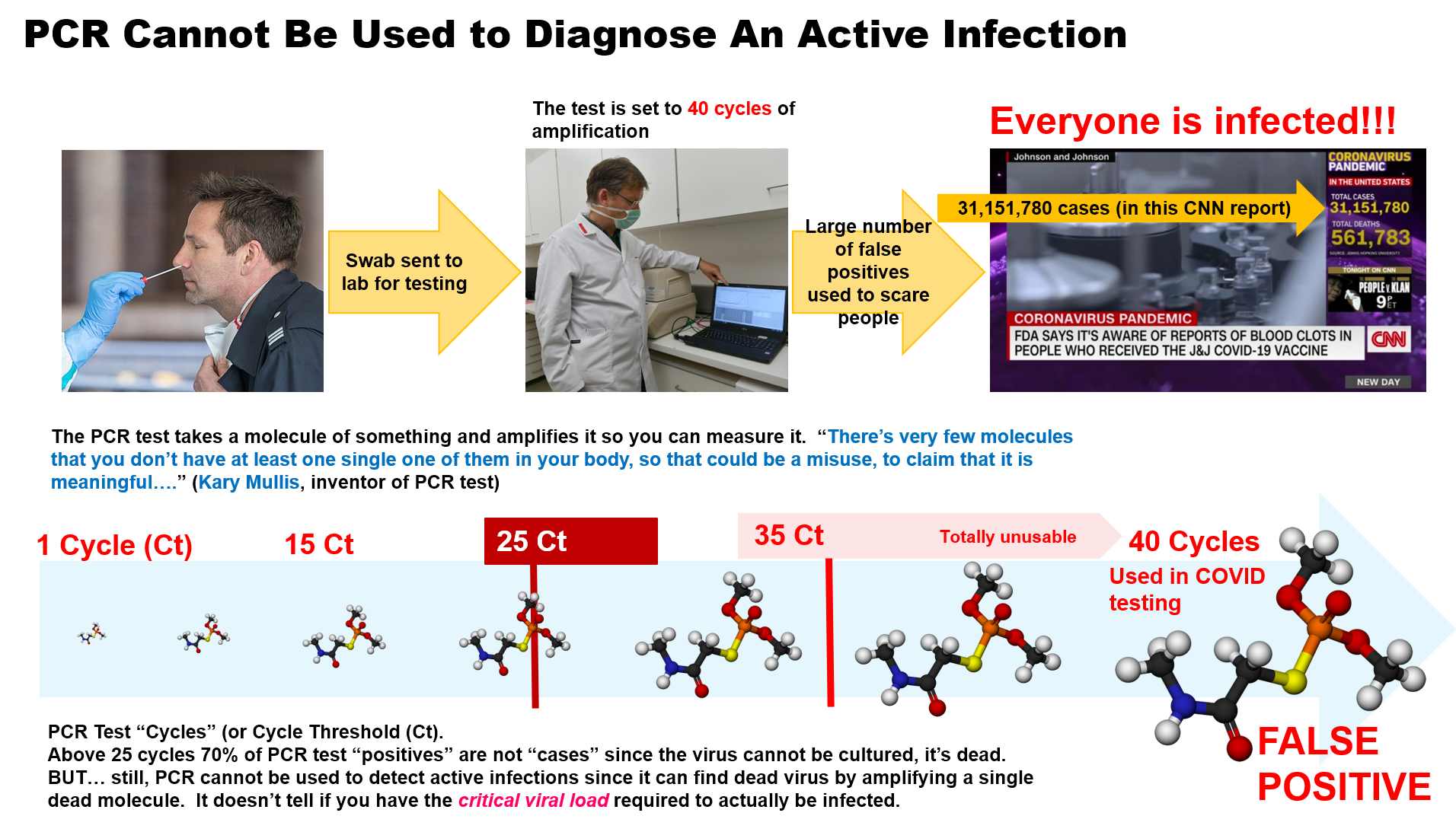 Even Dr. Fauci admits that high cycle counts amplify a small amount of material that is un-culturable (think how you culture bacteria on a petri dish).

Yes, there appears to be a real virus, it just isn’t as common as people think it is.

Kary Mullis (inventor of the PCR test) explains how it can “make something out of nothing”.

Amplifying a tiny amount of virus gives a false positive because it’s still a tiny amount that you started off with.  PCR can make it seem like there’s a lot because it amplifies.  If you turn the cycle count high enough, you can find anything you want.

The charts below were extracted from a scientific paper demonstrating the effects of higher cycle counts on detection.  The cycle count is found on the X-axis of the chart.  Notice how the range of 30-40 cycles creates an exponential increase in positive results.

Dr. Fuellmich has uncovered several plots in Germany, and worldwide, to engineer the scientific establishment into several pro-vaccination narratives.  He is currently engaged in litigation over this, as are many others in various countries.

“It is completely unscientific.  It looks as though it was done in a sloppy way on purpose for the sole purpose of producing as many false positives as possible, all over the world, so that their agenda, which ends with the so-called vaccinations, which of course, we all know now, it doesn’t have anything to do with vaccinations. What we’re dealing with is genetic experiments.”

“The lockdowns are based on the same Drosten test – all of them! All of them! Because his test was recommended by the WHO, as the gold standard for the entire world, all the other PCR tests – there are about 300-500 in the meantime – they all use his test as a blueprint. Of course, all of them know that these tests cannot tell you anything about infections, but they’re all making a lot of money, so they don’t care. I’ve spoken with a couple of these PCR test makers. Of course they’re not going to admit it in public but at least behind closed doors, they admitted as much.”

“He (Drosten) claimed that there are asymptomatic infections, meaning people who show no symptoms whatsoever, which is normally: you’re healthy, they can be infectious. That was important for him to make everyone in the entire world afraid of everyone, no matter how healthy they looked.”

Then there’s the flawed polymerase chain reaction, or PCR, tests which are also experimental under an EUA and have artificially increased the number of overall cases. The lawsuit notes the manufacturers of the PCR tests include a disclaimer that the “FDA has not determined that the test is safe or effective for the detection of SARS-Co-V-2.”

“Manufacturer inserts furnished with PCR test products include disclaimers stating that the PCR tests should NOT be used to diagnose COVID-19. This is consistent with the warning issued by the Nobel Prize winning inventor of the PCR test that such tests are not appropriate for diagnosing disease,” the lawsuit states. Indeed, inventor Kary Mullis has warned about Anthony Fauci and his history of lying and fraudulent use of his PCR tests.

The lawsuit lists various quotes from Fauci showing he knows the PCR tests are fraudulently being used, and yet they are still used to this day. As it states: “The way in which the PCR tests are administered guaranties an unacceptably high number of false positive results.”