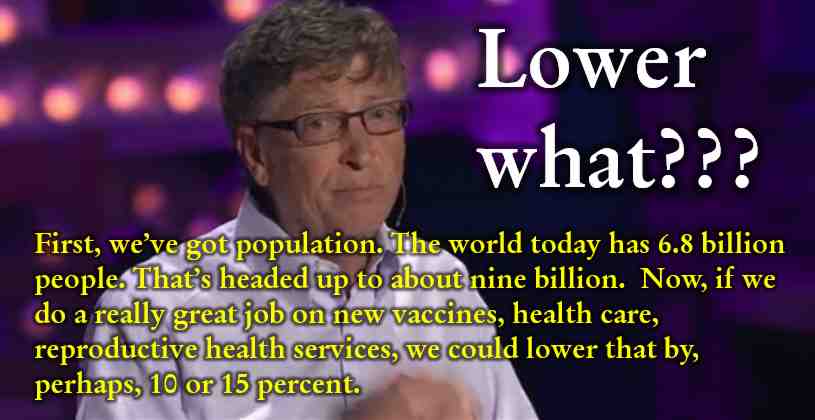 The hypothesis that the most powerful people in the world are manipulating governments and corporations to reduce the worldwide population so that the “useless eaters” don’t consume all their natural resources while simultaneously preserving the planet’s environment.  It is also thought this effort uses altruistic movements such as environmentalism to impose a world government, which requires a substantially reduced population in concert with a control grid of technological control and government corruption.

Although there isn’t yet a Nuremberg Trial of sorts to convict anyone of this agenda, it appears that The Great Reset (World Economic Forum) is recent manifestation of this agenda.

Bill Gates and his pro-vaccine foundations have a long history of interest in population control.

One such reference occurred in a 2010 TED talk where he discusses carbon dioxide (CO2) reduction as a function of several variables, the first of which is population.  The astute listener would notice that he just mentioned “new vaccines, health care, and reproductive health services” as a method to REDUCE population.

03:45 This equation has four factors, a little bit of multiplication. So you’ve got a thing on the left, CO2, that you want to get to zero, and that’s going to be based on the number of people, the services each person is using on average, the energy, on average, for each service, and the CO2 being put out per unit of energy. So let’s look at each one of these, and see how we can get this down to zero. Probably, one of these numbers is going to have to get pretty near to zero.

04:16 (Laughter)
04:17 That’s back from high school algebra. But let’s take a look.
04:21 First, we’ve got population. The world today has 6.8 billion people. That’s headed up to about nine billion.  Now, if we do a really great job on new vaccines, health care, reproductive health services, we could lower that by, perhaps, 10 or 15 percent.  But there, we see an increase of about 1.3.

In 2009, the TruTV reality show, “Conspiracy Theory with Jesse Ventura,” featured leading medical doctor Dr. Rima Laibow, who treated multiple heads of state, discussing how she learned of a UN plan to release a virus as the trigger for depopulation through vaccines.  Regardless of what criticisms there are of this doctor, this interview did occur in 2009 and does accurately characterize the COVID-19 narrative.

Often called “America’s Stonehenge”, it was erected mysteriously and anonymously in Eastern Georgia.

It has several de-population themes inscribed on it: