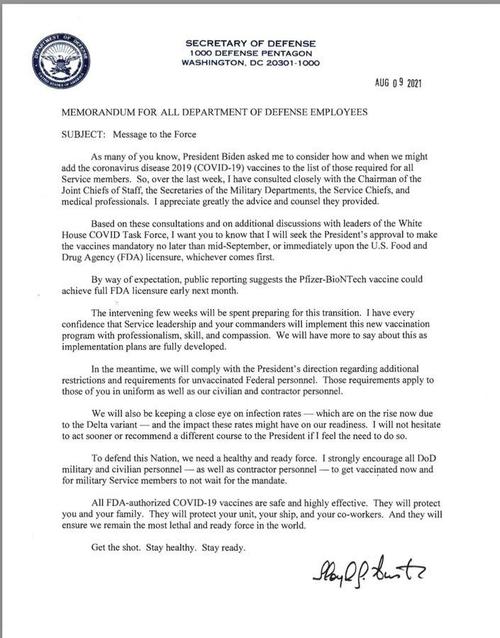 “Military officials have said that once the vaccine is mandated, a refusal could constitute failure to obey an order, and may be punishable under the Uniform Code of Military Justice.”

The US military is ready to begin enforcing a coronavirus vaccine mandate across all branches, the Associated Press is reporting Monday based on a Pentagon memo it’s obtained. The memo is expected to go out on Monday and is intended to “warn” troops to “prepare” for the new requirement.

It will require service members to get the jab by a Sept. 15 deadline, a date which could actually be pushed up if the FDA gives final approval for the Pfizer vaccine or if infection rates rise rapidly. Here’s what’s in the memo, according to AP:

“I will seek the president’s approval to make the vaccines mandatory no later than mid-September, or immediately upon” licensure by the Food and Drug Administration “whichever comes first,” Defense Secretary Lloyd Austin says in the memo to troops, warning them to prepare for the requirement. “I will not hesitate to act sooner or recommend a different course to the President if l feel the need to do so.

Biden is expected to give the greenlight, given other recent federal mandates for civilian workers. The memo also serves to give military commands a heads up in terms of putting in place proper logistics and assessing what’s needed to implement the new plan on large scale.

Prior reports have strongly suggested there’s a large segment of the US armed forces which remain ‘vaccine skeptical’ and hesitant, for example this report from just last week:

A New York state military law attorney said he is receiving calls from Airmen serving at Wright-Patterson Air Force Base — and from active-duty service members across the country — asking about options should the Department of Defense mandate that military members take the COVID vaccine.

…Some service members “are scared and skeptical, basically, to take the vaccine when it’s an experimental vaccine,” he said. “That’s really what we’re seeing.”

He said his firm is getting “multiple calls” from service members interested in litigation or class-action lawsuits.

While currently service members are given as many as a dozen or up to 17 different vaccines – most often upon entry into boot camp (and based on deployment status and what their military job is) – it remains that the COVID vaccine is still a non-FDA approved “emergency-use basis” shot.

Visit our store now before the sale ends!

Further it remains that throughout the entirety of the pandemic deaths among US military personnel have remained very low compared to the broader population. This is likely due to military personnel tending to be a healthier, fitter, and younger demographic. Some have argued this fact alone should make a vaccine mandate unnecessary.

“Military officials have said that once the vaccine is mandated, a refusal could constitute failure to obey an order, and may be punishable under the Uniform Code of Military Justice.” https://t.co/RPjjGSPG3q

Legal pushback against a Pentagon-ordered services wide mandate could hinge on whether FDA approval finally comes ahead of the Sept. 15 requirement. If FDA full approval isn’t there by then, it will no doubt trigger legal controversy akin to the anthrax vaccine mandate for select personnel (usually infantry and forward operating forces) in the 1990’s.

“Up until the point the vaccine is … FDA-approved, military members can’t be mandated to take the vaccine, unless the president of the United States would waive that requirement,” he [attorney and military law specialist Greg Rinckey] said. “It’s very similar to what we kind of saw with the anthrax vaccine back in the ‘90s.”

In 2003, a federal judge sided with service members who sued, maintaining that the military could not administer a vaccine that has not been fully licensed without their consent. That program was stopped, the Associated Press reported recently.

This comes on the heels of federal workers, with the exception of the Post Office, being ordered to get the vaccine.

Very likely we’ll see instances of refusals to get the jab among military ranks, perhaps leading to mass resignations or punitive measures taken against them. While the Pentagon will mandate the jab, it’s as yet unclear what the “or else” in terms of dealing with those who resist the mandate will be. Officials have hinted it could be punishable under the Uniform Code of Military Justice (UCMJ) as a refusal to obey lawful orders.