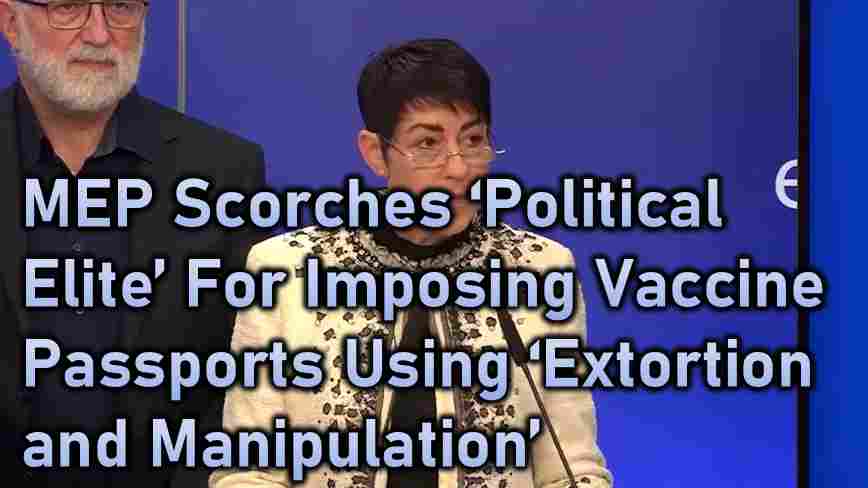 Several members of the European Parliament excoriated the political elite for imposing mandatory vaccine passports on the people.

Christine Anderson, a member of Germany’s conservative populist AfD party, delivered a powerful speech on Friday shredding the inherently oppressive vaccine passport and the political establishment rolling them out in the Western world.

“It’s not the goal that renders the system oppressive; it is always the methods by which the goal is pursued,” Anderson said from the EU Parliament floor. “Whenever a government claims to have the people’s interest at heart, you need to think again.”

“In the entire history of mankind there has never been a political elite sincerely concerned about the wellbeing of regular people. What makes any of us think that it is different now. – Christine Anderson European Parliament.” pic.twitter.com/oSVYzg81p5

“In the entire history of mankind there has never been a political elite sincerely concerned about the wellbeing of regular people. What makes any of us think that it is different now?”

“Whenever a political elite pushes an agenda this hard, and resort to extortion and manipulation to get their way, you can almost always be sure your benefit is definitely not what they had at heart.”

Anderson also explained the corruption behind the mandatory COVID injection when long-term data about its risks and side effects has still not been collected.

“As far as I’m concerned, I will not be vaccinated with anything that has not been properly vetted and tested, and has shown no sound scientific evidence that the benefits outweigh the disease itself and possible long-term side effects, which to this day we don’t know anything about,” she said.

“I will not be reduced to a mere guinea pig by getting vaccinated with an experimental drug. And I will most assuredly not get vaccinated because my government tells me to, and promises in return I will be granted freedom.”

“Let’s be clear about one thing: no one ‘grants’ me freedom, for I am a free person,” she added.

This comes as European governments continue imposing their Great Reset plan to make everybody submit to the COVID vaccine passport, which has resulted in ongoing massive protests erupting across Europe.

Notably, many European nations have suspended the use of the AstraZeneca vaccine earlier this year following reports of severe blood clots.

Several European nations like Sweden and Denmark have also recently suspended the Moderna vaccine for people under 30, citing reports of heart inflammation.