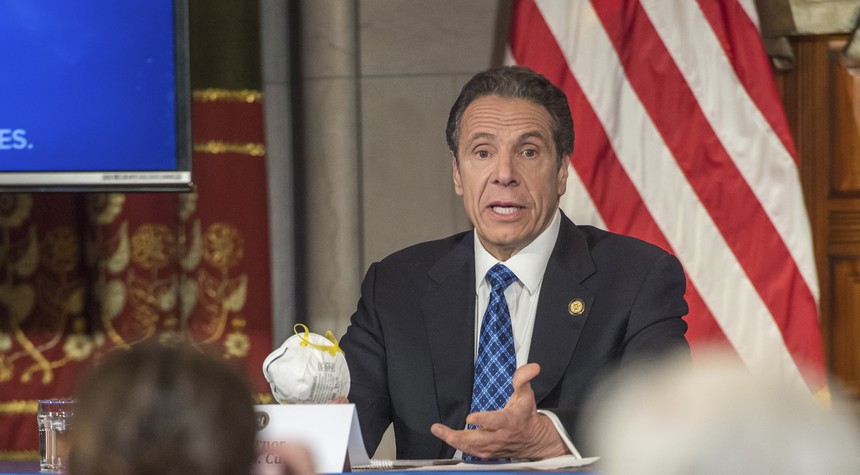 Remember when some in media were touting Gov. Andrew Cuomo as a possible presidential contender, perhaps even a replacement if needed for the failing confused presumptive Democratic nominee Joe Biden?

Since then so much information has come out about what a horrible job New York did in dealing with the virus and especially with nursing homes, that it’s hard to believe that any could still be holding onto that idea.

This new report might just finish off anyone still holding any hopes about Cuomo.

Cuomo has come under fire this month because of an order on March 25 requiring nursing homes to accept people who had tested positive for the virus, despite nursing homes being one of the chief populations at risk across the country. That order is believed to have contributed to a number of nursing home deaths. Cuomo didn’t rescind that order until May 11.

Over 5,433 people have reportedly died at nursing homes and adult care facilities as of this week. That’s the most in the nation.

But that number isn’t quite right.

Because up until April 28, according to the New York State Health Department (NYSHD), they counted people who lived in nursing homes as dying in the nursing home as a nursing home death, even if in the last stages that person went to the hospital and died there.

But in early May, the reports the NYSDOH was putting out began omitting nursing home residents who died in the hospital thus obscuring a number of nursing home deaths. So there are actually even more than 5,433.

But the department made a subtle change to its disclosures beginning around May 3, according to web archives. The NYSDOH told the DCNF its disclosure now only reports coronavirus deaths for long-term care patients that died while physically present at their facility.

New York’s coronavirus tracker “currently does not include out of facility deaths,” NYSDOH spokeswoman Jill Montag told the DCNF. “Deaths of nursing home and adult care facility residents that occurred at hospitals is accounted for in the overall fatality data on our COVID-19 tracker.”

Thus, obscuring the very important fact that they got it in the nursing home and throwing off the stats. The difference left off at least 479 deaths, according to the Daily Caller.

New York is the only one of the top nine states for nursing home coronavirus deaths to have this new creative count.

Spokespeople for the health departments of New Jersey, Pennsylvania, Illinois, Maryland and Massachusetts confirmed to the DCNF that their disclosures include coronavirus deaths of long-term care residents regardless of their place of death.

The health departments of California, Connecticut and Georgia all make clear in their reporting that their disclosures of long-term care residents who died of coronavirus includes those who died in hospitals. Connecticut’s reporting of nursing home deaths, for example, specifically “includes residents currently in-house, in the hospital, or who are deceased.”

According to the Daily Caller, the decision to change their reporting procedure, interestingly, came on the same day that it came out that there were 1700 other deaths in nursing homes previously undisclosed. This was also as Cuomo was coming under a lot of fire for the deaths. In other words, it sure looks like they were playing games with the numbers to reduce the scandal and deflect fire away from New York and Cuomo.

The president of the National Association of Medical Examiners, Sally Aiken, told the DCNF that “from a public health point of view, tracking the possible location of exposure to COVID-19 is important.”

“It is important to track possible exposures, and not doing so accurately interferes with appropriate public health response,” Aiken said.

Betsy McCaughey, a former Republican lieutenant governor of New York and current chairman of the patient advocacy group Committee to Reduce Infection Deaths, told the DNCF that New York should rejoin other states and resume disclosing the deaths of all long-term care patients, regardless of whether they died at a hospital.

“It would be a more accurate reflection of the peril at nursing homes,” McCaughey said. “If you look at the more accurate figures reported by other states, it’s reasonable to conclude that half of all deaths in the United States are among nursing home residents and that rather than shutting down the economy they could have focused resources on nursing homes.”

Of the other top nursing home death states, the percentage of those deaths to the states’ total deaths ranges between 36-66%. New York on the other hand is at 20%. Is that because they are undercounting the deaths? One has to think that at least plays a part. And how do you just miss the other 1700 deaths to begin with? Can we expect we’ll find even more coming?

New York and Andrew Cuomo, this is just shameful.