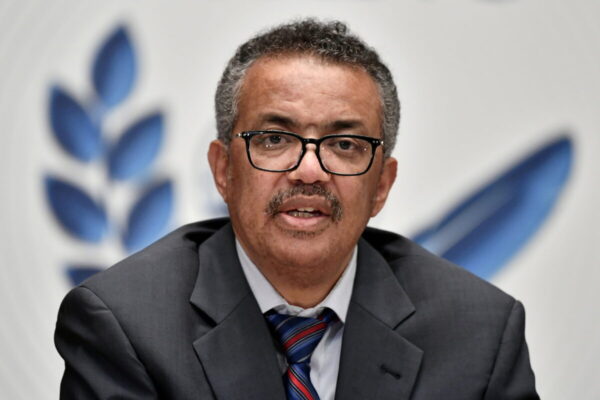 Share to the world...
Source Link: https://www.theepochtimes.com/who-admits-everyone-who-gets-monkeypox-vaccine-part-of-clinical-trial-to-collect-data_4618460.html?utm_source=partner&utm_campaign=TheLibertyDaily
By Jack Phillips

A top World Health Organization (WHO) official conceded that everyone who gets a monkeypox vaccine is essentially part of a “clinical trial” to collect information on whether the shot is effective.

The comments came as the agency’s Director-General, Tedros Adhanom Ghebreyesus, overruled a WHO advisory panel and declared monkeypox a global health emergency, which is the agency’s highest level alert. The last time the WHO issued such an emergency was in early 2020 when it made the same declaration for COVID-19.

Tim Nguyen, the head of the WHO’s infectious hazards preparedness agency, said the monkeypox vaccine’s efficacy isn’t known because it hasn’t been used on a large scale before.

“I would like to underline one thing that is very important to WHO. We do have uncertainty around the effectiveness of these vaccines because they haven’t been used in this context and in this scale before,” Nguyen said Saturday.

Nguyen then said that “when these vaccines are being delivered, that they are delivered in the context of clinical trial studies and prospectively collecting this data to increase our understanding of the effectiveness of these vaccines.”

So far this year, there have been more than 16,000 cases of monkeypox in more than 75 countries, and five deaths in Africa. The viral disease has been spreading chiefly in homosexual men in the recent outbreak outside Africa where it is endemic.

In declaring the emergency, Tedros noted that “for the moment this is an outbreak that is concentrated among” homosexuals and “especially those with multiple sexual partners.” Before 2022, the virus was primarily relegated to western and central Africa, where the disease is endemic.

According to the U.S. Centers for Disease Control and Prevention (CDC), the Food and Drug Administration has licensed two vaccines for monkeypox: ACAM2000, known as Imvamune or Imvanex, and JYNNEOS.

Many of the U.S. monkeypox cases are located in New York City, according to officials. The city’s health agency said that it obtained more JYNNEOS vaccines.

“The NY Health Department announced plans for its next allocation of the JYNNEOS vaccine,” the New York City Health Department said in a statement on July 21. “Approximately 26,000 additional doses were delivered to New York City as part of Phase 2b from the federal government and state, and will be distributed via clinics, mass vaccination sites and community-based referrals. Individuals will be able to book appointments for July 24 through August 13.”

Europe, meanwhile, is the epicenter of the monkeypox epidemic, officials have said. Tedros said Saturday that “WHO’s assessment is that the risk of monkeypox is moderate globally and in all regions, except in the European region where we assess the risk as high.”

But last week, the CDC confirmed its first cases in children in two separate states. It’s not clear how the children contracted the virus.