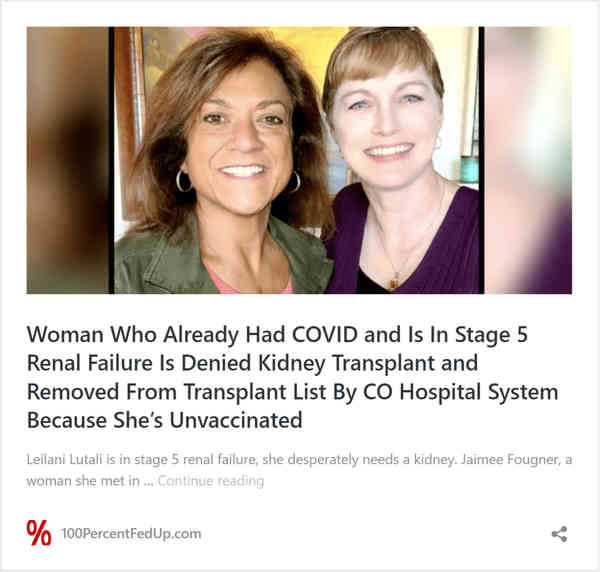 James Jooyandeh is a former tank commander who served for 13 years in the US Army. He is currently suffering from advanced pulmonary fibrosis. He is in desperate need of a lung transplant, but because he has not agreed to accept a COVID jab, the US Department of Veterans Affairs has refused to perform the life-saving surgery. The US Army has rejected the religious exemption request by Jooyandeh, who has expressed his concern over the use of fetal cell lines used to create the COVID vaccine.

Epoch Times reports – “Unfortunately, we are unable to offer lung transplant as a treatment option for you due to your unwillingness to receive recommended routine health maintenance, including your vaccinations, which is an absolute contraindication to lung transplantation at our center,” wrote Jooyandeh’s primary care physician Dr. Samir Sultan, a transplant pulmonologist with the VA hospital in Wisconsin, and Dr. James Maloney, chief of surgical services at the Veterans Hospital.

In an exclusive interview with The EpochTimes, Jooyandeh and his wife Deborah told The Epoch Times they are both against the COVID-19 vaccine because fetal cell lines were used in the development and testing of the vaccine and because of the vaccine’s potential health risks.

“One of the side effects that was just released was interstitial lung disease, and that’s what we have,” Deborah Jooyandeh told The Epoch Times, “so why would he take a vaccine that causes what’s killing him.”

Jooyandeh said he is also feeling “slighted” by the very administration he for so long served. Following a 13-year tour in the U.S. Army, Jooyaneh served eight years in the National Guard and five years in the Army Reserve.

Now 52, as a civilian, he worked as a merchandiser for Nestle and does not have the means to afford a lung transplant out of pocket. His only choice is to use his VA benefits.

In order to do that, a VA doctor must write a referral to a facility since VA hospitals do not perform transplants themselves. The VA mostly refers veterans in need of transplants to Vanderbilt University Hospital in Tennessee.

Vanderbilt does not require the COVID-19 vaccine for transplant patients, but Sultan, as records show, still refused to make the referral.

Sadly, these stories are all too common. We reported on several heartbreaking cases of organ transplant denials over the patient’s COVID vaccination status.

In October 2021, we reported about a woman who already had COVID and was in stage 5 renal failure and was denied a kidney transplant and was removed from the transplant list by the hospital system because she was unvaccinated. In January, we reported about a Boston hospital that removed a gravely ill father of two from their heart donor list because he was unvaccinated. One month later, we reported about a 3-yr-old boy who was refused a heart transplant in 3 different countries because he was unvaccinated.