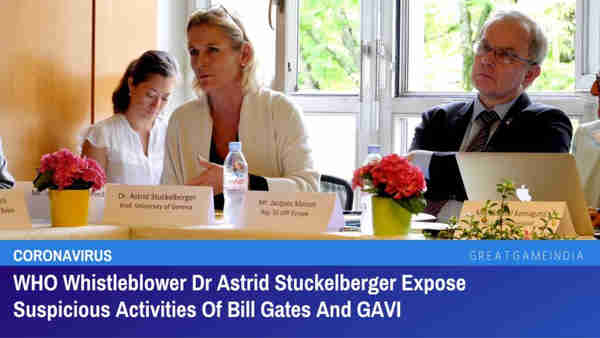 Epidemiologist Dr. Astrid Stuckelberger appeared on an episode of “Conversations That Matter” with The New American magazine’s Alex Newman to discuss the World Health Organization (WHO), a product of the United Nations that she says represents the “tip of the spear” for global tyranny.

Right now, the WHO is attempting to usurp for itself even more power over the world with a new international health regime proposal that would grant the entity more control over public health.

Stuckelberger had been working directly with the WHO throughout the plandemic to form public health policy, and what she saw during that time with the push towards global totalitarianism apparently shocked her, causing her to become a whistleblower.

One major thing she took issue with was the use of PCR tests, which are not meant to be diagnostic tools. Stuckelberger says it was “very strange” that these were used since they have “no validity” in verifying the presence of covid disease.

“We have never seen that in the WHO that the test and the diagnostic technology – it’s not a diagnostic actually; it’s a technology for research that suddenly becomes the tool of the world the tool of WHO to prove ‘cases,’ and ‘cases’ were transformed into sick people, and contagious, and asymptomatic … and that was one thing that was very disturbing.”

Stuckelberger went on to discuss how the WHO was “creating fear” from the very beginning, which violates the WHO’s own 2005 International Health Regulations, which task the entity with communicating ethically, not for shock value to push some ulterior agenda. (Related: The WHO is also involved in bioweapons research.)

Until it is proven to exist, there is no such thing as “covid,” scientifically speaking

Even though SARS-CoV-2 has never been isolated, purified or analyzed, the WHO ran with the lockdown narrative almost immediately out of the gate. And much of the world followed suit, especially throughout the West.

The WHO’s power and influence in this regard is why Stuckelberger says that the WHO is the “tip of the spear” of a global tyranny matrix in which all member countries just obey without question.

“WHO gave directives that were totally non-commensurate with the research,” Stuckelberger says.

“They did not give the data that there is a causality between a coronavirus and the sickness, which usually you have to purify, take pictures of, study and replicate in animals … and we never had this.”

Stuckelberger says that normally there is an extensive process involved with identifying a perceived threat and determining the risks involved. Instead of going through that process, the WHO just went ahead and promoted lockdowns and the halting of the global economy.

“What you basically have to do is not stop commerce and trade, and not lock down people immediately – that’s the thing to avoid,” she says. “Everything looked very suspicious to me from the beginning.”

“The house of cards is falling down, and what we do will echo after that,” Stuckelberger says.

There were many red flags right from the start that caught Stuckelberger’s attention. And as she put the pieces together, she came to the realization that fraud was more than likely involved with the WHO’s plandemic response.

“The more you put the pieces together, the more (you see that) it’s deliberate,” she says. “And now we have the proof from the U.S. that it has leaked from a Wuhan lab – it didn’t actually leak, though, it was an intentional spread.”

Be sure to check out the full interview with Stuckelberger and Newman at The New American website.

More related news can be found at Fascism.news.