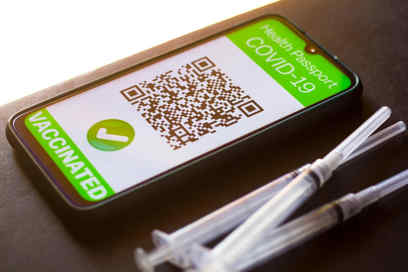 Good evening everyone and welcome to the Worldview Report.

With little fanfare, Ukraine became the first country to implement the World Economic Forum’s Great Reset by setting up a social-credit application combining Universal Basic Income, a Digital Identity and a Vaccine Passport all within one app on citizens’ cellphones, reports the Australian National Review.

This is part of an agenda that has been pushed by the United Nations and World Economic Forum since well before the onset of Covid.

Governments want to move toward the digitization of everyday life with all services accessed by citizens through a universal digital ID verification system that includes all your personal data stored on a QR code. Eventually, the World Economic Forum’s chief adviser, Noah Yuval Harari, has predicted that this surveillance mechanism will be “under the skin.”

When the European Union announced a test to digitize vaccination records, merging it with digital wallet and identification in 2018, Ukraine was quick to react, almost two years ago, with a phone app called Diia.

Since then, the platform has continued to evolve. Ukrainians can download Diia and store reams of official information, with the lure of being able to quickly and easily carry out most administrative procedures ranging from paying their taxes to renewing their identity papers, the payment of fines or receiving social benefits. In all, nearly 50 services can now be reached from the application.

With the onset of Covid, the government announced that the payment of benefits will be conditional on the presence of a vaccination certificate.

Poland also has a mobile application similar to that of Ukraine, which was launched at the end of 2019. The Polish app displays seven digital documents and allows users to identify themselves with a digital ID card.

Meanwhile, citizens in the United Kingdom and the United Arab Emirates can use electronic passports to check in and go through security at airports. This same system is coming to the U.S. soon compliments of Apple Wallet and other platforms.

In China, citizens have access to identity cards integrated into a mobile application. Users can use it to identify themselves when they register in a hotel or to benefit from certain government services, with a points system that allows them to gain additional privileges for “good behavior.”

That’s our broadcast for tonight. Tune in again next time and until then, good night from everyone at the Worldview Report. Take care.

Your Tax Deductible Support at www.wvwfoundation.com

Helps Us Cover Our Huge Streaming Bill So You and Millions of Americans Can Watch Our TV Shows For Free. Many organizations put all their shows behind a pay-wall immediately but we make our shows available for all to watch as a public and educational service of WVW-TV and WVW Foundation. You can also use our mailing address to send your tax deductible support:

In 2016, WVW-TV began to urge our radio and television audience to prepare for increasingly uncertain times such as:

Then, 2020 happened with the biological attack on America by Communist China through Covid-19. Finding hamburger meat, a can of soup, pasta, a can of tuna, and other basics became shockingly challenging.

Those who had mocked our organization for calling on our audience to prepare with an emergency food supply were no longer laughing at us. In fact, some of them began to order emergency food from our store.

I have enjoyed Mountain House food on camping trips going back to when I was in high school. I purchased 6 months of food for 5 people in April of 2013 for my family. Three and a half years later, Worldview Weekend became a distributor for Mountain House because we personally know and testify to the quality of the food and understand the need for families to have “food insurance” in an increasingly dangerous world.

to place your order while we have the inventory or go directly to this link: https://shop.worldviewweekend.com/products/cat/14841

Your purchase of emergency, freeze dried food will not only support your family, but you will also be supporting the continuation of WVW Broadcast Network and all our free radio and television programs through your purchase.

Get your free, no obligation packet on precious metals by texting or calling Wes Petes with Swiss America at 602-558-8585