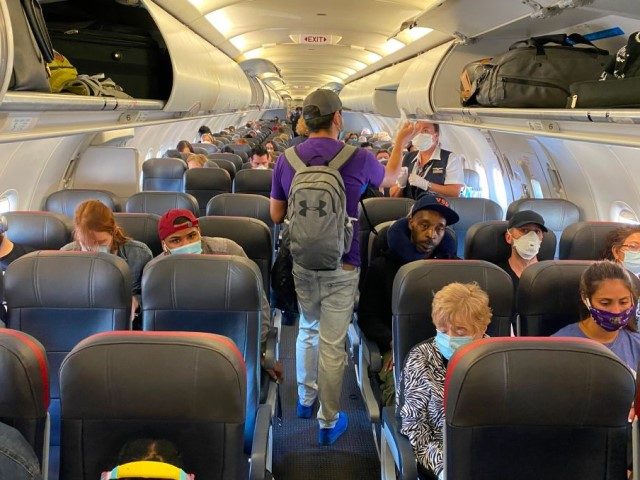 The lawsuit, filed in the Northern District of Texas by powerhouse D.C. law firm Schaerr Jaffe, alleges that Biden’s mask mandate for air travel violates the Administrative Procedure Act (APA) because it is “arbitrary and capricious,” and not supported by science. The complaint argues that there is “no significant link between wearing masks and slowing the spread of COVID-19,” and noted that the air on commercial airlines is among the “cleanest and safest of any environment on earth.” The filing also points to “growing scientific literature” documenting the harms of mask wearing, especially for children.

In an exclusive statement to Breitbart News on Thursday, FRC Action President Tony Perkins slammed the Biden administration and local governments across the United States, saying they have “exploited” the pandemic to “suffocate freedoms.”

“Given what we have learned over the past two years, this overreaching government mask mandate on the 2.9 million Americans who fly on a typical day is not based on science. In some cases, masks have actually proven detrimental to adults and children. Air in airplanes is filtered at a more frequent rate than even hospitals, and it is one of the least conducive environments for the spreading of a virus,” Perkins said.

“FRC Action believes these authoritarian mandates must be challenged. The Biden administration, along with a number of other local governments across the country, has exploited the COVID pandemic, used it to suffocate our freedoms unnecessarily, and in some cases target churches and people of faith,” he continued.

The lawsuit revolves around an executive order Biden issued the day after his inauguration, Executive Order 13998, in which he instructed the U.S. Departments of Transportation (DOT), Health and Human Services (HHS), and Homeland Security (DHS), as well as their components the Federal Aviation Administration (FAA), Centers for Disease Control and Prevention (CDC), and Transportation Security Administration (TSA) to continue mandating mask wearing on commercial airlines in the United States. The order was set to expire on March 18, but Biden extended the order until April 18 “with no assurance that the mandate will expire at that time,” the complaint states.

The plaintiffs, among whom are Perkins’ teenage son and another member of FRC Action, argue that none of them would wear a mask on upcoming flights, were it not for Biden’s executive order. The lawsuit points to various articles and research that show that “masks are actually ineffective, particularly the cloth masks and surgical masks commonly worn” and that prolonged use of masks can harm the wearers.

“Given that wearing cloth or surgical masks satisfy the Mask Mandate, it is not effective at stopping COVID-19 in airports or on airplanes,” the complaint states.

“The Mask Mandate is harmful to children. Forcing children to wear masks comes with a variety of health risks: skin issues, carbon dioxide in the blood, anxiety and depression, which outweighs [sic] the mild benefits for children,” the lawsuit continues. “Some of the data regarding children does not specify whether the harm to children is specifically due to the wearing of masks, but is relevant to assessing the potential impact of the Mask Mandate.”

Rep. Krause also gave an exclusive statement to Breitbart News, saying Biden’s mandate is “not tethered to science or facts.”

“President Biden and his administration have become more and more comfortable ignoring federal laws in order to pursue a progressive agenda not tethered to science or facts,” the lawmaker said. “The airport and airplane mask mandates are further evidence of his arbitrary and capricious decision making. I am proud to stand with my friends at FRC Action against yet another unconstitutional action by President Biden.”

Overall, the plaintiffs are asking the court not to “defer to the agency’s conclusory or unsupported suppositions,” and emphasized their point by noting that the government has not updated its policy to include recently confirmed medical science regarding children’s lower risk from the virus, heightened risks from mask wearing, and natural immunity.

“Defendants likewise failed to consider the U.S. Government’s own DARPA [a U.S. Dept. of Defense agency] study regarding the miniscule risk of contracting COVID-19 on a commercial aircraft. These facts alone should result in a holding of arbitrary and capricious,” the filings reads.

The lawsuit was filed soon after several U.S. airlines sent a letter to President Joe Biden, asking him to drop his federal mask mandate for aircraft and international testing requirements.

“It makes no sense that people are still required to wear masks on airplanes, yet are allowed to congregate in crowded restaurants, schools and at sporting events without masks, despite none of these venues having the protective air filtration system that aircraft do,” the letter from CEOs from American Airlines, United Airlines, Southwest Airlines, JetBlue, and others said in the letter, also dated Wednesday.

The case is Family Research Council Action Inc. v. Biden, No. 4:22-cv-209 in the United State District Court for the Northern District of Texas.