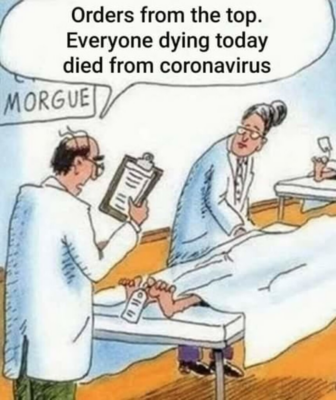 According to the CDC, tens of thousands of deaths previously attributed to COVID19 were officially caused by something else. They made the change Wednesday to much fanfare and public interest.

Neither our state’s biggest newspaper nor its only actual network TV station mentioned it. The Union Leader did have an article on March 15, the date of the CDC release, that included the letters CDC adjacent to each other. It was about the resumption of public tours of the White House.

Their lack of curiosity is not surprising but this is big. We are not talking about some tiny tweak.

The health agency quietly made the change on its data tracker website on March 15.

“Data on deaths were adjusted after resolving a coding logic error. This resulted in decreased death counts across all demographic categories,” the CDC says on the site. …

Before the change, the CDC listed 1,755 children as dying from COVID-19 along with approximately 851,000 others, according to Kelley Krohnert, a Georgia resident who has been tracking the updates. The update saw the CDC cut 416 deaths among children and over 71,000 elsewhere …”

This is not the first time they’ve lowered  them, and baby, it won’t be the last, because the Winston Smiths at the CDC have to follow orders.

The money has been laundered, the political goals of the moment achieved, it is time to quietly rewrite some history.

And no, the corporate media will not be advertising this correction, but it should. The change in deaths among minors just decreased by 23.7%. Nearly a quarter of all adolescent deaths attributed to COVID – probably to advance the Jab the Kiddies Agenda – were not the result of the so-called pandemic.

Can anyone say fraud, speaking of which, does this mean the hospitals that misreported these deaths have to return the money?

Billions of your dollars got laundered through the health care industrial complex for reporting cases, following CDC treatment guidelines, and deaths resulting from (reported as) COVID19.

Should we get some of that back?

And when can we expect the next adjustment, not that anyone in the so-called media will report that either?

Note: The Featured Image was first shared on ‘Grok Facebook on April 7, 2020. The comments thread makes for some amusing reading.