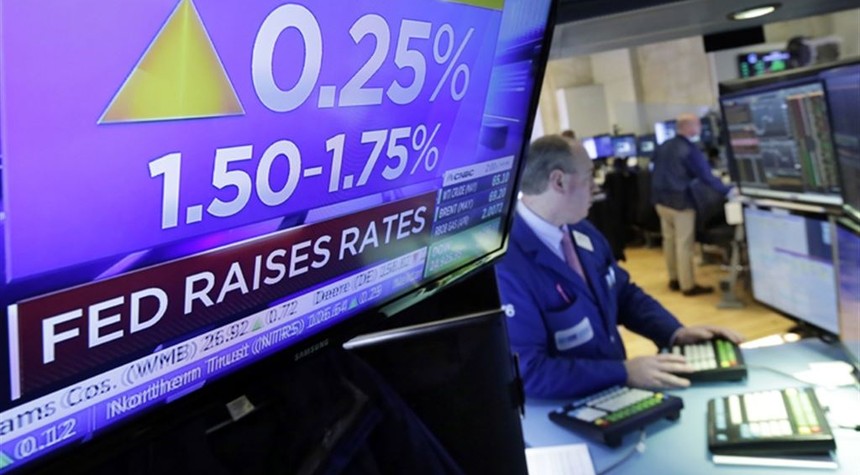 Just nine days ago, I wrote an article about Federal Reserve Chairman Jerome Powell breaking with Joe Biden on the clueless president’s ridiculous buck-passing claim that Russian President Vladimir Putin is responsible for skyrocketing gas prices in America — vs. the real culprit,  Biden’s war on energy.

I hereby withdraw any credit I gave Powell in the above article.

Why the sudden turnabout? During a recent interview, Powell blamed the worst inflation in 40 years on the unvaxxed among us. Yep, the cause of Bidenflation falls at the feet of unvaccinated Americans, folks.

Here’s Powell:
What did we get wrong? And that really was looking at these supply-side issues and believing that they would be resolved relatively quickly.

By that I mean there were gonna be vaccinations — everyone would get vaccinated — so the millions of people who dropped out of the labor force would come right back in, so wages wouldn’t be under such pressure. That didn’t happen.
Um, what about the never-ending lockdowns and Biden’s constant attempts to scare the bejesus out of everyday Americans, etc., Mr. Secretary? You know, ridiculous stuff like your boss’s “winter of severe illness and death” silliness? Yeah.

Powell continued to dig deeper. [Spoiler: Back to Putin.] In addition, the bottlenecks and the shortages haven’t been alleviated yet, and on the back of that comes the new shock, in the form of the war. Um, but so we — it wasn’t something wrong with our model, because it wasn’t in the models, at all.
So what was it, then?
It was a question of how to assess the persistence of these supply-side shocks. And I do think that there’ll be — that there is a lot of work going on to get smarter about the supply side.

In the nature of it, though, it was a deep-in-tail kind of a risk, and those are very hard to predict and assess when they come.

Incredible. Powell unwittingly copped to his incompetence, that of his team at the Fed, and the overall incompetence of the Biden administration as a whole. Nicely done, Mr. Secretary.

The @federalreserve’s Powell blames Americans not getting sufficiently vaccinated for his inflation crisis. pic.twitter.com/GmdJjrn2Hf

— Tom Elliott (@tomselliott) June 29, 2022
What Powell didn’t admit was the reality of “a lot of work [also] going on” within the Biden administration to purposely destabilize as much of America as possible, beginning with the Biden Border Crisis, Biden Energy Crisis, Bidenomics, and of course, Bidenflation.

A September 2021 Yale study found instances in which fully-vaccinated individuals who became infected by SARS-CoV-2 became particularly vulnerable to the serious strain of the virus.

As I reported in November 2021, a study in Vermont found that COVID cases surged in the state — the most-vaccinated state in America, clocking in at 71.5 percent of Vermont’s total population.

And my favorite, as described by my colleague Jim Thompson in mid-June: Tony Fauci, the Quadruple Vaxed, Double Masked Oracle of Nonsense, Has COVID.

In May, as RedState reported, Federal Reserve economists destroyed Biden’s oft-made charge that “oil company profiteering” was to blame for out-of-control gas prices.

And, as RedState reported, way back in March, not even CNN was buying Biden’s inflation excuse — namely the ridiculous “Putin price hikes” nonsense.

Joe Biden’s far-left-wing handlers have done their damnedest to destroy America as we know it from the clueless president’s first day in office.

Terrified of the upcoming midterm elections, in which they will likely get their asses handed to them, and in the long run, terrified by an addled clueless president who insists he running for reelection in 2024.

Meanwhile, there’s gotta be something we can do to those damn anti-vaxxers before they ruin everything.