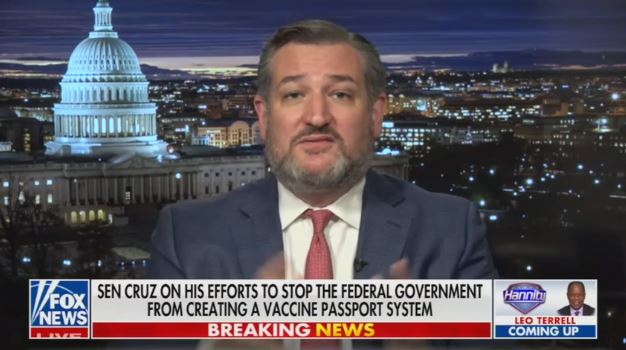 Now, that doesn’t mean, as the media likes to characterize, that I’m opposed to vaccines. I actually think vaccines are terrific. I’ve taken the vaccine. My family’s taken the vaccine. But I believe in individual choice, individual responsibility. You can make the choice for your family. These mandates are coming. And as you noted a few minutes ago, talking about Dr. Fauci, what they’re talking about is political. It’s not tied to the science.

One example — Dr. Fauci and the CDC and the Biden administration repeatedly ignores natural immunity. It ignores the immunity of tens of millions of people who’ve had COVID. That’s politically inconvenient, so they pretend it doesn’t exist.

Cruz noted that Fauci supports mask mandates in the nation’s schools. On Tuesday, in fact, Fauci told MSNBC’s “Morning Joe” he agrees with teachers’ union leaders who say that vaccination should be required for teachers:

“This is very serious business,” Fauci said. “You would wish that people would see why it’s so important to get vaccinated.”

And while the federal government cannot issue such mandates, local governments can and should, Fauci said. “I’m sorry, I mean, I know people like to have their individual freedom and not be told to do something, but I think we’re in such a serious situation now, that under certain circumstances, mandates should be done.”

Cruz said Fauci is catering to the teachers’ unions, who are making “a political demand” for which there is “no scientific basis.”

“And I think this is just abusive,” Cruz continued. “It is dangerous where these government figures believe they have the right to impose rules on you — rules that they don’t intend to follow, as all the people partying up at Martha’s Vineyard demonstrated.”

And it would be one thing, look, if we were dealing with the zombie apocalypse where anyone who came near this was dropping dead. You can understand at least why they were proposing some of this stuff. But they know what they’re saying is nonsense.

The reason that Barack Obama’s party is so revealing is that when they’re alone, the Democrats demonstrate they think all of this is nonsense. They take off their mask and they party like it’s 1999. You know, they know this is a crock.

In the Senate, the Senate Democrats who pontificate, when they get in a room, they take their damn masks off. When the TV cameras turn on, apparently it’s only dangerous to be without a mask if a TV camera is pointed at you.

Unsurprisingly, Cruz said not a single Democrat is supporting his proposed ban on COVID mandates. He said one Democrat (Sen. Brian Schatz of Hawaii) showed interest in joining Cruz in a sense-of-the-Senate motion to end the mask mandate imposed by airlines, but in the end, Schatz backed off:

That’s because his fellow Democrats “cracked the whip,” Cruz said:

“There’s a herd mentality among congressional Democrats that they obey Chuck Schumer, and their only answer is, ‘Sir, yes, Sir.'”