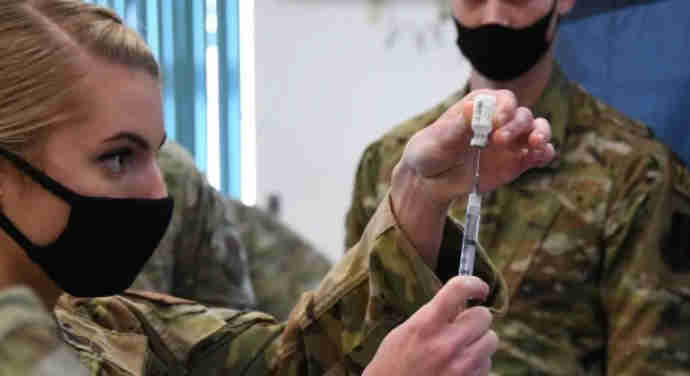 Over 500 service members filed a suit against the government on Monday.  These individuals argue that the vaccine mandate forced on the military was not approved and therefore should never have been administered to the military.

Around 520 military service members filed a suit on Monday against the government.  Their primary argument is that the vaccine mandate is illegal because there is no approved vaccine available in the US. This means that approximately 55% ( amount vaccinated since the August 23, 2021 mandate from the Secretary of Defense (SecDef) ) of the military have been vaccinated illegally and under duress.

See the court filing below.


This case comes after last week’s ruling where a Navy Officer was found innocent of wrongdoing when he didn’t take the COVID vaccine.  The Officer in the case, LT Bill Moseley, claimed he had the duty to not take the vaccine since the one administered by the military was not approved by the FDA.

On May 20, a Navy Administrative Board determined in a 3-0 vote that a lieutenant did not commit any misconduct by refusing to take the COVID-19 vaccine and is permitted to continue serving.

Attorney R. Davis Younts – who represented the lieutenant involved in the case – told The National Desk, “In a groundbreaking case involving the military vaccine mandate, we achieved a critical victory for our client LT Bill Moseley. He will be able to continue his service in the United States Navy. A Navy Administrative Board found by a vote of 3-0 that refusing the vaccine was not misconduct.”

During the hearings, Younts argued that the COVID-19 vaccine mandate for U.S. military service members was not lawful, and reportedly highlighted that the military failed to make available the FDA-approved version of the vaccine.

According to a press release published by Younts, Lt. Moseley asserted that he could not take the vaccine for religious reasons, but decided not to submit an exemption request when he found out that the U.S. military was denying nearly all requests.

“After consulting with legal and medical experts, he became convinced that as an officer he had an obligation to take a stand against the unlawful order and be a voice for thousands of enlisted Sailors,” Younts’ said. “LT Moseley risked his twenty-two-year career and his military retirement because of his faith and his commitment to his oath of office as a military leader.”