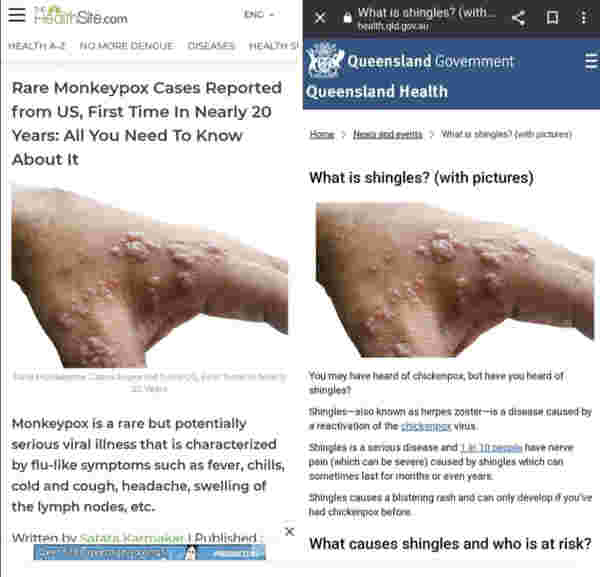 Will the blatant fearporn ever stop? The controlled media have no shame. If Ronald Reagan were still with us, I suspect we would be hearing “There you go again” replays. First came the coordinated media blast of public health-related fearporn. For example, the image from Jake Tapper’s CNN broadcast program “The Lead” of May 20,2022 (above) which appears to me to be a case of smallpox, not monkeypox. Another example involves the self-explanatory paired images below. And of course the Bill and Melinda Gates – funded GAVI text which is quite blatant, claiming 10% mortality, which I covered in my prior substack article concerning Monkeypox and fearporn.

I almost cannot believe that I am writing this, but since my original substack article on this topic, we had the reveal of an Event 201-style wargame exercise modeled around a bioterror-related release of an engineered Monkeypox virus “caused by a terrorist attack using a pathogen engineered in a laboratory with inadequate biosafety and biosecurity provisions and weak oversight.” With amazing (coincidental?) prescience, the “table top exercise” of March 2021 (one year and three months into the Covidcrisis) models a Monkeypox bioterror attack initiated on May 15, 2022. Note the date of the CNN/Jake Tapper fearporn piece – May 20, 2022. The modeling deployed in the scenario upon which the “exercise” was based predicts 3.2 billion cases and 271 million deaths by December 01, 2023. Of course, the predictive accuracy of the simplistic public health models such as that used to support this scenario have repeatedly proven to be absolutely horrid, and these types of models should be either relegated to the trash heap (or ongoing dumpster fire) as unscientific speculation which is all too frequently weaponized by the fearporn peddlers such as CNN, MSNBC, NYT, Washington Post. By now we all know the usual USG and WEF-controlled media players. Nothing happens by chance.

As we now know, the amazing foresight of this modeled date immediately preceded a seminal WHO meeting which has just concluded, in which international health regulation (IHR) modifications which would grant the WHO unprecedented powers to bypass national constitutions (proposed on January 23, 2022 by the US HHS) were actively considered but tabled for a future meeting (~November 2022?) largely due to African nation concerns regarding infringement of national sovereignty. The stated purpose of the “exercise” was remarkably well aligned with the stated objectives and topics proposed by US HHS in the submitted IHR modifications: So, do we have yet another example of a “Plandemic”? All I can say is ~

“Oh! What a tangled web we weave, when first we practice to deceive”

Or perhaps the more appropriate quote would be ~

The Italians having a Proverb, “He that deceives me once, its’ his fault; but if twice, its’ my fault.”

Anthony Weldon, The Court and Character of King James (1651)

In my prior substack entitled “Monkey Pox, Truth versus Fearporn”, I concluded the essay with the following caveat:

Unless there has been some genetic alteration, either through evolution or intentional genetic manipulation, it is not a significant biothreat, and has never been considered a high threat pathogen in the past.

Just to set the stage, the outbreak seems to be tightly associated with a point of origin at what appear to have been two large European dance party events (“Raves”), in the Canary Islands (“Gay Pride event in the Canary Islands, which drew some 80,000 people”) and “a Madrid sauna”. The Canary Islands event was the 20th anniversary of “Maspalomas Gay Pride”, which took place from May 05 to May 15 (the precise date of the previously modeled Monkeypox bioweapon release). The organizers anticipated “a huge parade with over 100,000 participants, boat trips, pool parties and more!”. So, basically, pretty much a perfect opportunity for a Monkeypox super spreader event, whether intentional or inadvertent. Donning my “cynical skeptic” tinfoil hat for a moment, if one was looking for an opportunity to seek a pathogen into a highly mobile international population, mindful of the early history of HIV-based AIDS, this would be just what the doctor (Mengle…) ordered.

Multiple cases were soon detected in Portugal, and to their great credit, INSA Portugal got busy and promptly did the deep sequencing necessary to enable building a phylogenic map of the Monkeypox variant associated with the outbreak.

Based on their findings, they have rapidly disclosed both their data as well as a series of startling hypothesis regarding the origin of the currently circulating Monkeypox (West African Clade) Monkeypox. Cutting to the chase, having reviewed their data and paper, I now have to conclude that one of the many “working hypotheses” concerning the origin of this particular virus must be that it is the product of laboratory-based manipulation – precisely as previously modeled by the Nuclear Threat Initiative (NTI):Bio/Munich Security Conference . True story. Truth continues to be stranger than fiction.

The authors briefly (and elegantly) summarize the study purpose and methods as follows:

Following the (First draft genome sequence of Monkeypox virus associated with the suspected multi-country outbreak, May 2022 (confirmed case in Portugal) 184), we now release 9 additional genome sequences of Monkeypox virus causing a multi-country outbreak. These sequences were obtained from clinical specimens collected from 9 patients on May 15th and 17th, 2022 through high throughput shotgun metagenomics using Illumina technology (see details bellow), with depth of coverage throughout Monkeypox genome ranging from 38x to 508x (mean of 201x).

They then proceed to raise the following main observations:

Those not versed in academic science talk may be shaking their head by this point, and probably getting ready to post a comment along the lines of “Why don’t you just tell us that this means in simple language?”

So, at the risk of oversimplification:

In conclusion, the preponderance of current evidence is pointing towards a hypothesis for the origin of this outbreak which is increasingly consistent with prior “war game” scenario planning, remarkably akin to that which occurred during Event 201, which posits emergence of an engineered Monkeypox virus into the human population during mid-May of 2022.

Draw your own conclusions, and do your own diligence.