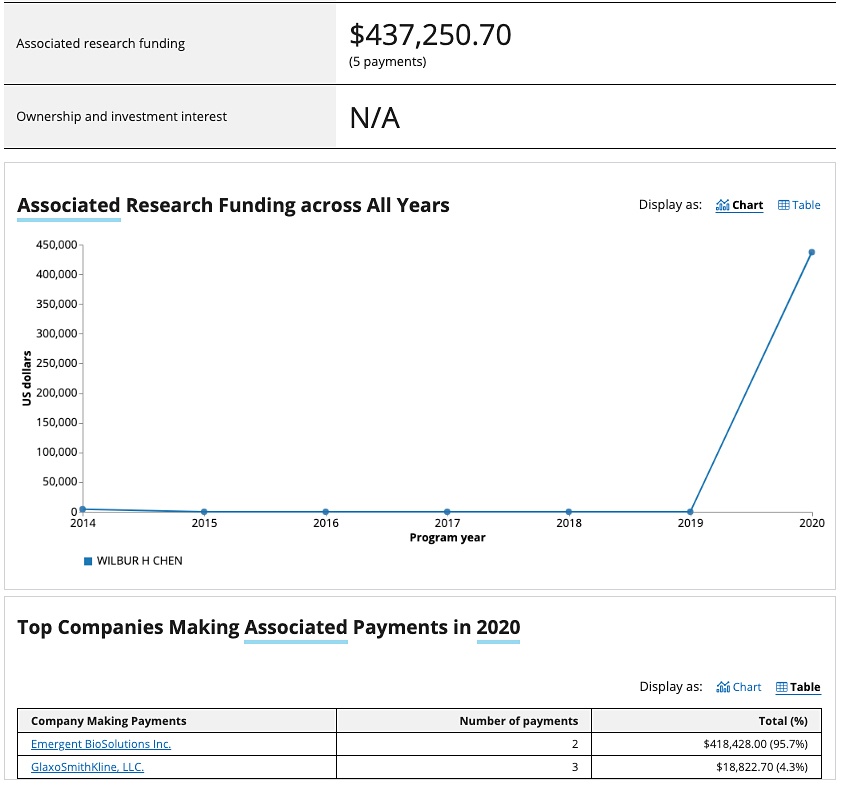 Such blatant conflicts of interests should not be allowed in powerful government bodies.

Do you prefer direct links to content? Check out our brand new sister site at Uncanceled.news.

Dr. Wilbur H. Chen has a problem. On one hand, he is on the Advisory Committee on Immunization Practices which is responsible for approving vaccines on behalf of the CDC. On the other hand, he has a thriving medical business that requires funds to operate properly. This may not seem to be a problem until we realize that $437,250 of the funds paid to him last year were from companies that manufacture vaccines.

If they’re going to get their vaccines approved, they’ll have to go through Dr. Chen and his advisory committee. In the good ol’ days, we would call this a conflict of interest.

In regards to Covid-19 and the so-called “vaccines” that the CDC has been pushing on us, we do not expect that Dr. Chen or his cohorts would have acted any differently if he wasn’t being paid. They’re being controlled by bigger fish than a few pharmaceutical companies. Nevertheless, this conflict of interest demonstrates how little regard is paid by our government to make sure the “experts” and bureaucrats are making decisions that benefit us more than them.

We know with a near certainty that those who are still in positions of power to decide about vaccines, treatments, lockdowns, and mandates are all owned in whole or in part by either Big Pharma or the Powers and Principalities controlling them. This is why the anti-science mandates are flourishing. It’s why there are still face mask Karens scolding us when we’re caught without diapers over our nose and mouth. It’s why they choose to ignore natural immunity or the statistics that show the infinitesimal risk Covid-19 poses to children.

They have been given the mission to vaccinate every man, woman, and child on the face of the planet and they won’t allow facts or conflicts of interest to stand in their way.

The saddest part about Dr. Chen’s story is that it wasn’t divulged by either the ACIP or their overseers in the CDC. This had to be researched and exposed by average citizens who are doing the government’s job for them. One would think that a role as important as being one of the few members of the Advisory Committee on Immunization Practices would require complete detachment from vaccine makers, but the current agenda is too important to the powers-that-be to let a half-million dollars impact their progress.

Below is a story from Children’s Health Defense that goes into further details about Dr. Chen and the ACIP scandal. I call it a “scandal” only because it’s scandalous and not because I expect it to turn into anything substantial. Mainstream media won’t touch this story with a socially distanced ten-foot pole. As far as they’re concerned, they want everyone to believe there is nothing but honor and science and rainbows and butterflies making decisions on our behalf in the halls of healthcare governance.

Our betters at the CDC do not think we’re all stupid. They just know there are enough sheep in America who will obey their every command and who will help them segregate out the rest of us. We need to wake up as many people as possible to the corruption that drives decisions in and out of DC as it pertains to this so-called “pandemic.” It’s all Kabuki Theater, but far too many Americans are so busy watching the show that they don’t realize they’re getting conned by it all.

CDC’s Committee Member Dr. Chen Should Be Removed Immediately Due to Conflict of Interest

Dr. Wilbur H. Chen, whose conflicts of interest include accepting $437,250 from vaccine makers, should be removed immediately from the Advisory Committee on Immunization Practices.

Apparently, he’s also clairvoyant (like Santa) because he knows what you are writing before you even send it to him, so he has set up an auto-reply on his email account to let you know he’s very important, he gets lots of emails and he does not like “misinformation.”

Chen defines “misinformation” as anything that contradicts the Pharma narrative. Chen is adamant that nothing be allowed to pierce his protective Pharma information bubble.

I’m reminded of the phrase, “Methinks thou doth protest too much.”

What Chen is actually mad about is that he got caught with his hand in the cookie jar.

A search of the government website Open Payments reveals Chen accepted $437,250.70 from Emergent BioSolutions and GlaxoSmithKline (GSK) in 2020.

GSK is one of the four largest vaccine makers in the world. GSK makes the incredibly toxic Hep B vaccine (Engerix-B), the troubled HPV vaccine (Cervarix), a meningococcal vaccine that is loaded with aluminum (Bexsero) and various flu vaccines among others.

GSK is also working on a COVID-19 vaccine that is now in Phase 3 clinical trials.

All of GSK’s products must go before the Centers for Disease Control and Prevention (CDC) Advisory Committee on Immunization Practices (ACIP), that Chen sits on, in order to be approved.

Emergent BioSolutions is a contract manufacturer that makes vaccines for others including the Johnson & Johnson (J&J) COVID-19 vaccine that has been linked to blood clots and a bleeding disorder.

Emergent BioSolutions has an abysmal safety record. Even though federal regulators are generally like Mr. Magoo when it comes to spotting safety problems, the issues at Emergent’s plant in Baltimore were so egregious that earlier this year the U.S. Food and Drug Administration shut down the plant and ordered J&J to take it over and run it themselves.

This is completely unacceptable. According to the Bureau of Labor Statistics, there were 27,550 pediatricians employed in the U.S. There is absolutely no reason for the ACIP to utilize a person with such extensive financial conflicts of interest.

The CDC) must be above reproach in order to have any credibility with the general public. Sadly the CDC appears to do whatever it can get away with — a classic example of the fox guarding the henhouse.

The fact that these decisions involve the health of our children makes corruption all the more appalling.

Please contact the following four officials (as well your elected representatives) to let them know that you are troubled by Chen’s extensive financial conflicts of interest and please ask that he be removed from the ACIP before it meets on Tuesday, Nov. 2.

Centers for Disease Control and Prevention

It is beyond alarming that the ACIP has failed to properly monitor financial conflicts of interest amongst its members. All prior ACIP votes involving Chen should be reviewed by an independent outside review board to see if they must be thrown out because of this blatant corruption.

The CDC should also examine and release publicly all financial conflict of interest statements from all remaining ACIP members to determine if there are additional problems before Tuesday.