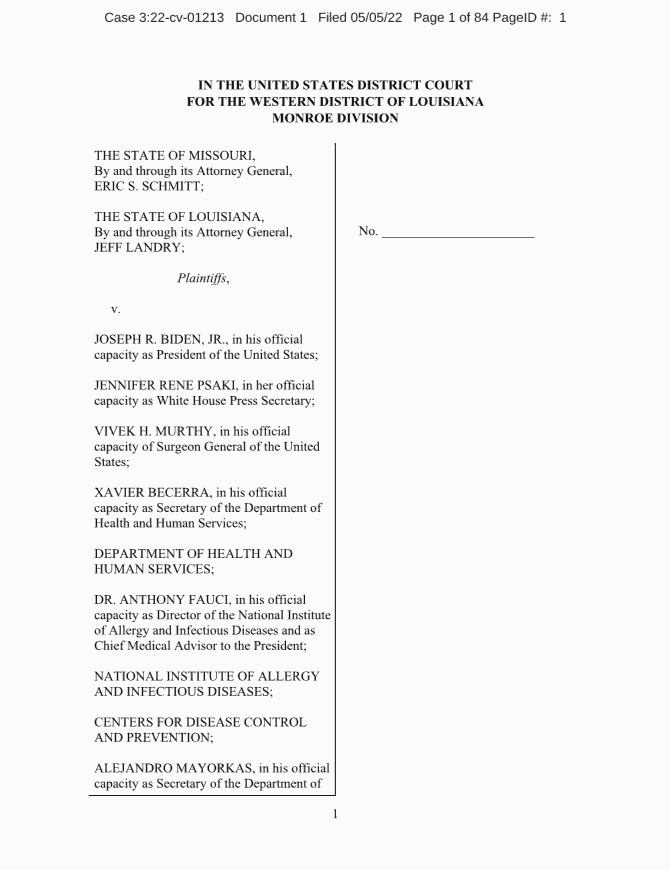 Afederal court has granted the request of two attorneys general for discovery and documents from top Biden officials and social media honchos so they can to get to the bottom of their collusion efforts to suppress and censor free speech.

In May, Attorneys General Eric Schmidt of Missouri and Jeff Landry of Louisiana filed suit against eight high-ranking Biden Administration officials, including Joe Biden, Jen Psaki, and Dr. Anthony Fauci, for allegedly colluding with social media giants to suppress freedom of speech under the pretense of combatting “misinformation.”

🚨BREAKING: Missouri and Louisiana just filed suit against Joe Biden, Jen Psaki, Dr. Fauci, and other top-ranking officials for allegedly colluding with social media companies to suppress freedom of speech under the guise of combating “misinformation.”

Judge Terry Doughty, of the U.S. District Court for the Western District of Louisiana, ruled on Tuesday that there is “good cause” for the discovery process, and set a timetable with specific deadlines for depositions.

Doughty said members of the Biden administration and Meta, Twitter and YouTube must turn over documents and answer questions within the next 30 days regarding their suppression of “disfavored speakers, viewpoints, and content on social medial platforms.”

“A federal court granted our request for discovery & documents from top ranking Biden officials & social media companies to get to the bottom of their collusion to suppress and censor free speech,” Schmitt said in a statement posted onto Twitter. “No one has had the chance to look under the hood before – now we do.”

🚨 BREAKING: A federal court granted our request for discovery & documents from top ranking Biden officials & social media companies to get to the bottom of their collusion to suppress & censor free speech.

No one has had the chance to look under the hood before – now we do. pic.twitter.com/TzrxtC3piN

He continued: “In May, Missouri and Louisiana filed suit against top-ranking Biden Administration officials for allegedly colluding with social media giants to suppress freedom of speech under the pretense of combatting “misinformation. In our lawsuit, we allege that top-ranking Biden Administration officials colluded with those social media companies to suppress speech about the Hunter Biden laptop story, the origins of COVID-19, the efficacy of masks, and election integrity.”

The lawsuit provides several examples of truthful information that was censored by social media companies who later admitted the content was truthful or credible, including:

The Hunter Biden Laptop Story: As the lawsuit notes, the New York Post published a story in October of 2020 detailing the contents of Hunter Biden’s laptop that was abandoned in a Delaware computer repair shop, which included compromising pictures and emails. Twitter locked the New York Post’s main Twitter account and blocked other users from publishing the link to the story as it was “potentially harmful.” Now, 17 months later, the New York Times and the Washington Post have both quietly published stories that acknowledge the truth and veracity of the New York Post’s original reporting.

The Lab Leak Theory: The lawsuit also cites Facebook’s censorship of posts that theorized that COVID-19 could have been leaked accidentally from a biotech lab in Wuhan, China. The suit states, “On information and belief, Dr. Anthony Fauci, a senior federal government official, coordinating with others, orchestrated a campaign to discredit the lab-leak hypothesis in early 2020… At the same time as he was orchestrating a campaign to falsely discredit the lab-leak theory, Dr. Fauci was exchanging emails with Mark Zuckerberg, the CEO of Facebook, regarding the control and dissemination of COVID-19 information.” Facebook then expanded its content moderation to censor posts that made claims that COVID-19 was lab or man-made. Only after a large number of major media outlets confirmed that the lab-leak theory was a possibility did Facebook stop censoring user posts related to the lab-leak theory.

The Efficacy of Masks: The lawsuit notes, Twitter’s “COVID-19 misleading information policy,” as of December 2021, noted that Twitter will censor (label or remove) speech claiming that “face masks … do not work to reduce transmission or to protect against COVID-19,” among many other restrictions. Other platforms had similar policies. Both Senator Rand Paul and Florida Governor Ron DeSantis were censored by Youtube for questioning the efficacy of masks. Further, the lawsuit cites a New York Post article that states, “When Scott Atlas, a member of the Trump White House’s coronavirus task force, questioned the efficacy of masks last year, Twitter removed his tweet.” Now, a growing body of science shows that masks, especially cloth masks, are ineffective at stopping the spread of COVID-19, and can impose negative impacts on children.

In their lawsuit, the AGs argue that the Biden regime colluded with big tech companies to censor and suppress opposing speech, directly working with executives and employees of the companies.

The lawsuit states: “For example, on January 17, 2020, then-candidate Biden stated, in an interview with the New York Times editorial board, that Section 230 of the CDA should be ‘revoked’ because social-media companies like Facebook did not do enough to censor supposedly false information… Candidate Biden also suggested that Facebook CEO Mark Zuckerberg should be subject to civil liability and even criminal prosecution for not censoring enough political speech.”

In a July 2021 press briefing, Press Secretary Jen Psaki and Surgeon General Vivek Murthy both argued that Facebook and other social media platforms should do more to combat health “misinformation.” The lawsuit states, “Surgeon General Murthy also stated that ‘we’re saying we expect more from our technology companies. …. We’re asking them to monitor misinformation more closely. We’re asking them to consistently take action against misinformation super-spreaders on their platforms.’” Further, “At the same press briefing, after the Surgeon General spoke, Defendant Psaki stated: ‘[W]e are in regular touch with these social media platforms, and those engagements typically happen through members of our senior staff, but also members of our COVID-19 team, given, as Dr. Murthy conveyed, this is a big issue of misinformation, specifically on the pandemic.’ She added, ‘We’re flagging problematic posts for Facebook that spread disinformation.’”

In response, Facebook stated that it was working with government officials to tackle “misinformation.” According to the lawsuit, “A Facebook spokesperson said the company has partnered with government experts, health authorities and researchers to take ‘aggressive action against misinformation about COVID-19 and vaccines to protect public health.’”

In a separate lawsuit, several anti-COVID vax doctors have sued Twitter for what they allege is unfair treatment and a “breach of contract.”

Doctors Robert Malone, Peter McCullough, and Brian Tyson are named as the plaintiffs in the lawsuit against Twitter. Two additional doctors are also named in a letter to the tech giant from lawyer Matthew P. Tyson, who is representing the docs. All but one of them have been permanently banned from Twitter for straying from the Regime narrative on the COVID shots.

“These are five of the most knowledgeable and helpful voices in the world regarding COVID-19 treatment,” Tyson wrote in the letter, which also names the late Vladimir Zelenko, MD, and George Fareed, MD.

The plaintiffs say in the lawsuit that they understand Twitter is a private company which states in its terms of service that it can suspend user accounts for “any or no reason.”

“However, Twitter also implemented specific community standards to limit COVID-19 misinformation on the platform,” the lawsuit reads, “and Twitter was bound to follow those terms. Twitter’s COVID-19 content moderation policies included takedown procedures for ineffective treatments and false diagnostic criteria, as well as measures for ‘labelling’ information as ‘misleading.’ Twitter established a five-strike policy as part of its COVID-19 misinformation guidelines.”

The lawsuit argues that a truthful tweet regarding COVID-19 treatment should not violate Twitters’ terms of service or community standards.

The doctors claim Twitter violated its own COVID-19 misinformation guidelines when it suspended the accounts of Drs. Zelenko, Malone, Fareed, Tyson, and McCullough. None of these physicians posted false or misleading information, nor did they receive five strikes before suspension, the lawsuit said.

Dr. McCullough, surprisingly, has not yet been banned from Twitter, even though he constantly posts content that is critical of the experimental COVID vaccines.

“Through discovery, [we] will learn how syndicate is collaborating to unfollow, block verification, suspend, delete user accounts are not aligned with the false govt biopharmaceutical complex narrative,” McCullough wrote on the platform. “Many players to be easily exposed.”

Twitter served lawsuit summons of complaint. Through discovery, will learn how syndicate is collaborating to unfollow, block verification, suspend, delete user accounts are not aligned with the false govt biopharmaceutical complex narrative. Many players to be easily exposed. pic.twitter.com/3FimAKATLC

Debra Heine is a conservative Catholic mom of six and longtime political pundit. She has written for several conservative news websites over the years, including Breitbart and PJ Media.