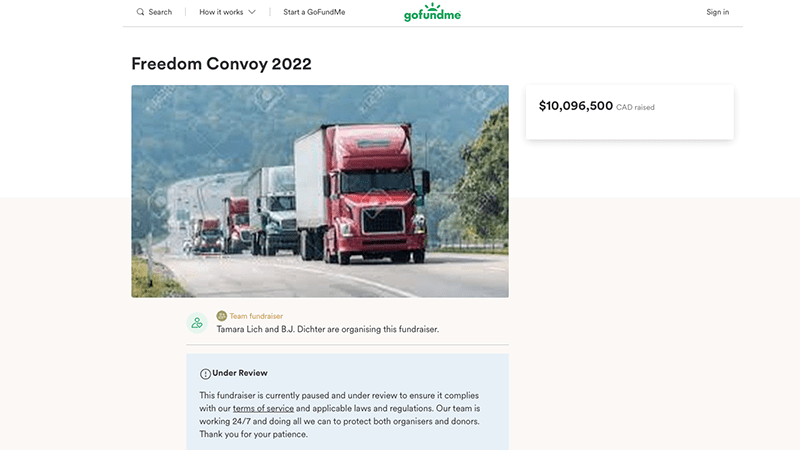 After Ottawa City Council demanded ‘pipeline of funding’ be cut off

GoFundMe has frozen the campaign of the Canadian trucker convoy after it raised over $10 million Canadian dollars following demands from Ottawa city officials for funding to be ‘cut off’ to the protesters.

As reported by the Daily Mail, the page for the convoy now states “This fundraiser is currently paused and under review to ensure it complies with our terms of service and applicable laws and regulations.”

“Our team is working 24/7 and doing all we can to protect both organizers and donors. Thank you for your patience,” the page also reads at time of writing.

As Fox News notes, despite being labelled a “fringe movement” by Canadian Prime Minister Justin Trudeau, the campaign for the truckers raised more money in the past fortnight than the amount raised by Canada’s major political parties in the whole of the last quarter.

The post states “Recent events in Ottawa, Canada, have generated widespread discussion about the Freedom Convoy 2022 fundraiser on GoFundMe. We wanted to provide clarity around the actions that our global Trust & Safety and Customer Care teams take every day, just as they have with the Freedom Convoy fundraiser.”

It adds “As the activity surrounding the protest evolves, we have been monitoring the fundraiser to ensure the funds are going to the intended recipients and that the fundraiser remains within our Terms of Service. Our monitoring includes maintaining close communication with the organizer as well as collaborating with local law enforcement.”

“This process takes time and may slow down the withdrawal process. If the fundraiser does violate our Terms of Service or does not directly benefit the intended beneficiary, we will remove it from the platform,” the post concludes.

The move to freeze the funding comes just hours after Ottawa City council member Diane Deans in a Zoom meeting called the truckers “mercenaries” and demanded that GoFundMe, under threat of legal action, cut off the “pipeline of funding” to the Freedom Convoy.

Ottawa City Council: “We need to cut off the pipeline of funding to these… mercenaries that are unlawfully protesting and occupying our communities.” pic.twitter.com/g2KvMrZIWK

The Canadian media is also suggesting that the Freedom Convoy movement is part of a conspiracy by “Russian actors.”

ALERT! In the age of mass Silicon Valley censorship It is crucial that we stay in touch.

We need you to sign up for our free newsletter here.

Support our sponsor – Turbo Force – a supercharged boost of clean energy without the comedown.