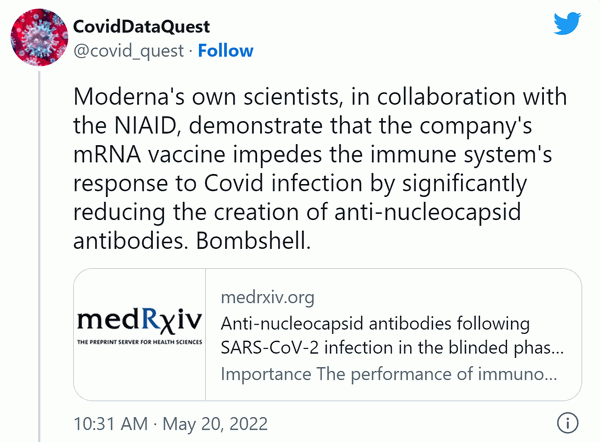 But immunologist cautions both sides read too much into “transient spike” in antibodies to justify their policy preferences.

A month before America’s top infectious disease bureaucrat conceded that mRNA vaccines offer only short-lived protection against COVID-19, Anthony Fauci’s researchers at the National Institute of Allergy and Infectious Disease (NIAID) offered a possible explanation why.

These vaccines target COVID’s spike protein, whereas natural immunity recognizes the whole of the virus, including the nucleocapsid protein that envelops the RNA core.

Among those infected during the “blinded phase” of Moderna’s 30,000-adult vaccine trial, only 40% of those given the vaccine developed anti-nucleocapsid antibodies. The figure was more than twice as high (93%) for those given the placebo.

While higher viral loads were associated with higher likelihood of developing anti-nucleocapsid antibodies, “viral copies at the illness visit did not fully explain the large difference” between vaccine and placebo groups, according to the preprint study, which hasn’t been peer-reviewed.

“While an increase in seroreversion cannot be ruled out, given the short time frame the more likely explanation is a vaccine-induced reduction in seroconversion,” or development of antibodies, the researchers wrote. The study period ended in March 2021, before the Delta and Omicron variants developed.

NIAID’s Biostatistics Research Branch collaborated with Moderna, Seattle’s Fred Hutchinson Cancer Research Center and the medical schools of Baylor, Cornell, Harvard and the University of Maryland on the study, which was posted April 19.

It does not appear to have received mainstream media coverage or been promoted by NIAID, even though it’s labeled a “US Government work.” Corresponding author Holly Janes of the cancer center, NIAID and Moderna did not respond to Just the News queries.

Moderna's own scientists, in collaboration with the NIAID, demonstrate that the company's mRNA vaccine impedes the immune system's response to Covid infection by significantly reducing the creation of anti-nucleocapsid antibodies. Bombshell.https://t.co/Azk4cksNdr

“Some vaccine platforms give a very high degree of protection, but the durability isn’t very long,” Fauci told CNN last week. He doubts the short-lived immunity is “peculiar to coronavirus” as opposed to an inherent disadvantage in mRNA technology, which Fauci nonetheless called “a really great platform.”

The comments echo Bill Gates’ January criticism of the vaccines for their short-lived immunity and inability to prevent reinfection.

The next month, the COVID vaccine funder — dubbed a “superhero” by the National Institutes of Health — went so far as saying Omicron had “done a better job” of vaccinating the world with broad-spectrum immunity “than we have with vaccines.”

The NIAID study could help explain the frequency of reinfections in America, “sometimes within months” of the previous dose, former New York Times drug research reporter Alex Berenson wrote in his newsletter.

It “essentially demolishes” the theory that because mRNA vaccines “prime people to fight off the Covid infections more quickly” they don’t develop anti-N antibodies, he wrote. The blood measurements show a jabbed person needs nearly 100,000 times as much virus as a placebo to trigger the same chance of developing those antibodies.

While the “long-term immunological and medical significance” of the missing antibodies is up in the air, the nucleocapsid protein “mutates far more slowly” than does the spike protein, which in Omicron is all but unrecognizable to vaccines, Berenson said.

Pfizer CEO Albert Bourla himself said the company’s vaccine had hit a brick wall against Omicron and then seemingly apologized for choosing “counterintuitive” mRNA technology, saying he just followed what underlings recommended.

COVID analyst Igor Chudov noted the researchers called their work an improvement over an Irish study that found “low rates of anti-N seroconversion” among Pfizer-vaccinated hospital healthcare workers, since the American study is a “randomized, placebo-controlled trial with systematic surveillance for infection.”

Law professor Todd Zywicki, who successfully sued George Mason University to recognize his natural immunity as a “medical exemption” to its vaccine mandate, pointed Just the News to his March review of the risks for “original antigenic sin” from repeated doses of the same formulations against evolving variants.

Moderna’s published phase 3 trials suggest that its vaccine gave recipients short-term immunity “at the expense of the long-term ability of the immune system to create a similar degree of robust, broad antibodies” against the 29 proteins in SARS-CoV-2, he wrote.

An October study in Spain compared the response of one- and two-dose recipients to the Wuhan, Alpha, Delta and Kappa variants, finding two doses were only effective against the original strain while the three variants drew a “relative loss of reactivity” from the second dose.

Zywicki also discounted the theory of vaccines clearing infections too fast for antibodies to develop. “In the first Moderna study, the same pattern was found for ASYMPTOMATIC infections — which is a good proxy for the ease of neutralizing the virus,” he wrote in an email.

“It’s an exaggeration” to say the study shows “mRNA vaccines hurt long-term immunity,” as opposed to the problem of using anti-N antibodies as a marker for seroprevalence, Indiana University immunologist Steve Templeton told Just the News.

Templeton is skeptical how useful anti-N antibodies are “for neutralizing the virus, as the spike protein is more prominently displayed.” He has previously questioned how much can be gleaned from waning antibodies.

“People forget that loss of or lack of antibody responses isn’t automatically synonymous with a lost [sic] in strength of protection from severe disease,” Templeton wrote in an email. “T cells are more important in that regard.”