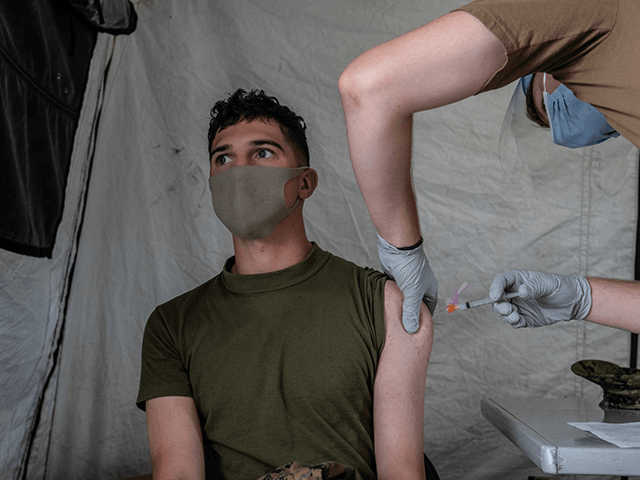 Democrats on the House Rules Committee recently blocked consideration of every Republican amendment to a yearly defense policy bill that would have ended the Biden administration’s military vaccine mandate, despite the impact it could have on military readiness and recruiting.

The vaccine mandate could mean discharge — as the Department of Defense has vowed — for more than 260,000 troops out of a 2.1 million-force who are not fully vaccinated in accordance with Defense Secretary Lloyd Austin’s order, as recently reported by Breitbart News.

Last week, more than a dozen Republicans submitted 16 amendments to the 2023 National Defense Authorization Act (NDAA) that would have ended the mandate for service members and contractors, exposed its effect on the military, or sought to reduce punishments for troops, but Democrats on the House Rules Committee blocked all but one from being considered by the House, ruling them all “out of order.”

The House Rules Committee did not allow consideration of a Rep. Matt Gaetz (R-FL) amendment to express the sense of Congress that members of the Armed Forces should not be discharged for refusing the vaccine for COVID-19, but allowed a Rep. Ted Lieu (D-CA) amendment that expressed the sense of Congress that the Army’s research on working dogs detecting diseases including COVID-19 should continue to receive funding.

The only Republican amendment allowed was from Rep. Pete Stauber (MN) and required the DOD to report every 60 days on religious and medical exemptions for the COVID-19 vaccine requirement requested and denied, the reasons for such denials, the number of members denied an exemption who complied with the requirement, and the number of members denied who did not comply and were separated.

The House Rules Committee is commonly known as “The Speaker’s Committee,” since it is the mechanism the Speaker uses to maintain control of the House floor, according to the committee’s website. There are nine Democrats on the committee, and only four Republicans.

Rep. Thomas Massie (R-KY) blasted the House Rules Committee after it blocked his amendment to defund the mandate.

“Last night the rules committee, controlled by Nancy Pelosi, refused to allow the House of Representatives to vote on my National Defense Authorization Act amendment which would have defunded the military COVID-19 vaccine mandate,” he tweeted.

Last night the rules committee, controlled by Nancy Pelosi, refused to allow the House of Representatives to vote on my National Defense Authorization Act amendment which would have defunded the military COVID-19 vaccine mandate.

The committee similarly blocked an amendment from Rep. Chris Smith (R-NJ) that would protect troops from receiving a less than honorable discharge over the mandate and thus, losing their GI Bill educational and other benefits.

“This is no way to treat our courageous service members who put their lives on the line and sacrifice so much to preserve and defend our freedoms and security,” Smith testified to the committee.

After Democrats blocked Rep. Chip Roy (R-TX)’s amendment to end the mandate, his press office tweeted: “Dems just BLOCKED Rep. Roy’s #HealthCareFreedom amendment to STOP the madness; they won’t even let this get a VOTE.”

We’re in a recruiting crisis and Congress is about to FIRE 60,000 TROOPS with an NDAA that perpetuates Biden’s strategically foolish, un-American vaccine mandate.

Dems just BLOCKED Rep. Roy’s #HealthCareFreedom amendment to STOP the madness; they won’t even let this get a VOTE. https://t.co/sYX0xVRY6c pic.twitter.com/eCIS1VIfbJ

Roy went further, calling on Republicans to reject the National Defense Authorization Act (NDAA) for not doing anything to help service members with objections to taking the vaccine.

He told Breitbart News in a recent interview:

We’re refusing to do it, and I frankly don’t understand it. I’ve had service personnel come to my office emotional about losing either their careers or their loved ones’ careers, parents of their kids, members of the military who have families, who have been in for 15, 17, 19 years, even.

It’s undermining our Defense Department, the ability to recruit and maintain personnel, not to mention their morale at a time when the U.S. Army is at 40% of recruiting levels. … There’s zero basis for it. I mean, even [with the] rampant incompetence among public health officials, they’ve come around to acknowledging that there is a benefit — a better benefit from natural immunity, and that there is no transmission benefits with respect to the vaccine. Yet they’re going to mandate the vaccine for our generally healthiest of healthy — our military personnel in their, you know, twenties and thirties?

We’re not talking about 80-year-olds. We’re talking about generally healthy military personnel between the age of 18 and 40 — some are maybe in their fifties or whatever, but it’s absurd and there’s literally no basis for it. The Republican Party, the Republican conference and the House of Representatives should not vote for National Defense Authorization Act if that doesn’t at least get that fixed.

A recent New York Times article acknowledged that the vaccine mandate was hurting recruiting: “Covid-19 is part of the problem. Lockdowns during the pandemic have limited recruiters’ ability to forge bonds face to face with prospects. And the military’s vaccine mandate has kept some would-be troops away.”

Since the House passed the NDAA last Thursday, Roy and other members of the House Freedom Caucus have demanded that fellow Republicans explain why they voted for the bill.

Rep. Dan Crenshaw (R-TX), who has been under fire from conservatives for his support for the NDAA, claimed it was a “stupid rumor” that he and 148 other Republicans supported kicking out service members over the vaccine mandate.

Andrew Badger, a former Utah congressional candidate, tweeted back to him: “Why didn’t you and the other Republicans who voted for this bill use your leverage to remove the vaccine mandate for service members all together?”

Why didn’t you and the other Republicans who voted for this bill use your leverage to remove the vaccine mandate for service members all together?

Rep. Marjorie Taylor Greene (R-GA) also explained in a tweet thread to Crenshaw on Monday that the NDAA essentially allowed the mandate to continue by not having any provisions in it to prohibit it, and the Senate is unlikely to add any provisions that would change that.

The NDAA is the main vehicle that Congress can use to change policies at the DOD, since it authorizes DOD activities and funding, and Congress can prohibit funding going towards certain activities if it opposes.

The House of Representatives passed the NDAA last week. Next the NDAA will go to the Senate where I am told there will be some changes.

The program allowing the military to force people to be vaxxed & discharged if they refuse will likely remain in the NDAA.

Even if ruled “in order,” the amendments would have gone to the House floor for a vote, where Democrats — who have the majority — would have likely voted them down. Still, lawmakers votes would have had to consider them and go on record opposing or supporting them.