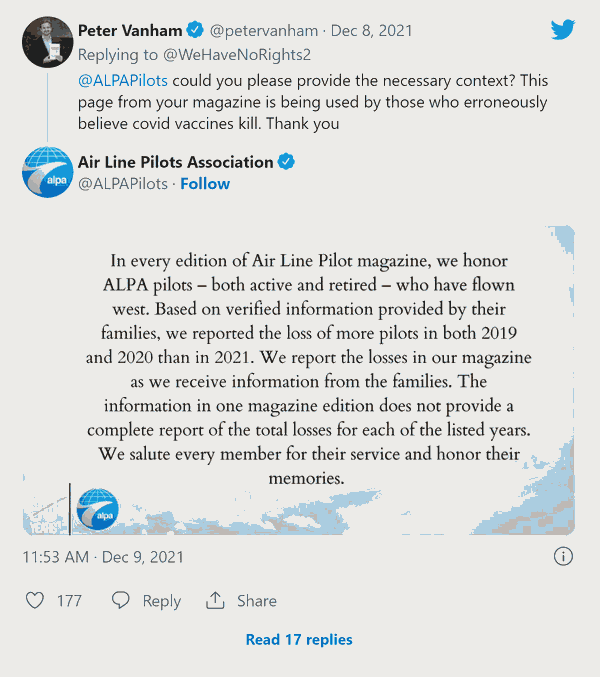 Commercial Airline pilots are a good subset of people to look for a signal that the rollout of the Covid-19 shot may have resulted in people dying younger than they did prior to the unlawful mandate of the shot. These pilots are generally healthier and more physically fit than the average population because they must be so to keep their jobs. They undergo physical examinations by qualified Aviation Medical Examiners every six months. If the pilot is age 35 or older, an EKG must also be performed. They are restricted from being on certain medications.

The ALPA magazine reports pilot deaths every month if the family of the deceased will allow this information to be made public. Therefore, not every pilot death is included. There are several large airlines such as American and Southwest whose pilots do not belong to the Airline Pilots Association labor union as they have their own unions. Several thousand pilot deaths are therefore excluded from this study by default.

When the pilot death is reported by the family and appears in the magazine, it can be several months or years after the death occurred. This can result in very misleading information to spread over the internet. For example, in the Oct-Nov 2021 issue, there was one pilot death reported from 2019, five from 2020, and over 100 from 2021. This looks like pilot deaths escalated in 2021, but that information is false as the way the magazine reports deaths is not cumulative. Actually, there were 457 deaths reported from 2019, 467 from 2020, 457 from 2021 and 114 through the first quarter of 2022. So, in this group of ALPA pilots, there was no signal of increased occurrences of deaths as cumulatively reported in the magazine. However, there is a signal that the ages of these pilots at the time of death is decreasing. There is no way to know for sure if the deaths occurred in pilots who got the Covid-19 injection, but we do know that most of them did due to coercion placed on them by their employers and the federal government.

The method used for this study was to download a pdf file for the entire ALPA magazine, every published issue from January 2019 through May 2022. The pdf pages showing the deaths were extracted into tab delineated text files and transferred into Microsoft Excel for sorting and analysis. Since the magazine only reports the ranks of the pilots, their names, and the airlines the pilots were either working for or retired from at the time of their deaths, there was no way to know the ages of their deaths. Several hours of researching published obituaries from other sources was required. Basic internet searches were performed with the help of intelius.com and newspapers.com to verify the dates of birth and death and confirm the airline. If the information could not be verified, the pilot was excluded from the study.

Also excluded from the study were pilot deaths reported as being retired from legacy carriers like Eastern, TWA and Pan American that had gone out of business long before 2019. All those pilots were already mandatorily retired due to age and the vast majority of them were elderly. Including these pilots would skew the data. Other exclusions were all deaths reported because of accidents, crashes, or shootings.

Here is what I concluded from the study: In 2019 there were 55 published pilot deaths that occurred before the mandatory retirement age of 65. In 2020 there were 52. In 2021 there were 75. In the first quarter of 2022 there were 20. None of these early deaths were from reported accidents, plane crashes or shootings. In many of these obituaries of young pilots, the words “unexpected” or “sudden” were prevalent. Based on this raw data, the incidence of pilots dying before retirement age has increased by about 40% beginning in January of 2021. This is consistent with recent actuarial analyses from insurance companies showing a 40% increase in deaths of people who were still working when they died.

In part two, I will present several physiological reasons why the Covid-19 shot could be causing these early deaths.

In part one it was shown that beginning in the year 2021, there was a 40% increase in the incidences of pilot deaths before normal retirement age. This was evident in a subset of commercial airline pilots that belonged to the Airline Pilots Association as reported in the ALPA magazine. There was a significant change in the physiology of most pilots beginning in 2021, and that was the requirement for them to get a Covid-19 injection to keep their jobs. This report will discuss how the Covid-19 shot changes physiology and perhaps result in early mortality.

The first thing to consider is the physical characteristics of the injection. In the Pfizer and Moderna products, it is lipid nanoparticles (tiny fat bubbles) in a suspension that is usually mixed prior to injection, with strict time and temperature limits. Lipid nanoparticles by nature will tend to stick together or coagulate. To prevent this from happening, PEG or polyethylene glycol is attached to the lipid nanoparticles to keep them separated. The person who prepares the injection is instructed three times to look at the suspension before they inject it to make sure that is not coagulating in the vial or syringe before pushing the plunger. Unfortunately, some recipients were injected with coagulating goo by poorly trained technicians. If the tip of the needle is in capillary network or vein, this coagulation can rapidly form a dangerous circulating clot or embolism. This can result in a deadly stroke or heart attack in a short amount of time.

The next thing to consider is what the shots are creating inside of the body. In traditional shots called vaccines, there is either part of the virus or a weakened version of the virus in the shot, along with an adjuvant to stimulate the immune system to create an antibody against the proteins in the virus. It is important to know that the antibodies created from these shots called vaccines can only REACT to infections, never ever prevent them. The Covid-19 shot does not contain any parts of any viruses. It contains modified messenger RNA (mRNA), which is the genetic message to make a protein. The protein it makes is something similar to the spike protein that was identified on the original Wuhan Sars-CoV-2 virus. The idea is to create antibodies that will react to the spike protein, which it does do for sure. Again, the antibodies can only react to the spike protein once it enters the body on a virus, never ever prevent the virus from entering.

In addition to stimulating antibody production, the spike proteins are designed to attach to ACE2 receptors on cells in your body and block these receptors. There are many ACE2 receptors that line the endothelium of your blood vessels. The letters of ACE mean Angiotensin Converting Enzyme, which are used to control blood pressure. When the receptors are taken up by spike proteins, blood pressure can skyrocket in some individuals, and this can be deadly. Worse, they disrupt the smooth lining of blood vessels, resulting in micro clotting. Spike proteins can also attach to sialic acid residues on red blood cells, causing them to coagulate. Depending on the location of the coagulation, it can also be deadly. Spike proteins can also attach to blood platelets, which are responsible for normal blood clotting when it is necessary. Causing too many blood platelets to coagulate in locations where it is not necessary can result in thrombocytopenia (not enough platelets). This can also be deadly if bleeding occurs in the brain that cannot be stopped. In fact, there is now something called Covid-19 Vaccine Induced Thrombotic Thrombocytopenia. https://www.ncbi.nlm.nih.gov/pmc/articles/PMC8400504/

Another thing to consider is the fact that the incidence of myocarditis escalates after the second shot or booster shot. The CDC admits this. https://www.cdc.gov/coronavirus/2019-ncov/vaccines/safety/myocarditis.html

All the above changes in physiology can result in sudden and unexpected death. Many of the obituaries used the words sudden and unexpected. Some of the obituaries attributed the deaths to various types of cancers. We now know that the expression of cancer cells in people who get this shot and already have cancer will escalate. This happens because the shot will decrease the numbers of natural killer cells and T-cells and their ability to communicate by interferon signaling. https://www.nature.com/articles/s41421-021-00329-3. One of the many functions of these cells is to recognize and destroy cancer cells in the body, so reducing their numbers is not good if a person already has cancer. But it’s worse because the way these cells recognize cancer cells is by using toll like receptors, and these receptors have also been shown to be depleted in people who get this shot. https://www.news-medical.net/news/20210510/Research-suggests-Pfizer-BioNTech-COVID-19-vaccine-reprograms-innate-immune-responses.aspx


In part three I will discuss what the FAA needs to do right now to preserve safety of flight and prevent a possible disaster.

Of course the true believers try to dismiss the higher death rate.