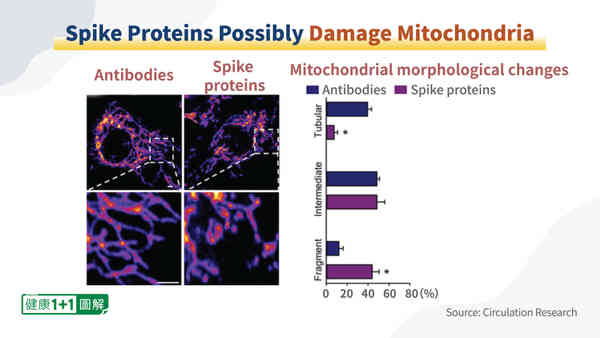 Share to the world...
Source Link: https://www.theepochtimes.com/how-to-remove-harmful-spike-protein-from-your-body_4454443.html?utm_source=partner&utm_campaign=TheLibertyDaily
The signature protein of COVID-19 and the vaccine can undermine cell function with long-lasting effects
BY HEALTH 1+1 AND XIAOXU SEAN LIN TIMEMAY 9, 2022

Since the COVID-19 pandemic swept across the world more than two years ago, more than 4.5 billion people worldwide have become fully vaccinated against it. Now more and more people are concerned that the spike proteins used in the vaccines and present in the virus are the cause of long COVID syndrome.

The spike protein, also known as the S protein, is the largest structural protein in the SARS-CoV-2 virus, which causes COVID-19. It’s a signature structure that protrudes from the surface of the virus, creating the crown-like shape that coronaviruses get their name from. Corona is Latin for “crown” or “wreath.”

When the pandemic first started to spread, people’s understanding of the spike protein was very limited. It was thought that the spike protein only played the role of invading our cells by binding to the ACE (angiotensin-converting enzyme) receptors on our cell walls. However, scientists have slowly discovered that the effects of this protein are multifaceted, and it interacts with other cellular tissues besides the ACE2 receptors.

During more than two years of the COVID-19 pandemic, many studies have analyzed the effects of the spike protein from different aspects and have discovered that it’s harmful to the human body in several ways, including:

We’ll go into the details of each of these points.

When the virus enters the human body, the spike proteins will affect multiple organs in different ways. Studies have shown that many organ cells can be affected by spike proteins, such as those in the heart, brain, and cardiovascular system. In addition, a paper published in 2021 in the bioRxiv preprint repository states that S proteins cause:

In addition, spike proteins can cause different degrees of oxidation of the organs, leading to more cells suffering premature death and putting the body in a hyperoxidized state, which may further increase the risk of cancer.

A new study published in the Journal of the American Heart Association found that spike proteins also have a direct effect on lung function.

When spike proteins are present in the human body, the pulmonary alveolar cell walls in the lungs will begin to thicken and solidify, and lung functions will decline. The pulmonary alveoli are the tiny, balloon-shaped air sacs that expand and shrink in our lungs as we breathe.

The spike proteins will also affect the function of cellular mitochondria in the lungs. Mitochondria are the power plants of our cells and hence the body’s energy base.

When the spike proteins stimulate our pulmonary alveolar cells or endothelial cells (which line our blood vessels and lymphatic vessels), the mitochondrial structure will change dramatically and become heavily fragmented, and the number of tubular mitochondria will be greatly reduced. As the cells in the alveoli or endothelial tissues become damaged, they no longer produce energy efficiently, which is likely to cause the cells to enter a state of premature decline and death. Scientists have hypothesized that long COVID may be caused by this damage to the mitochondria. One of the major symptoms of this chronic form of COVID-19 is fatigue. This may be because of the fact that the cellular mitochondria are damaged or dying, resulting in a lack of energy at the most essential level of our body.

Mitochondrial damage in different cells can also bring about different symptoms. If the mitochondrial function of lung cells are damaged, then the pulmonary alveoli’s ability to expand and contract will be weakened, oxygen absorption will be poor, and the body’s metabolic level will also be reduced. This also makes one more prone to fatigue.

Damage to the Cardiovascular System and Blood Clots

A study published in Clinical Science discovered that when the SARS-CoV-2 virus enters the body, spike proteins will bind to the CD147 receptors on the surface of the pericardial cells, making them more likely to shed from the surface of the endothelial cells. This will affect some of the functions of the endothelial cells and accelerate the death of the vascular wall cells. In addition, spike proteins themselves can directly stimulate pericardial cells to produce more pro-inflammatory factors that can damage the myocardium and cause blood clots. Spike proteins can also induce thrombosis, which is when blood clots block veins. Another experiment published in the BioRxiv preprint repository investigated how platelets would change after being stimulated by spike proteins. The experiment compared the SARS-CoV-2 virus spike protein with another viral protein called VSV (Vesicular stomatitis virus) and found that more platelets were induced to clot in the presence of the spike proteins.

For instance, there are 11 types of toll-like receptors in the innate immune system, and the seventh type of these toll-like receptors can recognize the RNA of single-stranded viruses. The mRNA (messenger RNA) that enters the body after COVID-19 infection or vaccination is also single-stranded, and immune cells will recognize the virus’s RNA and attack it. In the presence of spike proteins, the toll-like receptor expression quantity may increase in response to the viral attack and complementary immune cells may release more interferons in response to different viral variants. If the amount of viral spike proteins in the body is too high, they may over-activate the expression of interferons, which may even induce the body’s immune systems to attack its own cells.

Do Vaccine Spike Proteins Stay in the Body?

As we know, the COVID-19 vaccines have incorporated an expression mechanism for the viral spike proteins that triggers our immune systems to respond to the virus. But the question remains: How long do the spike proteins from the vaccines remain in the body?

The spike proteins are divided into two parts: S1 and S2, with S1 remaining in the blood and S2 bound to the cell membranes. The finding that intact spike proteins were still present in people two weeks after vaccination was beyond expectations.

Another study published in the Journal of Immunology found that S2 proteins could still be detected four months after the second dose of the Pfizer vaccine. However, the harm of spike proteins is related to their amount. The aforementioned side effects are all based on in vitro studies and animal models, and the relatively serious damage occurred only when the amount of spike proteins was large.

If the viral mRNA in the vaccine only appears in small amounts in the muscles and doesn’t enter the blood or organs in large amounts, then these serious side effects won’t occur. That means clearing out these spike proteins can limit their potential negative effects on the body.

How to Get Spike Proteins Out of the Body

If someone develops Long COVID-19 syndrome after infection or vaccination, they may wonder what medicines can be used to expel the spike proteins and relieve their symptoms. The World Council for Health (WCH) has made several recommendations for nutrients and medications.

1. Nutrients that may help improve symptoms include:

These are all nutrients helpful in boosting the immune system, thereby helping the body remove spike proteins. Some plant extracts in nature can also help detoxify the body, including: Some of these ingredients, such as the shikimic acid contained in pine needles, have antioxidant properties that can reduce oxidized free radicals in the body and provide a detoxifying effect.

The above-suggested medicines aren’t cures, but they can help boost the body’s immunity and balance the body’s immune mechanism, which is helpful in the overall fight against the virus.

It’s important to emphasize that everyone’s situation is different. So talk to your physician before taking the medications recommended by the WCH to make sure they’re suitable.

World Council for Health: A practical approach to keeping healthy after your Covid-19 jab