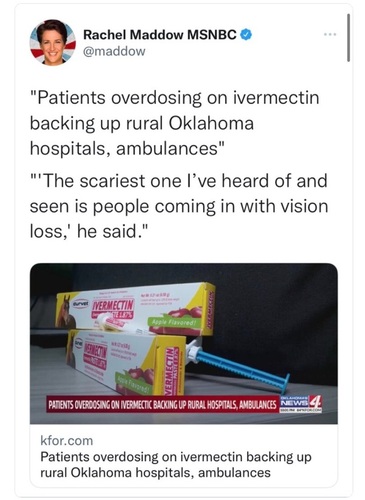 Share to the world...
Source Link: https://www.lifesitenews.com/opinion/where-are-the-apologies-for-spreading-harmful-misinformation-about-fake-ivermectin-overdoses-in-oklahoma-hospital/
Excerpt:
The headlines and mainstream media reports about overdoses of ivermectin leading to hospital queues, were found to be false, but Twitter took no action against those on the platform promoting the story.

(American Thinker) – Rachel Maddow still has her blue checkmark on Twitter.  The ultra-rich news commentator (reportedly earning $30 million a year in her new MSNBC contract) gleefully spread a false story that rural hospitals and ambulances in Oklahoma were backed up because so many ignorant rubes were overdosing on ivermectin horse medicine.  Some were even losing their vision.

It is all part of a campaign to demonize ivermectin, and totally false. The original story appearing in Rolling Stone was as fake as that magazine’s University of Virginia rape hoax.

So where’s the accountability? There is no tag from Twitter calling this misinformation. No sign on Maddow’s Twitter feed that she takes responsibility for spreading a false story that could lead to people not taking an effective medicine. Why, people could miss a life-saving treatment. This is the sort of thing where the left cries, “Blood on your hands!” when there is an opportunity to criticize a conservative.

Disclaimer: I am not a physician and do not offer any medical advice. Always consult your doctor before taking any medication.

And the fact is that, despite the AMA calling for an end to use of ivermectin for COVID — because people self-administering the drug have overdosed (as happens with aspirin all too frequently in suicide attempts) — it has been endorsed by medical authorities overseas and can demonstrate remarkable effectiveness.

Drew Holden has collected a number of media figures and outlets that uncritically spread harmful misinformation. Note that all the examples below (and there are more) sport blue checkmarks, Twitter’s guarantee. One of them may be exposed to libel.