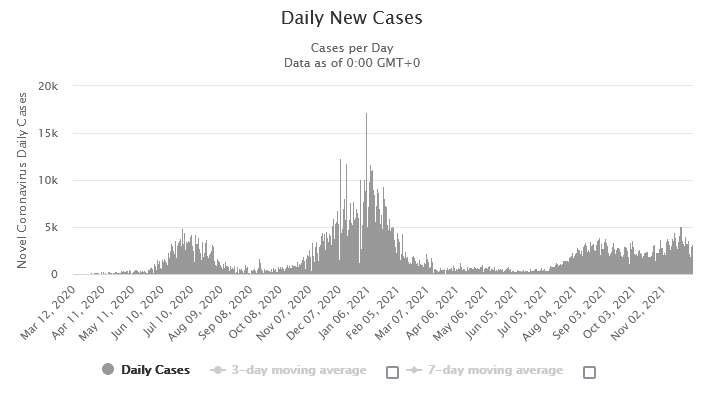 This is what Vaccine-Enhanced Infection looks like from a statistical perspective. The chart below is Daily New Cases of Covid-19 in Arizona. Notice the failure to conform with the usual shape of a bell curve in the third wave starting on July 5, 2021. The most plausible explanation is that the Covid vaccines are not only interfering with the natural immunity acquired by people who have previously been infected, but are enhancing the potential for infection among the previously vaccinated, thereby preventing the number of daily new case from declining in the customary manner.

Meanwhile, Germany demonstrates that it has learned nothing from the disaster that happened the last time it followed an Austrian’s lead:

Germany will lock down its unvaccinated citizens while parliament debates making jabs mandatory, Angela Merkel said as she threw her weight behind the move today.

The outgoing Chancellor said that un-jabbed people will soon be barred from non-essential shops and all cultural and leisure facilities, with only those who have got their shots or been infected with Covid allowed to enter.

The Bundestag will also begin debating a vaccine mandate as soon as possible with a view to making it law by February next year, Merkel added.

Speaking alongside incoming Chancellor Olaf Scholz who has also signalled his support for the move, she said: ‘If I were in the Bundestag, I would vote for it.

Other lockdown measures include limiting both public and private gatherings attended by the unvaccinated to a maximum of four people from two households.

Nightclubs will also be close in high-infection areas, schoolchildren will be forced to wear masks, and outdoor sporting events will be limited to a maximum of 50 per cent capacity.

The sale of fireworks for New Year’s Eve will be banned with the intention of discouraging crowds to gather, Merkel added.

It was not immediately clear when the measures will take place, though Merkel referred to an ‘Advent Lockdown’ during her press conference – suggesting they will initially run up to Christmas.