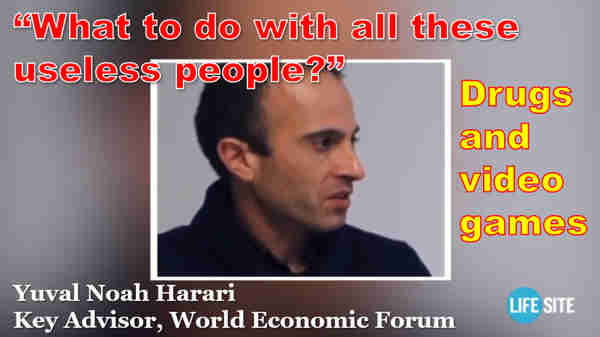 On today’s episode of The John-Henry Westen Show, I explain what Yuval Noah Harari of the World Economic Forum means when he calls some human beings ‘useless.’ You’ve seen many popular personalities just guffaw over the guy like he’s the greatest thing since sliced bread, the most brilliant person on the planet, etc.

Well, you know what? I’ll get into that in this show. This is The John-Henry Westen Show. You’re going to want to stay tuned.

Listen to the rest of today’s episode below, or click here.

The John-Henry Westen Show is available by video on the show’s YouTube channel and right here on my LifeSite blog.

It is also available in audio format on platforms such as Spotify, Soundcloud, and Acast. We are awaiting approval for iTunes and Google Play as well. To subscribe to the audio version on various channels, visit the Acast webpage here.

You can send me feedback, or ideas for show topics by emailing jhwestenshow@lifesitenews.com.

John-Henry is the co-founder and editor-in-chief of LifeSiteNews.com. He and his wife Dianne and their eight children live in the Ottawa Valley in Ontario, Canada.

He has spoken at conferences and retreats, and appeared on radio and television throughout North America, Europe and Asia. John-Henry founded the Rome Life Forum an annual strategy meeting for pro-life leaders worldwide. He co-founded Voice of the Family and serves on the executive of the Canadian National March for Life Committee, and the annual National Pro-Life Youth Conference.

He is a consultant to Canada’s largest pro-life organization Campaign Life Coalition, and serves on the executive of the Ontario branch of the organization.  He has run three times for political office in the province of Ontario representing the Family Coalition Party.

John-Henry earned an MA from the University of Toronto in School and Child Clinical Psychology and an Honours BA from York University in Psychology.