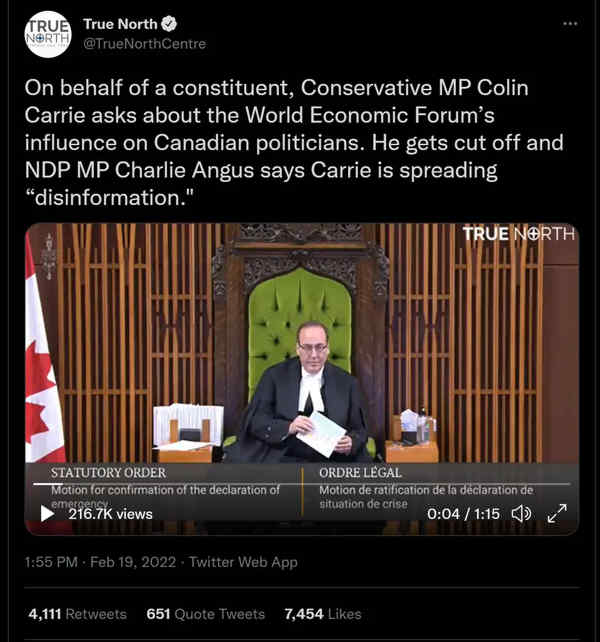 A Canadian MP was shut down in Parliament Saturday after bringing up the World Economic Forum’s (WEF) influence over Prime Minister Justin Trudeau’s cabinet.

Conservative MP Colin Carrie pointed out how WEF founder Klaus Schwab once bragged that his Young Global Leaders group had “penetrated” Trudeau’s government before he was abruptly cut off by the speaker of the House of Commons.

“I had a constituent who wanted me to ask a qustion about outside interference to our democracy. Klaus Schwab is the head of the World economic Forum and he bragged how his subservice WEF has ‘infiltrated governments around the world’, he said that his organization had penetrated more than half of Canada’s cabinet,” Carrie stated.

On behalf of a constituent, Conservative MP Colin Carrie asks about the World Economic Forum’s influence on Canadian politicians. He gets cut off and NDP MP Charlie Angus says Carrie is spreading “disinformation.” pic.twitter.com/LKWMPDyLFW “In the interest of transparency, could the member please name which Cabinet ministers are on board with the WEF’s agenda? My concern is -” Carrie continued before the Speaker abruptly cut him off, calling the “audio” of his remarks “really, really bad.”

At that point, New Democratic Party (NDP) MP Charlie Angus accused Carrie of spreading “disinformation” for simply asking about this disturbing relationship between Trudeau and the WEF.

The fact is, Carrie’s remarks are 100% accurate.

Trudeau himself has met with the WEF founder numerous times over the years as Prime Minister, with Schwab even once bragging that Trudeau was more loyal to the WEF than to Canada.

Klaus Schwab on Trudeau’s loyalty to the World Economic Forum & not to the Canadian people. pic.twitter.com/8VaTKMAnb6

Additionally, several members of Trudeau’s Cabinet are openly associated with the WEF, such as Finance Minister Chrystia Freeland, who serves as a governing member of the globalist body’s board. Rather than openly discuss the clear conflicts of interest related to Trudeau’s relationship with the World Economic Forum, the liberal wing of Parliament instead resorted to their typical authoritarian method of censorship and gaslighting.

Remember, the WEF is the organization that claimed “you will own nothing, and you’ll be happy” as part of its Great Reset “Fourth Industrial Revolution” initiative.