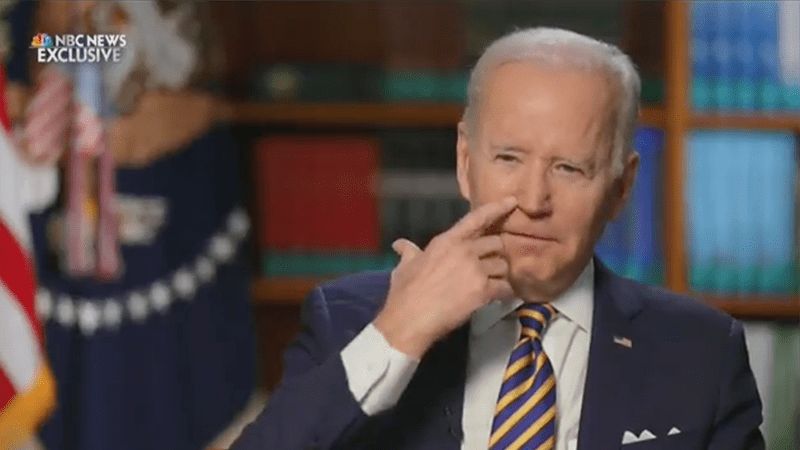 “Think of the children.”

Joe Biden managed to cobble together a sentence during an interview with NBC’s Lester Holt over the weekend, declaring that his message to people who want COVID to be over is that their personal freedoms come second to his mandates.

“What’s your message to people who want desperately for [Covid] to be over and to be able to resume the lives they remember?” Holt asked Biden.

“If your exercising personal freedom puts someone else in jeopardy, their health in jeopardy, I don’t consider that freedom,” Biden sarcastically stated in response, before telling people who don’t want to continue wearing masks or getting jabs to “think of the children.”

As we fight COVID-19, we should all be working to keep our communities safe.

“If your exercising personal freedom puts someone else in jeopardy, their health in jeopardy, I don’t consider that freedom.” –@POTUS pic.twitter.com/aO8UdEEJl4

Someone should get the memo to Biden that it’s election season, and his unscientific mandates are not conducive to winning votes.

A CNN poll revealed Sunday that a majority of Democrats now don’t even want Biden as the nominee in 2024.

The survey noted that just 45 percent of Democrats and Democrat-leaning voters want Biden to run for reelection, with 51 percent saying they believe someone else should be the nominee.

In addition, the survey found that “While 70 percent of Democratic voters who strongly approve of the way he’s handling the job said they’d like to see him renominated, that drops to just 35 percent among Democrats who said they approve moderately.”