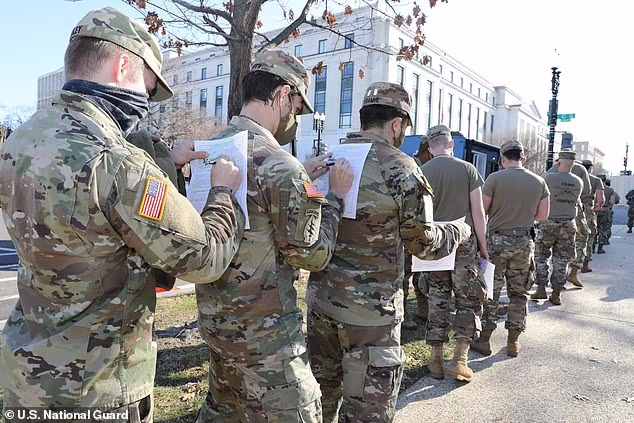 By JANON FISHER FOR DAILYMAIL.COM

More than 60,000 unvaccinated Army National Guard and Army Reserve soldiers will be barred from performing their military duties and have their pay and benefits cut because they refuse to get their shots, officials announced on Friday.

‘Soldiers who refuse the vaccination order without an approved or pending exemption request are subject to adverse administrative actions, including flags, bars to service, and official reprimands,’ according to a statement from the Army.

There are about 40,000 National Guard soldiers and 22,000 Reserve soldiers how have not been vaccinated. The announcement comes as many of the so-called ‘weekend warriors’ would be taking time off to perform their compulsory two-week training drills for their units.

The military branch has raised the stakes for anti-vaxxer soldiers and promised to go one further and discharge their personnel if they continue to resist immunization.

‘In the future, soldiers who continue to refuse the vaccination order without an exemption may be subject to additional adverse administrative action, including separation,’ an Army representative said.

Across the military, the Army, Navy, Air Force and Marine Corps have discharged as many as 4,000 active duty service members for refusing the vaccine