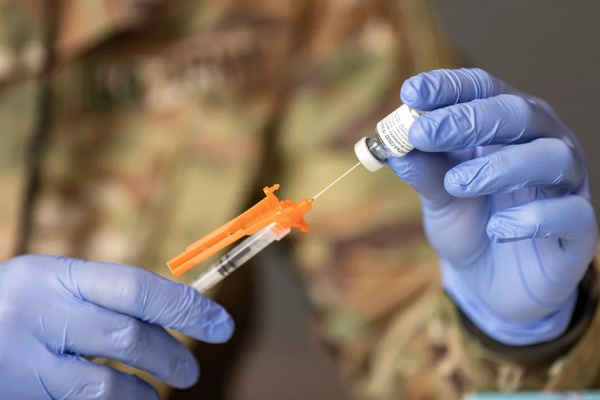 The U.S. Army announced on Friday that all members of the Army National Guard and U.S. Army Reserve who are not vaccinated against COVID-19 will be barred from federally funded drills and training, and subsequently won’t be paid or receive retirement credit.

A press release from U.S. Army Public Affairs stated that soldiers who refuse the “lawful DOD COVID-19 vaccination order” are subject to “adverse administrative actions, including flags, bars to service, and official reprimands.”

The Army warned that moving forward, soldiers who continue to refuse the COVID-19 vaccine without an exemption could be separated from the service.

“Unit commanders will be able to activate and pay Soldiers for limited administrative purposes, such as receiving the vaccine, processing their exemption requests, or conducting separation procedures,” the press release stated. “Soldiers will be paid and/or receive retirement credit for these service days.”

The Army said that it has given every soldier the chance to request an exemption, including those stemming from medical or religious concerns.

“Officials review each request on an individual basis, including review by appropriate medical personnel or chaplains, public health and legal review, and recommendations from the Soldier’s commanders,” the service added.

According to The Associated Press, 14,000 Army Guard troops that have flatly refused the vaccines, and another 7,000 troops are still awaiting a final decision on their requests for a religious exemption to the vaccine mandate.

Earlier this week, Rep. Thomas Massie (R-KY), who has been a vocal critic of the military-wide vaccine mandate, criticized the news that the Army Guard may ultimately go through with separating thousands of its troops.

“It’s a political purge, plain and simple,” Massie tweeted. “At this point, there’s no scientific reason for mandating a vaccine based on COVID strains that are now three years old. Nearly everyone has natural antibodies to newer strains due to exposure.”

At this point, there’s no scientific reason for mandating a vaccine based on COVID strains that are now three years old.

Nearly everyone has natural antibodies to newer strains due to exposure. https://t.co/QdVt5ezhQ5