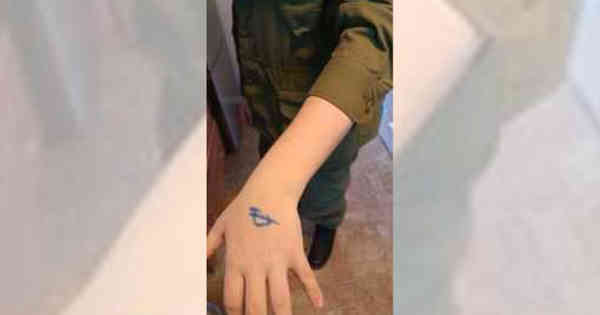 The Cadet and Junior Canadian Rangers has apologized after unvaccinated cadets were marked with pens and segregated at the London International Airport on May 7 before being denied the opportunity to participate in a training exercise on two different C-130 Hercules planes.

Last Saturday, squadrons from across Ontario were bussed into London, Ont. to fly on two C-130 Hercules planes provided by the 436 Transport Squadron from Trenton.

True North spoke with a concerned parent who said her 15-year-old son was devastated by the incident. The mother wished to remain anonymous but provided photographs of her son’s hand marked with a crossed out zero.

“His superiors, his captains all were not aware. Everybody thought that they were able to attend, including prior to leaving Saturday morning,” she said. “They got on a bus early Saturday morning. From where I live, it’s well over two hours to get to London, so they all traveled together.”

“What he said was that when they came – I don’t know at what point – but the bus stopped, and this army person came on the bus, and he asked whoever was vaccinated had to put their hands up. And then he asked who was not vaccinated in front of everybody to put up their hands.”

“At some point, he got a zero marked on his hand,” she said. “So did every child that wasn’t vaccinated.”

Commander of Cadets and Junior Canadian Rangers, Brigadier-General Jamie Speiser-Blanchet confirmed with True North that the cadets were marked on the hand and apologized for the way the situation was handled.

“Unfortunately, this information was not effectively communicated to cadets and parents at some squadrons. This resulted in approximately 30 cadets arriving at the aerodrome and being unable to enter the flight area and fly on the aircraft with their peers,” said Speiser-Blanchet. “To identify those cadets who could fly, Cadets and Junior Canadian Ranger staff asked for a public show of hands and marked each cadet’s hand in accordance with their status – black for able to fly and blue for able to attend the expo only.”

According to Speiser-Blanchet, the CAF is reviewing its procedures to ensure that it doesn’t happen again. While unvaccinated cadets couldn’t fly on the aircraft they were able to attend an Aviation Expo and were supervised at all times.

“We apologize that this was not communicated in advance and for the disappointment this caused. We also apologize for how vaccination status was inadvertently identified within a group setting as staff determined who was permitted to fly. We are taking immediate action to ensure this oversight does not happen again,” Speiser-Blanchet told True North.

According to Speiser-Blanchet, the decision was taken in order to comply with federal flight regulations.

The mother said she has not been able to identify who the individual was who marked her son’s and other children’s hands.

“I’m not sure if there was a decision last minute that they weren’t allowed to go or that this was such a huge miscommunication in that case,” she said. “They all expressed being very disappointed, devastated. They felt left out, rejected. I don’t know if my son named them that or if one of the other boys did, but they named themselves the ‘reject club’.”

Although media reports covered the familiarization flight, no legacy media outlet mentioned how the unvaccinated teens were treated.

According to the cadet program’s Summer 2022 Vaccine Policy, overnight training exercises require all participants to be fully vaccinated to participate.

“Cadets will show proof of COVID-19 vaccination at the time of applying for the applicable activity,” the policy reads. “Corps and squadron staff will record in Fortress that proof has been shown. Cadets must be prepared to show their proof of vaccination when they arrive at the start of the activity.”

For other in-person activities including day trips, vaccination is not mandatory. As for the cadets boarding training flights, the Trudeau government mandated on Nov. 30 that all travellers boarding domestic or international flights are required to be fully vaccinated.

The cadet’s mother said the whole situation was not only insensitive but immoral.

“(His captain) was unaware of it in the morning so she was upset, but to me I will say that there were many adults there that day and I feel like there was so many things that were extremely wrong to do to a person, especially a youth, that it’s hard to take that in that nobody said ‘wait a minute’ at any point,” she told True North.

“I don’t understand how this could happen and I really don’t want this to ever happen to another child in the cadet program or any other type of situation. If we did this based on other things. I don’t know why this is acceptable to ask somebody their medical status in front of their peers to humiliate them and then mark them. To tell them you have to go over here because you didn’t answer this question according to what we’ve decided now is the rule.”

“He was really devastated, and he still is about it. He wants to quit in one sense, but in the other sense my husband’s father was a pilot, so this was his inspiration to join and get connected to him. He looks up to him so much.”