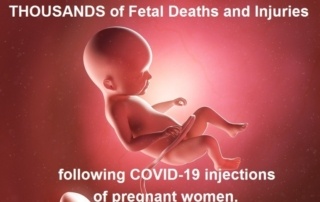 There have now been 1,614 recorded fetal deaths following COVID-19 injections of pregnant women in VAERS (Vaccine Adverse Event Reporting System) as of 9/10/2021. (Source.)

Everyone acknowledges and agrees that VAERS is vastly under-reported, but now we have an expert analysis on just how under-reported adverse events are from Dr. Jessica Rose. Her conservative estimate based on a careful analysis of the data is that the events recorded in VAERS need to be multiplied by X41.

That would mean that a conservative estimate of the true numbers of fetal deaths would be 66,174 when their mothers are injected with a COVID-19 shot.

Besides the fetal deaths, we also know there are 96 recorded cases where a breastfed child was injured after the nursing mother took a COVID-19 shot. (Source.)

Again, if we multiply that number by X41, a conservative estimate would be about 3,936 adverse events in infants being breastfed when their mothers are injected.

Two of those resulted in the breastfed infant dying after the nursing mother was injected.

VAERS report ID 1532154 was apparently filed by the mother, a 36-year-old woman from New Mexico:

I had been breastfeeding my 6 week old baby at the time that I received the first Pfizer vaccine on June 4, 2021.

He became very sick with a high fever about 2 weeks after I got the first Pfizer vaccine on June 21. He was treated for 2 weeks with IV antibiotics for a supposed bacterial infection.

However, they never found any specific bacteria, and called his diagnosis culture-negative sepsis. At the end of his hospital stay he tested positive for rhinovirus.

After the 14 day course of antibiotics, he was home for one week, but exhibited strange symptoms (e.g. swollen eyelid, strange rashes, vomiting).

I took him back to the hospital on July 15, where he presented with what they called an atypical Kawasaki disease.

He passed away shortly thereafter from clots in his severely inflamed arteries.

I am curious if the spike protein could have gone through the breast milk and caused an inflammatory response in my child.

They say Kawasaki disease presents very similarly to the Multi-System Inflammatory Syndrome in children that they are seeing in post Covid infections. (My baby also had unusual birth circumstances, as he was born at 37 weeks, triggered by a maternal appendicitis.)

Patient received second dose of Pfizer vaccine on March 17, 2020 while at work. March 18, 2020 her 5 month old breastfed infant developed a rash and within 24 hours was inconsolable, refusing to eat, and developed a fever.

Patient brought baby to local ER where assessments were performed, blood analysis revealed elevated liver enzymes. Infant was hospitalized but continued to decline and passed away.

Diagnosis of TTP. No known allergies. No new exposures aside from the mother”s vaccination the previous day. (Source.)

Last week someone from the UK uploaded a video of a newborn allegedly suffering from the effects of a COVID-19 shot the mother was forced to take against her will as a condition for having the baby in the hospital.

“My niece had her second child last month and throughout her pregnancy she resisted being vaccinated. A month before the baby was born she was told that she would need a cesarean section and the hospital and doctors insisted that they would not allow her into the hospital unless she had the jab.

With such pressure, and the worry of her baby’s health, she felt forced to comply and take the COVID shot. Now the baby is in hospital, has uncontrollable intermittent ‘jitters’ that are worsening and needs a brain scan as they cannot fathom what is causing this 😢

Every test that has been done has come back negative so they are being transferred to the Great Ormond Street hospital to do further investigations.”