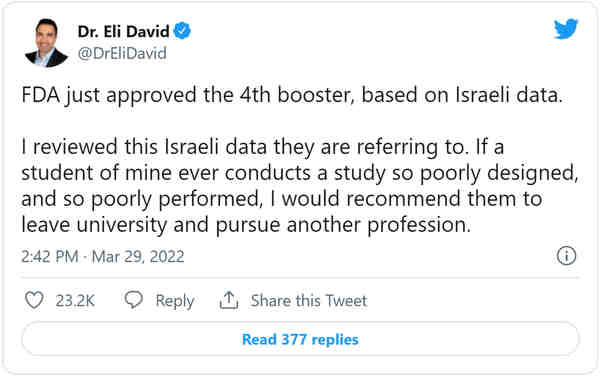 The Food and Drug Administration (FDA) bypassed many of its own protocols to speed through the authorization of Pfizer’s second booster dose of the COVID-19 vaccine last week.

Multiple medical experts, including some who sit on the FDA’s top vaccine advisory committee, said they had no idea why the agency skipped over its normal approval process to authorize the fourth vaccine dose for Americans aged 50 and older. The authorization was even broader than the drug company requested, which was that it be greenlit for those aged 65 and older.

That FDA vaccine panel, the Vaccines and Related Biological Products Advisory Committee (VRBPAC), is meeting Wednesday, and part of the agenda will be to discuss the fourth vaccine dose and the Israeli studies which are being used to exhibit its effectiveness. Typically, the vaccine authorization process would involve a meeting and vote by VRBPAC on whether to recommend authorization, followed by the FDA head granting that authorization. Then, the Centers for Disease Control and Prevention’s (CDC) vaccine committee would vote on how to recommend the vaccine, which would then be determined by the CDC director.

Dr. Paul Offit, a co-inventor of the rotavirus vaccine and member of VRBPAC, said he couldn’t explain why the FDA didn’t present its data to the committee first before moving ahead with authorization: “The way it’s working here is that the government basically just declares that this is what they’re going to do.” In an interview with the Daily Caller, Offit expressed concern that the data used to authorize the second booster could be flawed. The Israeli studies examine the outcomes of individuals who got a 4th shot versus those who declined one. Offit explained that this is lacking compared to a randomized, controlled clinical trial.

“I haven’t seen that data, they haven’t brought it to the committee… but this decision has been made, and certainly will not be reversed,” he told the Daily Caller. “You’d have to ask the FDA why they decided to go ahead and make this particular decision… because again, I have not seen the data.”

Like Offit, Meissner shared some skepticism about the Israeli data and the overall lack of studies about the fourth dose. “What all of the facts were, that were presented to the FDA, all the data, I don’t know. From what’s been available in the press that everyone has had a chance to see, the numbers are pretty small,” he said. Some experts who spoke with the Daily Caller said that even though the authorization for the fourth shot was rushed and abnormal, it was still a reasonable decision to go ahead with greenlighting it. That isn’t a universal opinion. In a Wall Street Journal op-ed, Drs. Philip Krause and Luciana Borio lay out a case for why most Americans don’t need a fourth shot.

Krause and Borio would be authorities on the subject. The former was the deputy director of vaccines research and review at the FDA before resigning last year amid political pressure from the Biden administration after more than a decade at the agency. The latter was formerly the acting chief scientist at the FDA.

Dr. Monica Gandhi, an infectious disease expert at the University of California San Francisco who does not sit on the FDA vaccine committee, said it was rare for the FDA to ram through an authorization in this way: “I am concerned about the FDA making decisions on booster shots without input from the Vaccines and Related Biological Products Advisory Committee. This is rare for the FDA not to consult with advisory committees before making approvals that affect millions of Americans, especially without a randomized trial or better data on the need for younger populations like 50 and over.”

It’s also incredibly rare for the agency to grant an applicant a broader authorization than it asked for, such as authorizing Pfizer’s fourth dose for Americans aged 50 and older when the pharmaceutical giant only asked for approval for ages 65 and older. Offit said the decision to do so “completely shocked” him.

There’s always a possibility to have too much of a good thing. The rush to get fourth doses could have downsides, experts told the Daily Caller. Both Offit and Gandhi independently raised the issue of original antigenic sin —  a phenomenon in which the immune system continually produces an immune response targeted at the first encounter with a pathogen, rather than updated strains or variants. It’s possible that this process could render variant-specific vaccine doses or boosters ineffective, because the body bases its immune response on the original vaccine dose.

Offit added that there are other possible drawbacks, from run-of-the-mill side effects from the shots like fatigue and pain to immune system exhaustion. There are diminishing returns to each booster dose, he explained. “The other thing that it’s created here, which I think is concerning, is the notion that there’s just no downside to this, that you can just get booster after booster after booster and there’s no downside – and I don’t think that’s true.”

Gandhi echoed that sentiment, saying simply pumping in booster after booster may be a result of a failure to understand how the immune system actually deals with the coronavirus: “Without a knowledge of the immune system, this discussion of antibodies alone will lead us to want to boost every 4 months, which is not logistically feasible and is unprecedented.” (RELATED: Man Investigated After Allegedly Getting 90 COVID-19 Vaccine Shots To Sell Vaccination Cards In Germany)

For his two cents, Meissner said it wasn’t entirely clear that there was even widespread need for further boosting, even if the fourth dose is safe and effective: “We aren’t seeing a lot of breakthrough disease in people who are appropriately immunized, so I’m not quite sure what motivated the FDA… why at this time?”

Ultimately, all of these concerns, tradeoffs and questions of necessity are the kinds of topics which would be debated at the VRBPAC meeting that would precede authorization. That didn’t happen, and nobody who spoke with the Daily Caller could guess why.

“I can’t really answer the question. The question’s a good one, but I cannot explain it,” Meissner said.