The smallpox vaccine used to be the most dangerous vaccine in human history. The COVID vaccines are over 800 times more deadly. 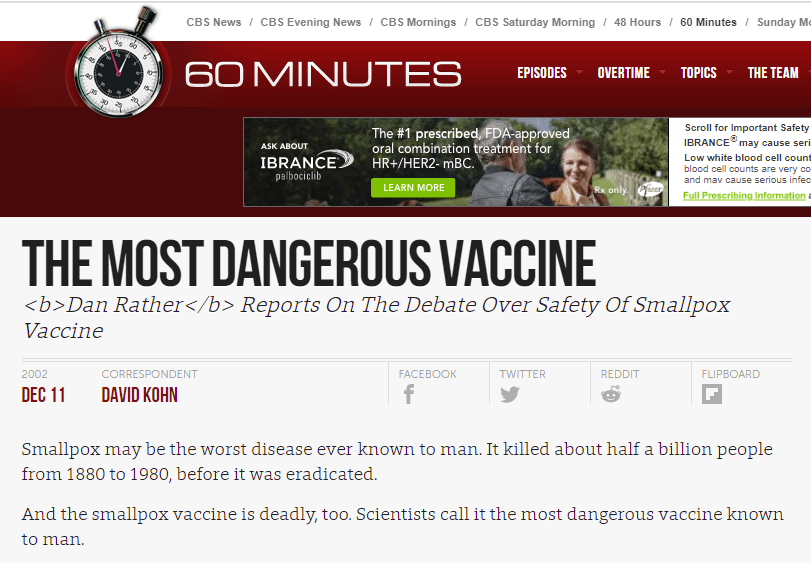 Almost 20 years ago, 60 Minutes ran a story “The Most Dangerous Vaccine” which quoted Paul Offit:

“We know if we immunize a million people, that there will be 15 people that will suffer severe, permanent adverse outcomes and one person who may die from the vaccine,” says Dr. Paul Offit, one of the country’s top infectious disease specialists, and he knows all about vaccines that prevent those diseases. In his lab at Children’s Hospital of Philadelphia, he studies and creates new vaccines. There’s nothing new about the smallpox vaccine.

The vaccine was created in 1796. The vaccine used today is essentially the same, Offit says. “We tend to think of vaccines as being very safe and every effective, which they are. But all the vaccines that we use today are the result of modern technology. That’s not true of the smallpox vaccine. It has a side effect profile that we, we would not accept for vaccines today,” he says.

That makes the COVID vaccines the new leader by a long shot: the most dangerous vaccine ever created in history. They are 800X more dangerous than the smallpox vaccine with respect to death, and over 25X worse with respect to permanent disability (since the permanent disability rates are 10% higher than the death rate as you can see from the OpenVAERS redbox summary for US reports).

According to Offit, this rate of death and disability is unacceptable. I couldn’t agree more. I’ve been calling for a halt to these vaccines since May 25, 2021 when I wrote this very long article for TrialSiteNews summarizing what I found after 3 weeks of intensive research.

Fast forward to the present. Offit voted to approve these same vaccines for kids at the October 26 VRBPAC meeting because he refuses to look at the safety analysis (done using 8 different data sources). Offit thinks nobody has died or been permanently disabled by these vaccines. What does he think caused all those VAERS reports? I wish I could ask him that question. He doesn’t think there is a single death caused by the vaccine. That’s impossible. The VAERS data shows that virtually all the deaths in VAERS are excess deaths. If the vaccine didn’t cause those deaths, what did?

Nobody at the FDA, CDC, or on the committees has figured out that the COVID vaccines are 800X more deadly than the former record holder. I’m pretty sure I’m the first one to figure this out.

Why won’t Offit debate my team of vaccine experts?

Dr. Offit: my team of experts are the biggest and most prominent misinformation spreaders on the planet. If you want to end vaccine hesitancy, then show the world we are wrong by agreeing to a debate. Here’s the offer made by TrialSiteNews: Challenge to the Scientific Community – It’s Time for Honest and Open Debate on Vaccine Safety. Will you accept? Or will you admit you are afraid of open scientific debate?

By Steve Kirsch  ·  Tens of thousands of subscribers