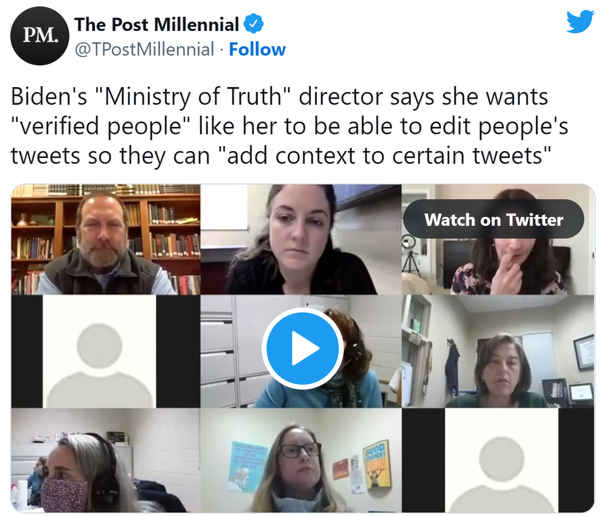 State medical boards wary of micromanaging what doctors can say about COVID-19 — from the utility of masks to treatments such as ivermectin — now have to contend with their national organization.

The Federation of State Medical Boards (FSMB), which cosponsors the U.S. Medical Licensing Examination, approved an ethics committee report on “misinformation and disinformation” at its annual meeting.

It urges the group’s members to add explicit policies to clarify “expectations” about what doctors can say and do related to COVID, citing “the increased prevalence of, and harm caused by, physician-disseminated misinformation in this ongoing pandemic.”

Biden's "Ministry of Truth" director says she wants "verified people" like her to be able to edit people's tweets so they can "add context to certain tweets" pic.twitter.com/KgMxUn3Hs6

The FSMB report could leave doctors guessing as to how much they can deviate from government narratives by, for example, telling patients about emergency heart problems tied to COVID vaccines among Israelis 16-39, without triggering an investigation.

The report defines misinformation as “false, inaccurate or misleading” claims as judged by “the best available scientific evidence at the time,” which comes from “peer-reviewed journals, methodologically-sound clinical trials,” clinical practice guidelines and “consensus-based documents that receive broad acceptance from the medical and/or scientific communities.”

Doctors could also cite a “plausible basis in theory” for their views if they don’t have such evidence.

While state boards should not be dissuaded by possible First Amendment challenges by doctors targeted for sanction, the FSMB report encourages them to consider reeducation through “conversation … informal and non-public notices and … educational and remedial options” as better options in “certain circumstances.”

FSMB President and CEO Humayun Chaudhry told MedPage Today that misinformation and disinformation, or “knowingly misleading the public for personal gain,” is nearly as dangerous as “the spread of the virus itself.” But he added that many doctors “made the necessary changes” when warned they were spreading misinformation.

The group didn’t answer Just the News queries on how its recommendations might affect challenges to COVID orthodoxy that are later deemed to have merit, such as the lab-leak theory and vaccine-associated myocarditis in young people.

Even as it warns physicians not to make recommendations based on “outdated” information, the report itself promotes an arguably outdated consensus about mask efficacy. It approvingly cites FSMB’s October 2020 statement that physicians have a “professional responsibility” to wear face coverings in clinical settings to protect “society as a whole,” without distinguishing between high-quality versions such as N95s and masks not designed to filter aerosols, such as cloth and surgical.

Research with control groups, before and even during COVID, has found negligible, if any, protective effect from masks in general. A widely touted randomized controlled trial of Bangladeshi villages, for example, found no protection from surgical masks in age groups below 50 and zero effect in any age group for cloth masks.

FSMB’s view of masks may face another challenge from Italian researchers who studied carbon-dioxide buildup in masks and published their results last week as a preprint, meaning it hasn’t been peer-reviewed.

Seeking to cure deficiencies in prior research, including a peer-reviewed German study that was later retracted, the researchers used “professional, real-time capnography with water-removal tubing” to measure CO2 levels while wearing no mask, surgical masks and FFP2 respirators, which are comparable to N95s.

They recruited 102 healthy volunteers in Italy’s Ferrara province, ages 10-90, who sat and breathed through their nose for 10 minutes in each state.

The “mean inhaled air CO2 without masks” was 458 parts per million, while the mean hit nearly 5,000 ppm with surgical masks, “which is the long-term occupational exposure (eight hours) threshold” recommended by U.S. and European occupational safety agencies, the study says. Surgical masks crossed that threshold in 40% of measurements.

The highest concentrations were found in the FFP2 respirators, with a mean of 9,396 ppm and 99% of participants exceeding the regulatory threshold, although blood oxygen saturation “did not differ substantially” in any mask state.

Minors showed the highest concentrations by age group, with a mean of 6,439 ppm for surgical and 12,847 ppm for respirators, though they were also the smallest group with only 10 participants. Higher CO2 concentrations were “significantly associated” with faster breathing in both masks.

The researchers emphasized the concentrations were likely lower than in a real-world setting because participants were at “complete rest and in a constantly ventilated room.” Talking and “low level physical activity” are associated with increased CO2 concentration.

Corresponding author Cecilia Acuti Martellucci of the University of Ferrara’s Department of Medical Sciences didn’t respond to Just the News queries about early feedback on her study, including whether it was unfavorably compared to the retracted German study.

Medical misinformation complaints against doctors have provoked opposite reactions in some states depending on their political leanings, as illustrated by Democrat-run Maine and Washington versus GOP-run Tennessee and Idaho.

Maine suspended a doctor’s license and ordered her to take a “neuropsychological evaluation,” while Tennessee now requires its Board of Medical Examiners to get legislative sign-off on any disciplinary process relating to COVID treatments.

America’s Frontline Doctors leader Ryan Cole’s practice straddles the Washington-Idaho border, but only the former has acknowledged investigating him despite a campaign by the Idaho medical establishment against Cole, whose Idaho license expires June 30.