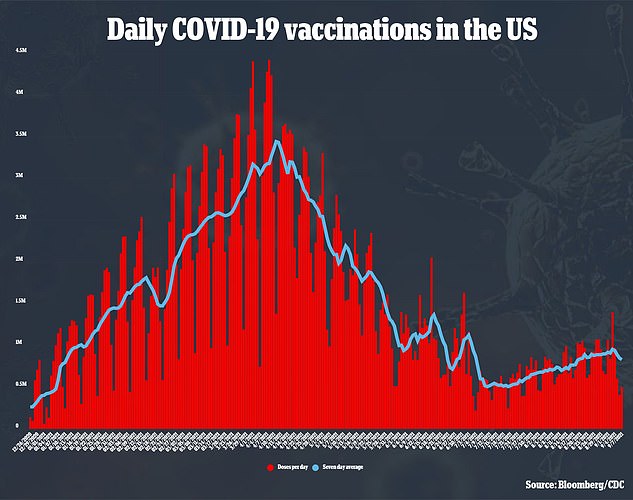 President Joe Biden will require all of the roughly 2.1 million federal workers to be vaccinated as part of a series of new mandates he’ll push in a major speech on the COVID pandemic Thursday.

There will be limited exceptions but any federal employee who refuses the shot can be fired, White House press secretary Jen Psaki said Thursday.

Federal employees and contractors will have 75 days to get vaccinated.

The executive order will not include an option of being regularly tested to opt out of the vaccine requirement. The orders will apply to workers in the executive branch but not the congressional or judicial.

‘There will be limited exceptions for legally recognized reasons disability or religious objections,’ Psaki said. Anyone who ‘fails to comply, they will go through the standard HR process, which includes counseling and face disciplinary action,’ she added.

She confirmed that action could include termination of employment.

‘Hopefully it won’t come to that,’ she said.

All federal employees have 75 days to get vaccinated or get FIRED
She said the administration wanted the federal government to serve as an example for other businesses and organizations when it comes to vaccines.

‘Obviously the federal workforce is one of the largest in the country and we would like to be a model to what we think other businesses, organizations should do,’ she noted. ‘The expectation is that if you want to work with federal government or be a contractor, you need to be vaccinated unless you are eligible for one of the exemptions.’

The American Federation of Government Employees, the largest union of federal workers, said they weren’t consulted on the order.

‘Workers deserve a voice in their working conditions,’ the group said in a statement. ‘Neither of these positions has changed. We expect to bargain over this change prior to implementation, and we urge everyone who is able to get vaccinated as soon as they can do so.’

And the National Federation of Federal Employees, another government workers union, said they didn’t receive advance notice of the executive order.

Psaki dismissed questions about the unions not being consulted. The Biden White House has bragged about its pro-union stance.  At a Labor Day event on Wednesday, Labor Secretary Marty Walsh said President Biden told him: ‘This is labor’s house.’

‘We have a range of consultation with labor unions, and that has been the case for several weeks and months as we have worked to implement additional steps,’ Psaki said.

‘But our objective here is to continue to save lives.’

The president is putting more pressure on states, businesses and schools to get people vaccinated as the Delta variant causes the case rate to continue to rise in the United States.

But Republican-led states including Texas and Florida have pushed back and are in the process of trying to ban the orders being imposed.

Psaki  indicated in interviews on Thursday morning that more mandates were coming.

‘What we’ve seen work over the past couple months are mandates, requirements, making it so workers in the federal government or others have to get vaccinated. We’ve seen it work and we’ve seen it become more popular,’ Psaki said on MSNBC’s Morning Joe.

‘He’s going to speak directly to vaccinated people and their frustrations and he wants them to hear how we’re going to build on what we’ve done to date to get the virus under control,’ she said.

The Department of Health and Human Services and the Department of Veterans Affairs already mandate vaccines for their employees. The military also has issued a vaccine mandate.

President Joe Biden will require all federal workers to be vaccinated, a part of a series of new mandates he’ll push in a major speech on the COVID pandemic

There have now been more than 40 million cases of COVID recorded among Americans, which is nearly one-fifth of the global total of cases.

Biden, in his remarks scheduled for 5 p.m. ET time, will address six areas where his administration can push for more Americans to get vaccinated: that includes new plans to get more people vaccinated, enhancing protection for those who already have had shots, keeping schools open, increasing testing and mask-wearing, protecting the economic recovery and improving healthcare.

The president will also urge business to implement strict vaccine requirements. Major corporations like WalMart, McDonalds and Disney require high-level employees, such as managers or white-collar workers, to get vaccinated. Most hospitals and universities require the vaccine. On Thursday the Los Angeles school district also said they would require it.

President Biden and administration officials have repeatedly emphasized the best way for life to return to normal is for people to get vaccinated.

Biden also plans to call for a global summit, to be held during the U.N. General Assembly later this month, to respond to the pandemic and talk about how to get more vaccine supply to the developing world.

About 27 per cent of the eligible U.S. population age 12 and older have not received any COVID vaccine, according to data from the Centers for Disease Control and Prevention. Meanwhile about 75 per cent of Americans have received at least one shot and 53 per cent are fully vaccinated.

In December 2020, after he was elected but before he took office, Biden said he didn’t think COVID vaccines were necessary.

‘I will do everything in my power as president to encourage people to do the right thing and when they do it, demonstrate that it matters,’ he said at the time.

Meanwhile, Dr. Anthony Fauci said this week Americans are getting infected with COVID at 10 times the rate needed to end the pandemic.

‘We’re still in pandemic mode, because we have 160,000 new infections a day,’ Fauci told Axios. ‘That’s not even modestly good control.’

‘In a country of our size, you can’t be hanging around and having 100,000 infections a day,’ he continued. ‘You’ve got to get well below 10,000 before you start feeling comfortable.’ 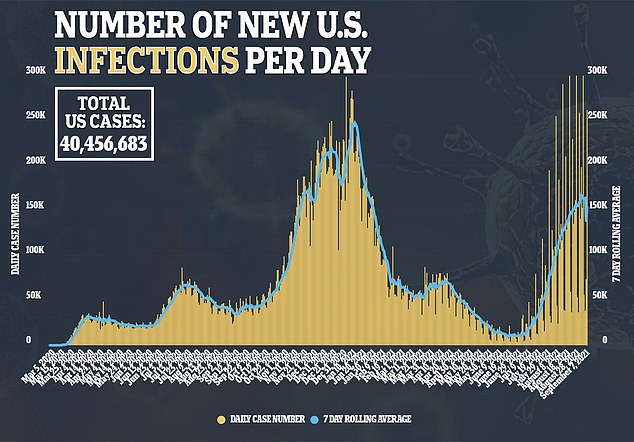 The vaccination rate among Americans has increased since July, which is when the Delta variant caused case rates to spike, but it remains low in Southern states like Florida and Texas.

Biden will also address the divide between the vaccinated and unvaccinated.

‘He also will acknowledge the fact that the 175 million people who are vaccinated out there, many of them are frustrated. They want to go back to normal. Of course they do. That’s going to require moving more unvaccinated people to a vaccinated status. That’s what he’ll talk about,’ Psaki told CNN on Thursday morning.

In his remarks, Biden also will seek to return his focus to the COVID pandemic, resetting the narrative after the difficult evacuation of Americans from Afghanistan and from Democratic in-fighting on Capitol Hill over his $3.5 trillion budget filled with social programs.

The Biden administration has already taken steps to try and stop Republican-led states from rolling back COVID mandates.

Last month, the Education Department announced a civil rights investigations into five states that banned schools from imposing mask mandates, claiming their stance could discriminate against students with disabilities or health problems.

Education chiefs in Iowa, Oklahoma, South Carolina, Tennessee, and Utah have been told they are under investigation.

‘It’s simply unacceptable that state leaders are putting politics over the health and education of the students they took an oath to serve,’ said Education Secretary Miguel Cardona.

‘The department will fight to protect every student’s right to access in-person learning safely.’

NYPD cops are ordered to get vaccinated against Covid, get weekly tests on their own time, or go home without pay

NYPD officers have been told they will be sent home without pay unless they get vaccinated against Covid or provide a weekly negative COVID-19 test which they have taken on their own time.

The new guidelines follow an executive order by Mayor Bill de Blasio about coronavirus protocols for city workers, in response to the surge of the highly contagious Delta variant.

The rules will go into effect on Monday, September 13.

Civilians and paid members of the NYPD who choose to remain unvaccinated will have to get a PCR or a rapid PCR test every seven days on their own time and upload results to an internal contact-tracing system.

Tests have to be done on a weekly basis while officers are off-duty, but the NYPD announced it will soon allow its workforce to get tested at 15 sites across the city at no charge, according to a memo.

At-home antigen tests will not be accepted by the department, under the new police policy.

‘Members of the Service who fail to comply with this directive will not be permitted to work and will be ineligible to receive pay for each day of noncompliance,’ the memo reads.

That is far lower than the wider New York City population, which has a 61 percent vaccination rate.

The NYPD has one of the worst vaccination rates among police departments in big cities across the country.

Other cities, including Los Angeles and Washington D.C., have more than half of their workforce vaccinated, while Honolulu remains the only city in the U.S. with three-quarters of its police department vaccinated.