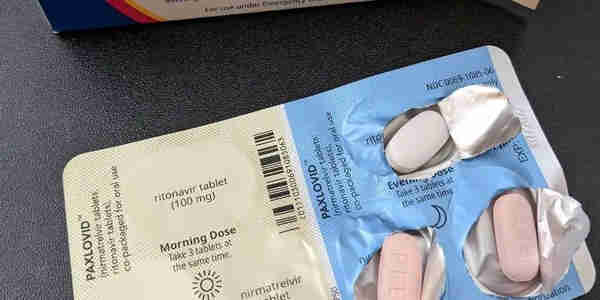 Pfizer announced Friday that a recent large, late-stage trial found that its COVID-19 antiviral pill, Paxlovid, failed at preventing symptomatic infection of people living with a person who has the disease.

The trial enrolled 2,957 participants aged 18 and older who live in the same household as another person who has COVID-19 with symptoms. They were given either Paxlovid or a placebo twice daily for five or 10 days.

“These results … were not statistically significant and, as such, the primary endpoint of reducing the risk of confirmed and symptomatic COVID-19 infection in adults who had been exposed to the virus through a household contact was not met,” the company said in a release.

“While we are disappointed in the outcome of this particular study, these results do not impact the strong efficacy and safety data we’ve observed in our earlier trial for the treatment of COVID-19 patients at high risk of developing severe illness,” Pfizer Chief Executive Albert Bourla said in a statement.

Paxlovid consists of two different antiviral drugs—nirmatrelvir and ritonavir. It is currently approved or authorized for conditional or emergency use in more than 60 countries to treat COVID-19 patients at high risk of severe illness.

According to the U.S. Food and Drug Administration (FDA), ritonavir “may cause liver damage” and so “caution should be exercised when giving Paxlovid to patients with preexisting liver diseases, liver enzyme abnormalities or liver inflammation.”

The FDA also said that using Paxlovid in people with uncontrolled or undiagnosed HIV-1 infection “may lead to HIV-1 drug resistance.”

Pfizer’s announcement comes as researchers at the National Institute of Allergy and Infectious Diseases (NIAID) are planning to investigate how and why some people who have taken a five-day course of Paxlovid experience a repeat of COVID-19, reported Bloomberg.

Clifford Lane, deputy director for clinical research at NIAID, told the outlet that the issue is “a pretty urgent thing for us to get a handle on.” He said the agency is discussing with scientists at the Centers for Disease Control and Prevention (CDC) about carrying out a number of possible epidemiological and clinical studies to learn about these rebound cases.

Researchers at the VA Boston Healthcare System earlier this week published a preprint (pdf) about a case study of a 71-year-old man who quickly recovered from COVID-19 after taking Paxlovid, only to have a relapse of symptoms and an increase in viral levels just nine days after his first COVID-19 positive test. The symptoms and viral levels resolved days later. The COVID-19 rebound case related to Paxlovid is the first to be documented in medical literature.

Paul Sax, a Harvard Medical School professor and the clinical director of the Division of Infectious Diseases at Brigham and Women’s Hospital, told Bloomberg that if people have symptoms that worsen after taking Paxlovid, “it’s probably still COVID.”

Sax on April 25 had reported about a rebound of COVID-19 in one of his HIV patients after the person took Paxlovid.