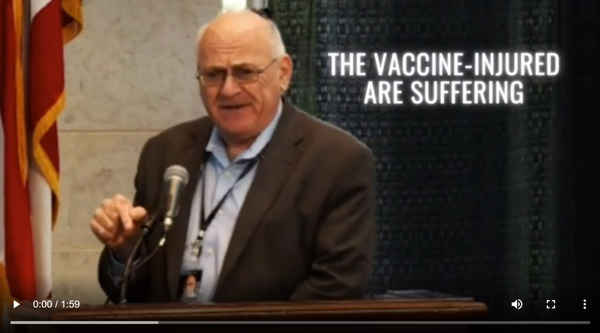 Fox News anchor John Roberts recently asked on Twitter: “Question: anyone out there having chest pain after getting the booster?”

Over 4,600 replies later, it would appear that many of his Twitter followers have indeed suffered chest pain, along with many other adverse events after getting injected with the mRNA or Adenoviral Vector DNA genetic products.

“I had numerous internal bleeding and eventually a mysterious heart issue after the first 2 shots. No boosters . . . EVER!!!!” responded sports talk radio host Tony Bruno.

“To my shock yes. One week after booster of Pfizer (had two astra zenecas first) I had chest pain and palpitations for a week,” replied Jenny Weyman, an Australian nurse practitioner. “Distressing. Went to hospital to get checked. No answers. I gave the vaccines also. It was really not pleasant. Unsure if I want mRNA vaccine again.”

“I’m a FNP [Family Nurse Practitioner] in Az. & was ER nurse through all of Covid. Recently had 2 close friends have major complications after the booster,” said Jimmy May. “One is a 40-yr-old MD. He had bad shortness of breath, chest pain, and pitting edema in both legs. Turns out he was basically in heart failure 2wks post boost.”

Why yes John many have…reach out in DMs I will get you up to speed. pic.twitter.com/d4oqkCWT0X

The charts are based on an insurance industry expert analysis of the CDC’s aggregate data.  All age groups experienced excess mortality, especially millennials, Dowd explained during an appearance on Steve Bannon’s War Room, back in March.

“What we found is pretty shocking,” he told Bannon. “The millennial age group—25 to 44—experienced an 84 percent increase in excess mortality in the fall,” Dowd said, calling it “the worst  excess mortality” numbers in history.

Dowd pointed out that deaths accelerated after the mandates and boosters came out.

“Starting in the summer into the fall, with the mandates and the boosters, there were 61,000 excess millennial deaths,” Dowd said. “Basically, millennials experienced a Vietnam War in the second half of 2021.”

The vast majority of the 4,647 replies to Roberts’ tweet describe heartbreaking tales of woe from people who trusted the authorities and subjected themselves to the experimental “vaccines.”

The devastating response to Roberts’ tweet is reminiscent of a Detroit news station’s experience, last September.

WXYZ-TV asked Facebook users to submit stories about unvaccinated people dying of COVID, and got an unexpected response.

“After the vaccines were available to everyone, did you lose an unvaccinated loved one to COVID-19?” WXYZ-TV asked in the Facebook post. The query garnered more than 260,000 comments, and 214,000 shares, and is probably WXYZ-TV’s most “popular” Facebook post ever.

The overwhelming majority of commenters shared stories of terrible and alarming vaccine side effects, or posted about their fully vaxxed loved ones dying of the coronavirus. The viral post appeared to become a forum for victims of the vaccines to share their stories.

Independent journalist Emerald Robinson highlighted a number of the tragic responses to Roberts’ tweet on her Substack, and pointed out that Fox News continues to enforce a vaccine mandate on its employees. The company removed the choice for employees to opt for a test instead of a shot in December.

Adding insult to injury, Chris Pandolfo at the Blaze reported in March, Fox News, along with many other media outlets, took money from the Biden regime while they pushed a pro-COVID vaccine narrative on their networks, without disclosing the conflict of interest to their audiences.

HHS revealed that it purchased advertising from major news networks including ABC, CBS, and NBC, as well as cable TV news stations Fox News, CNN, and MSNBC, legacy media publications including the New York Post, the Los Angeles Times, and the Washington Post, digital media companies like BuzzFeed News and Newsmax, and hundreds of local newspapers and TV stations. These outlets were collectively responsible for publishing countless articles and video segments regarding the vaccine that were nearly uniformly positive about the vaccine in terms of both its efficacy and safety.

This op-ed was basically a personal plea for the American public to take medical advice from a news organization that was secretly taking money from the Biden Administration to say positive things about dangerous drugs.

‘At Newsmax, we have strongly advocated for the public to be vaccinated. The many medical experts who have appeared on our network have been near unanimous in support of the vaccine,’ Ruddy said. ‘I myself have gotten the Pfizer vaccine. There’s no question in my mind, countless lives would have been saved if the vaccine was available earlier.’

This act of betrayal is “an astonishing breach of journalistic ethics that should never be forgiven or forgotten,” Robinson declared.

In a long, and spectacularly tragic Twitter thread last week, a previously healthy outdoorsman from Breckenridge, Colorado, described what the Moderna jab did to upend his life.

On his blog, Louie Traub, describes himself as a “Bike pedaler, snowboard instructor, picture snapper, dog lover, [and] weather geek” who is “addicted to the view from the top of a mountain.”

“400 days of hell. 400 nights wondering if I’ll wake up in the morning. A life robbed by the Moderna vaccine, causing POTS, MCAS, small fiber neuropathy, asthma, vasculitis, clots. No research, treatment, answers, or help. Left for dead with nothing but memories of mountaintops,” Traub wrote in the heartbreaking thread.

Traub said his adverse events started on the day of his second shot, and got worse as time went on. He says he got nowhere when he called Moderna for answers, and nowhere when he went to medical doctors for help.

On the day of my second shot I experienced severe flu-like symptoms lasting 48 hours: Nausea, vomiting, fever, aches, fatigue, migraine, tachycardia. Then five days after Moderna #2 my entire world was flipped upside down when the neuro and cardio torture began . . .

I called Moderna, which said their medical team would respond, but they never did. So I called again and again over the following months w/same response. My VAERS report was never followed up on. I contacted my governor, senator and local representative, all of which ignored me.

I went to the ER where I was gaslit and dismissed. This behavior from most medical ‘professionals,’ is to this day still standard for vaccine injured patients. My PCP wouldn’t write a referral to a specialist for evaluation, except mental health, which also delayed the process.

Over the following months, symptoms evolved to include muscle spasms, stabbing ear pain, numbness in hands and arms, high blood pressure, dizziness. After waiting months for an appointment, I had a rheumatologist cancel on me saying, ‘we don’t study vaccine adverse reactions.’

Throughout the fall/winter I saw immunology, cardiology and neurology, all of which quietly admitted they see vax-injured patients daily, but had no idea what was going on or how to help, other than run tests that aren’t made for this new diagnosis: Post-COVID Vaccine Syndrome.

I was diagnosed with a host of cardio, immune, neuro issues, but still left without answers. Only additional symptoms, like stabbing chest pain, burning extremities, increased pain and numbness, muscle and nerve twitching, with nighttime hand paralysis on a couple of occasions.

32 appointments total (22 in 2022) and 400 days later, I have an open-minded healthcare provider and am starting a treatment protocol that’s helped others like me, but not all. It’s worth a shot. And if it doesn’t work, IVIg may be on the back burner if insurance will approve it.

I assume my story provides some sort of value to others or you wouldn’t be reading this. Whether it’s being transparent about the risks, doing the job the media fails to do, or inspiring fellow injured to use their voice to tell their story and to call out the BS. On that note . . .

What does it take to get the @CDCgov @NIH @US_FDA to acknowledge vaccine injuries are real, provide answers, and research a treatment to help the people who took one for the team, but are being ignored and swept under the rug?

Because the medical establishment and corporate media suppress stories about vaccine injuries, news consumers have to rely on other sources to get a sense of what’s going on.

Mark Crispin Miller, a Professor of Media, Culture, and Communication at New York University, gives daily updates on vaccine deaths throughout the world on his “News From the Underground” Substack.

“This is a real disease. This is not imagined,” Marik said in an interview withCD Media. “These people suffer in silence.”

Marik is a critical care doctor from South Africa and former professor of medicine who served as chair of the Division of Pulmonary and Critical Care Medicine at Eastern Virginia Medical School in Norfolk, Virginia until his resignation in January 2022. Kory is a critical care physician who became frustrated with the medical establishment’s corrupt handling of the pandemic, and formed the FLCCC with Marik to help treat COVID patients.

“There’s no disease in medicine that you can’t treat. It’s never too late,” Marik said. “These vaccine-injured people are suffering and we need to do something.”

“There are millions of people that are being ignored, they’re not getting treatment, and they’re suffering,” Marik said during a Children’s Health Defense media event earlier this month.

The doctor said that he knows what is causing their pain, and how to treat them, but the medical establishment refuses to let doctors treat these people.

“The NIH knows about this. They know what causes it, and they will not treat these people, and that has to change!”

“My heart is so broken,” he said through tears. “I can’t keep quiet anymore. This is a humanitarian crisis!”

“We know there’s an epidemic of vaccine injuries,” added Kory. “These are the most toxic medical interventions known to man.”

“The NIH said there was no treatment for COVID. That’s why we put the FLCCC together,” Marik explained. “And now we’re doing the same for the vaccine injured because nobody wants to treat them,” Marik said, choking up again. “Well you know what? We will treat them.”