I’m a naval officer who’s spent the last 15 years on active duty. I’m now potentially facing forcible discharge if I won’t submit to taking the COVID vaccine. Here’s a thread on just what a scandal that is. All data claims will be linked. 1/x🧵👇
Last week the Army released an EXORD (execute order) telling its troops to prepare for mandatory vaccination in September. Though he has the authority, it’s not likely the President will mandate vaccination without full FDA approval, so look out for that development. 2/x

Here’s a link to the story: armytimes.com/news/pentagon-…3/x 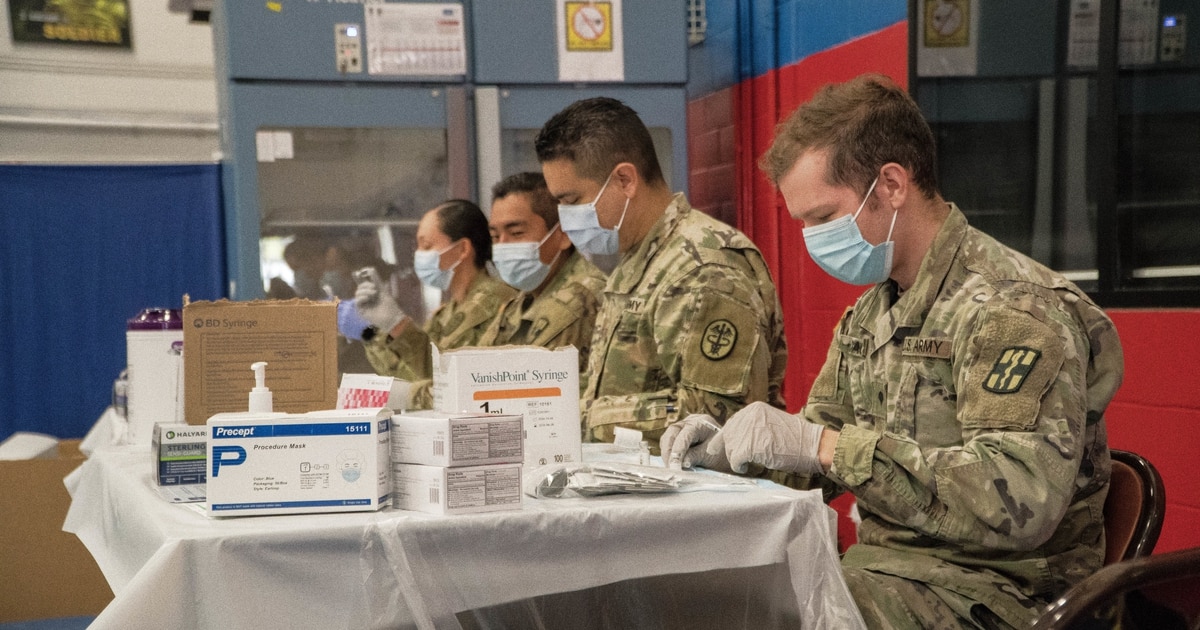 Prepare for mandatory COVID vaccines in September, Army tells commandsThe directive came from an execute order sent to the force by Department of the Army Headquarters.https://www.armytimes.com/news/pentagon-congress/2021/07/01/prepare-for-mandatory-covid-vaccines-in-september-army-tells-commands/
The Department of Defense (DoD) will assuredly move as a whole, meaning all branches will require vaccination on the same schedule. 4/x
I’ve spoken to two command chaplains regarding religious exemption (I’m a Christian abortion abolitionist and cells from aborted children were used in the vaccines’ development), and am told exemptions won’t likely be granted.5/x
So, my choices are vaccination and forcible discharge.We’re just a few years removed from the military’s mandatory anthrax vaccine debacle, and here’s hoping the administration remembers what a disaster that was. 6/x

Numerous service members were harmed by a vaccine they didn’t need; many more had their careers cut short, were dishonorably discharged, court martialed, and even imprisoned for their refusal to get the shot. Here’s a good retrospective: militarytimes.com/news/pentagon-…7/x

Troops who refused anthrax vaccine paid a high priceAn unknown fraction of service members who were punished for refusing the anthrax vaccine in the late 1990s and early 2000s have sought to have their records corrected, but only a few have had success…https://www.militarytimes.com/news/pentagon-congress/2021/06/17/troops-who-refused-anthrax-vaccine-paid-a-high-price/
So let’s take a look at the rationale behind the forthcoming DoD mandate. By their own accounting (as of two days ago) 202,567 active duty service members have had COVID, of whom 26 have died.8/x
Even allowing for the absurdist definition of a “COVID fatality” (death for whatever reason within 28 days of a positive RT-PCR test run to 40+ cycles), for military personnel, COVID has a better than 99.987% survival rate.9/x

Coronavirus: DOD ResponseThe Defense Department is working closely with the Department of Health and Human Services and State Department to provide support in dealing with the coronavirus outbreak.https://www.defense.gov/Explore/Spotlight/Coronavirus/DOD-Response-Ti-/
Here’s the plain truth: COVID-19 is utterly inconsequential to the military. Don’t get me wrong: our response to it has been anything but inconsequential.11/x
We’ve halted training, destroyed unit cohesion and morale, strapped worthless pieces of cloth over everyone’s faces for the last year, and spectacularly destroyed our warfighting readiness in the name of COVID, but the pathogen itself is meaningless.12/x
I defy you to find a group of 2 million US adults at lower risk from COVID. It doesn’t exist. We are overwhelmingly young, fit, and free of comorbidities. Compared to other causes of death, COVID isn’t even on the radar.13/x
Between 2006 and 2021, roughly 400 service members died annually of accidents. 300 committed suicide. More than 200 died of random illnesses and injuries. Here are the DoD data: fas.org/sgp/crs/natsec…14/x
Over 1,000 service members were killed on motorcycles between 1999 and 2012, yet we still permit their use. Here are the Army data: phc.amedd.army.mil/PHC%20Resource…15/x
Beyond the laughably insignificant threat posed by COVID to the force, consider the aggressively unintelligent plan to expose the entire force to a drug with zero long-term safety data.16/x
What if there are short-, mid-, and long-term negative effects? Who will defend the nation once the entire force is compromised?17/x
There’s a reason drug trials always contain a control group, yet the political appointees and Flag and General Officers running our military seem perfectly willing to potentially jeopardize 100% of the force in the name of political agreeability.18/x
We do a lot of talking about “forceful backup” and “warrior toughness,” but you won’t hear a word from that cadre of esteemed “yes” men motivated by varying mixtures of a desire to get promoted and a fear of getting fired.19/x
For those who’ll respond with “But you’ve taken plenty of vaccines in the military.” You’re right. I have. And the FDA’s multi-year safety data were available for each. Not so for this vaccine.20/x
There’s a reason we maintain Material Safety Data Sheets on all hazardous chemicals on ships. Or would you tell our Sailors, “You volunteered. Now shut up and stick your hand in that acid”? Sure hope not.21/x
And for those who’ll invariably respond with “George Washington forced all his troops to be inoculated against smallpox,” that’s cute. Be sure to follow it up with “For every 1 soldier lost to action with the British, 10 died of disease.”22/x
Offer me an experimental drug for a pathogen that kills 10x more soldiers than bullets during time of war and I might have a different reaction.23/x
In sum, we’ve learned to live with countless threats infinitely more serious than COVID, and all without resorting to extreme measures. COVID, however, is different.24/x
This thread until now has merely demonstrated how absurd the argument for mandatory vaccination is. From this point on, I’ll explain why I think the argument is being made despite its absurdity.25/x
Remember if you can the 2020 election. We haven’t seen anything as contentious or as unusual in a lifetime. Whatever your politics (I genuinely don’t care), the fact remains that roughly half the electorate is convinced that something fishy happened around November 3rd.26/x
Whether you believe the theories around ballot manipulation, burst pipes in Atlanta, etc., the interference in elections by several state governors and subsequent top cover from various wings of the judiciary are matters of fact, not opinion.27/x

Role of the States in Regulating Federal Elections | Constitution Annotated | Congress.gov | Library of CongressAn annotation about Article I, Section 4, Clause 1 of the Constitution of the United States.https://constitution.congress.gov/browse/essay/artI_S4_C1_1_1_1_1/
Still, governors in numerous key states appropriated this authority to themselves, mailing unsolicited ballots, extending deadlines, suspending or weakening signature verification, etc.29/x
Various courts nearly universally permitted their usurpations, reasoning that, if everyone is sufficiently scared of a virus, the Constitution can be disregarded.30/x
Why do I mention the election? Is it sour grapes over who won the White House? Not a chance. I’ve served under four Presidents, and I don’t much care who’s in the Oval Office.31/x
Given the chance, I’ll serve under a couple more, whoever they are. One of America’s great marvels is the constancy of its military, no matter which party is in power.32/x
I mention the 2020 election because it and COVID policy are inextricably intertwined. Despite the glaring unconstitutionality of what happened during the election,33/x
if enough of the populace are convinced that the situation really was dire enough to warrant suspending the Constitution (without actually saying so), then what happened during the election can be permitted.34/x
This position, however, cannot withstand dissent. It requires absolute fealty, particularly from the Armed Forces. And how do you prove your allegiance to this narrative? By rolling up your sleeve.35/x
You’d have to be genuinely convinced of the existential threat posed by this virus to volunteer for an experimental vaccine for which no one – not the pharmaceutical giants nor the government mandating its acceptance – is liable in case things go wrong. That’s real faith.36/x
Failure to volunteer for vaccination – to say nothing of refusal of mandated vaccination – is the sort of rebellion that cannot be tolerated. Those who question the reality of the COVID apocalypse are dangerous insider threats who must be purged from the ranks.37/x
Consider that a great majority of those resistant to vaccination are Republicans. Mandating vaccination is an admittedly brilliant strategy for purging them from the force, all in the name of public health.38/x

Rather than calling them what they really are (ideological threats), they can be removed on the grounds that they are biological threats. Here’s reporting on the political disparity on vaccinations from a government-funded news organization: voanews.com/covid-19-pande…39/x

Poll Finds Startling Difference in Vaccinations Among US Republicans and DemocratsA Washington Post-ABC News poll has found a startling difference between Democrats and Republicans as it relates to COVID-19 vaccination. The poll found that while 86% of Democrats have received at le…https://www.voanews.com/covid-19-pandemic/poll-finds-startling-difference-vaccinations-among-us-republicans-and-democrats
The rest of COVID policy, too, is tied to acceptance of the official narrative. That is, if COVID really wasn’t the world-ending catastrophe it was made out to be, several of the highest-ranking public officials would have to answer for the effects of their edicts:40/x
economic disaster, unemployment, spikes in suicides, increases in crime rates, domestic violence, substance abuse, etc. All can be forgiven if COVID was worse. If it wasn’t, however, people have blood on their hands, and that’s a conversation they’d rather not have.41/x
In the end, I’m just a guy who wants to keep serving his nation, providing for his family, contributing to his community, and minding his own business.42/x
I know a lot of people say this, but those who’ve worn the uniform know it to be true: it really is an honor to serve all of you.43/x
For the last 15 years I’ve sacrificed or risked my comfort, my safety, and my life on a handful of oceans and in various sandy spots to support and defend the Constitution and ensure the welfare of people who’ll retweet this and despise it alike.44/x
Whichever you choose, it’s why I put on the uniform everyday. Here’s hoping I get to keep doing it so you get to keep doing it.45/x

Here’s this thread all in one place. Thread by @WhyWherever on Thread Reader AppThread by @WhyWherever: I’m a naval officer who’s spent the last 15 years on active duty. I’m now potentially facing forcible discharge if I won’t submit to taking the COVID vaccine. Here’s a thread o…https://threadreaderapp.com/thread/1413705439901069314.html
Obligatory disclaimer: I don’t speak for the Navy, rather as a citizen who serves in the Navy. Views entirely mine.
It seems this thread is taking off. It also seems @TuckerCarlson is reading long Twitter threads on air. If there’s any chance we can shine more light on this issue, feel free to tweet this at him. The careers of a lot of exceptional service members hang in the balance.
Perhaps @RealCandaceO might be interested given her concern for informed consent.
Great thanks to @ConceptualJames who first gave this thread its virality (pun intended) and to @Cernovich and @JackPosobiec who pushed it further.I’ve appreciated your stands for some time and appreciate the lift. Here’s hoping we can sway both public opinion and policy.