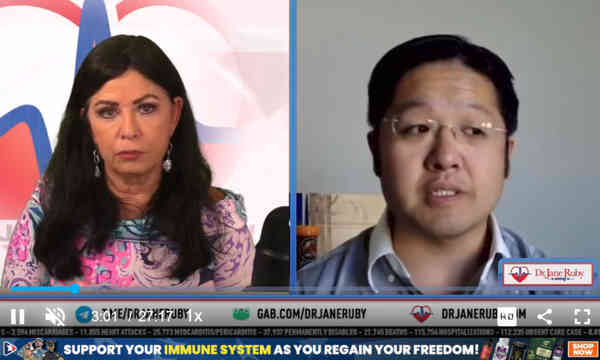 Share to the world...
Source Link: https://americafirstreport.com/molecular-biologist-human-genome-poisoned-by-mrna-vaccines-can-be-passed-on-to-future-generations/
BY BELLE CARTER
in Cross-Posted, Opinions

Leaked communications between Pfizer and European Medicines Agency revealed that 50 percent of the contents of the pharmaceutical giant’s Wuhan coronavirus (COVID-19) vaccine were left undeclared before the fast-tracked approval of the rollout went out.

Canadian physician and molecular biologist Dr. Daniel Nagase said during his recent appearance on the “Dr. Jane Ruby Show” that Pfizer admitted to declaring that only half of the mRNA injections are actually spike proteins. This protein will throw in a very indirect means to develop antibodies in human bodies.

The show’s host, Dr. Jane Ruby, said: “Pfizer was able to negotiate this and I’m sure the other companies probably did too. So everything that went out in these vials, a percentage up to 50 percent, were allowed to be undeclared.”

Of course, the biggest takeaway there is that governments around the world allowed Pfizer to inject their people with an unknown substance.

“Every researcher, geneticist, and molecular biologist that worked on this project would have known that any mRNAs that are injected have reverse transcriptase, which has the potential to turn into deoxyribonucleic Acid (DNA). Then, it will change the genes of whoever took that injection,” Nagase said.

He further warned that a whole bunch of people might start getting unusual cancers because their DNA had been changed. But that’s only part of the problem.

The scientist explained that genes can get spliced into introns, which are the DNA parts that are kept for reference and not used. A child, even though the mother was injected, might grow up to be a perfectly healthy and beautiful adult.

“But there’s something hidden inside an intron, which is like the references of their DNA. And if spike protein gene is there hiding and that the beautiful adult goes on and has kids, the genes from two, three generations ago may reawaken,” Nagase explained. (Related: Could mRNA vaccines permanently alter DNA? Recent science suggests they might.)

He added that technology and science might not be able to stop passing the poisoned DNA to the next or future generations. It might be possible, but could entail a very tedious process.

“A segment of every DNA needs to be pulled out of every cell of someone’s body. That’s too much a scale of technology. And the thing is, if that spike protein gene is hiding in an unexpressed segment of DNA, that person will look act and feel entirely normal,” he said.

Undeclared half of mRNA vaccines may be causing miscarriages and stillbirths

Elsewhere in the show, Nagase said Big Pharma companies that manufacture mRNA vaccines probably know that the undeclared half are proteins that cause women to be infertile.

“A Moderna production engineer claimed that there were two separate ovarian proteins associated with ovarian failure added to the ‘mRNA cocktail‘ that’s been given in these injections,” Nagase told Ruby.

He said that about five billion people on this planet have taken the COVID vaccines and half of those are women.

“Statistically, half of two and a half billion women are capable of becoming mothers and we know from Pfizer post-marketing survey latest releases that the miscarriage and stillbirth rates were up to 90 percent.”

The sad part, Nagase said, is that obstetricians and doctors console mothers who lost their babies and tell them that “it’s just bad luck and miscarriages happen all the time. It’s nothing unusual.”

“The medical community has been a big part of normalizing the rate of miscarriages that if there’s all of a sudden, a sudden increase in miscarriages, the health workers would just think ‘this is usual.’ But if you took it on a community scale, it is no longer usual and there’s been a lot,” Nagase pointed out.

Watch the full June 17 episode of the “Dr. Jane Ruby Show” below.