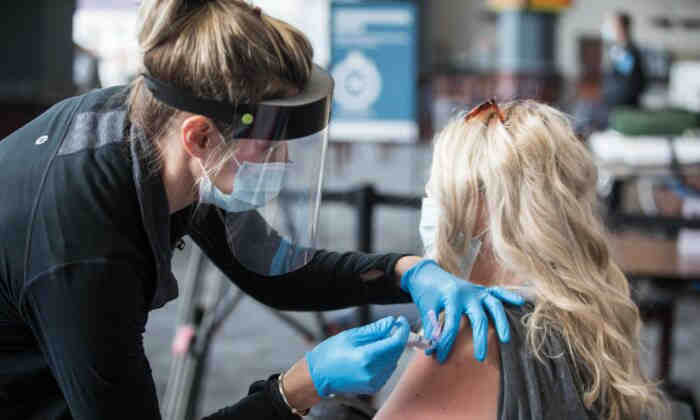 Share to the world...
Source Link: https://www.theepochtimes.com/massachusetts-state-troopers-fired-for-not-complying-with-vaccine-mandate_4394820.html/?utm_source=partner&utm_campaign=TheLibertyDaily
By Jack Phillips

A dozen Massachusetts State Troopers were fired on April 8 for refusing to comply with the state’s COVID-19 vaccine mandate, despite cases and hospitalizations drastically dropping across the state in recent months.

A spokesperson for the Massachusetts State Police told local media that 11 troopers and one sergeant were fired for not complying with Gov. Charlie Baker’s mandate. They were let go after an internal hearing process, said State Police spokesman David Procopio.

Baker signed an executive order in August 2021 mandating all executive branch employees, which includes the State Police, to provide proof of vaccination by Oct. 17. The order allowed only “limited exemptions from the vaccination requirement where a reasonable accommodation can be reached” for a worker on medical or religious grounds.

“They didn’t just terminate them,” Keohan added to the paper, “they eliminated their livelihood.”

“Governor Baker has proven yet again just how hypocritical he is,” SPAM also wrote on Facebook on April 8. “As part of a Friday night news dump, he has just terminated at least 12 Troopers due to his vaccine mandate. No appeals. No due process. Just a Governor hell-bent on breaking the backs of the State Police who work tirelessly each day to keep the Commonwealth safe.”

The union also noted that Baker has started to adopt a more relaxed approach to COVID-19 as cases and hospitalizations have dropped.

“While he closes COVID testing sites, asked that the State House be reopen[ed] without a mandate and has generally shown that we are in the endemic phase of COVID-19, he is still insisting on firing at least 12 Troopers from an already short staffed department,” its statement continued. “The Troopers deserve better. The Commonwealth deserves better. And, Charlie Baker should be ashamed.”

It comes as a growing number of states have moved to change how they report on COVID-19 cases and hospitalizations. In New Hampshire, the state Department of Health and Human Services said last week that it now defines a COVID-19 hospitalization to include patients who are being treated with either dexamethasone or remdesivir.

COVID-19 is the illness caused by the CCP (Chinese Communist Party) virus.

The Epoch Times has contacted Baker’s office for comment.