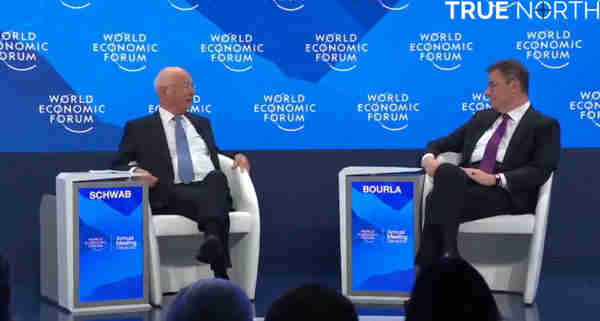 Share to the world...
Source Link: https://beckernews.com/klaus-schwab-pfizer-ceo-scold-critics-as-conspiracy-people-at-secretive-gathering-of-world-elites-at-davos-45110/
by Kyle Becker Poor Klaus Schwab. The World Economic Forum CEO’s secretive gathering of globalist elites at Davos, Switzerland appears to be igniting ‘conspiracy theories’ again. What is the mastermind behind “The Great Reset” to do?

On Wednesday, Schwab and Pfizer’s multi-millionaire CEO Albert Bourla lamented that the little people don’t much like what the scheming elitists are up to at Davos. Watch:

“With a vaccine that we knew that there is a very fanatic group of anti-vaxxers that will go after us no matter what, they will claim that the sun didn’t go up because people were vaccinated and that created issues with the crop,” Bourla said. “So I’m suing you.”

“And one thing it is to sue you in the us,” he went on. “Another thing is to sue you in a country where the legal system is not up to the standards… in Switzerland. So I think that’s behind us, everything went okay. And now I think we can move on.”

“I think we were, we were both targets of the anti-vaccine movements and conspiracy people claiming that I had tripled — I wondered what it is — ‘triple COVID,’ yeah… well was I think you got hundreds of thousands of clicks and so on.”

As a sidenote, it’s interesting that Schwab appears to complain about my satirical Twitter post on him getting “triple Covid,” which I noted at the time was written in jest. “Yeah,” Bourla responded. “Same happened to me. And there are pictures, pictures of me and the FBI officer. I don’t know how. It never said. The surprising thing, it is that the same publication, I found out… had published, the previous one arrested was the Pope by FBI.”

“So ridiculous,” Schwab added. “So we are in good company.”

Apparently, the FBI arrest report that Bourla was complaining about was published by the obscure publication the Conservative Beaver. It was ‘fact checked‘ by left-wing editorialists at Politifact.

“Pfizer CEO Albert Bourla was arrested at his home in the affluent suburb of Scarsdale, New York Friday morning by the FBI and charged with multiple counts of fraud,” the post said. “Bourla is being held while he awaits a bail hearing.”

“This post was flagged as part of Facebook’s efforts to combat false news and misinformation on its News Feed,” Politifact noted.

The serious part: Obvious satire is being flagged by ‘fact checkers’ in cahoots with Big Tech platforms, especially when posts mock or ridicule public figures that the elites want to protect.

The Department of Homeland Security’s Disinformation Governance Board, also known as the Ministry of Truth for its Orwellian overtones, was recently disbanded, but the same drive to root out inconvenient counterfactuals and pointed criticism on social media remains.

The World Economic Forum in June 2021, for example, discussed using advanced technology to detect the spread of ‘misinformation’ (or inconvenient news, satire, and criticism) and to combat it.

“Defending against disinformation is not only a matter of national security, but also about protecting democracy,” said Edward Kao, a member of an MIT research team that is investigating AI for disinformation.

While Klaus Schwab can lament public ‘conspiracies’ about his worldview, we actually have the written text that lays it out in great detail: “Covid-19: The Great Reset.”

The World Economic Forum openly describes “The Great Reset” as “a unique window of opportunity to shape the recovery.” It adds about taking political advantage of the Covid response crisis as a way to determine “the future state of global relations, the direction of national economies, the priorities of societies, [and] the nature of business models and the management of a global commons.”

That’s not exactly subtle. We are also talking about a World Economic Forum with no shortage of national leaders that attend the annual forum at Davos or are otherwise are part of its informal Young Global Leaders club.

“When I mention names like Ms. Merkel, even Vladimir Putin and so on, they have all been Young Global Leaders of the World Economic Forum. But what we are really proud of now is the young generation, like Prime Minister Trudeau, President of Argentina and so on,” he claimed.

Schwab also boasted about “penetrating cabinets.” This is conspiratorial language in-and-of-itself without question.

However, Vladimir Putin was since “canceled” as being in good standing with the World Economic Forum in the aftermath of his invasion into Eastern Europe.

Hillary Clinton, former Secretary of State and failed 2016 presidential candidate, appeared on “Meet the Press” in April. During the course of the interview, host Chuck Todd asked Clinton if Russia should be “let back into the New World Order.” Watch:

“You heard Secretary [of State] Blinken essentially say, ‘look, sanctions relief could happen’,” Todd said. “It all depends on the behavior of Russia. Can we really live in a world where Putin’s let back into the New World Order?”

“I would not allow Russia back into the organizations that it has been a part of,” Clinton responded. “I think there’s an upcoming G20 event later in the year. I would not permit Russia to attend, and if they insisted on literally showing up, I would hope there would be a significant if not total boycott.”

But one of the most concerning incidents revolving around the World Economic Forum’s annual summit is an apparent WEF ‘police force’ that detained Human Events senior editor Jack Posobiec.

But despite the badges on the MP5-toting militia members’ arms, the editor was ‘fact checked’ by editors claiming the WEF technically has no such thing. The ‘fact check’ is based on a denial by Swiss authorities.

“The WEF organization does not have a police force,” the Swiss police spokesperson said.

“The security forces deployed are identified by official uniforms, identity cards, as well as police patches. This was also the case when the journalist was checked. The WEF police badge is an additional badge created by the security forces themselves, which is redesigned every year.”

But in that case, was Posobiec unlawfully detained by the WEF’s armed militia group? Why didn’t the Swiss authorities intervene with the World Economic Forum’s unlawful violation of Posobiec’s human rights, such as freedom of movement?

The fact is that the World Economic Forum, as well as the World Health Organization, are undermining state sovereignty and threatening human rights. It is well past time for journalists to recognize this existential threat to citizens’ safety and security, and urge their representatives to reject the usurpation of those authorities granted to their representative governments and to those governments alone.