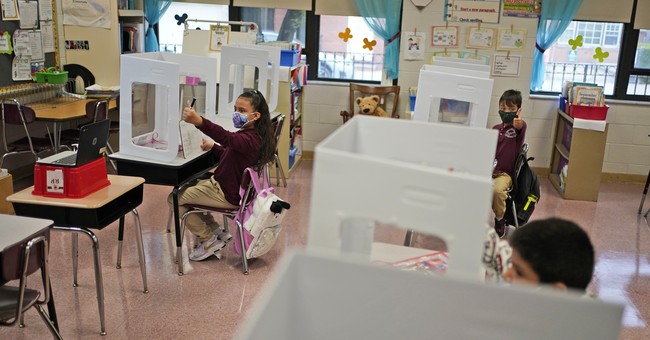 They were elementary and homemade at first before becoming commercialized and mass-produced, but plastic dividers became as commonplace during the Wuhan coronavirus pandemic as the paper masks that now litter city streets.

Put up with the aim of blocking droplets from the noses and mouths of the COVID-infected among us, they became a sort of virtue signal for businesses to show that they cared about the safety of their customers and employees. Plastic dividers popped up to separate Uber drivers from their passengers, supermarket cashiers from customers, students from teachers, and virtually every place there used to be unimpeded face-to-face interactions.

Now that we’ve had more than a year of life peering through plastic at our fellow citizens, the science is starting to catch up with the craze and it turns out those measures may have actually increased the chances of people contracting the Wuhan coronavirus.

As The New York Times recently reported, “scientists who study aerosols, air flow and ventilation say that much of the time, the barriers don’t help and probably give people a false sense of security. And sometimes the barries can make things worse.”

How is that possible, you may ask, that one of the most prevalent forms of COVID theater aimed at preventing the spread of COVID was actually doing more harm than good? The Times explains:

Under normal conditions in stores, classrooms and offices, exhaled breath particles disperse, carried by air currents and, depending on the ventilation system, are replaced by fresh air roughly every 15 to 30 minutes. But erecting plastic barriers can change air flow in a room, disrupt normal ventilation and create “dead zones,” where viral aerosol particles can build up and become highly concentrated.

The New York Times admits that in some situations, such as a person sneezing or coughing, a plastic barrier can prevent large droplets from making direct contact with another person. But because the Wuhan coronavirus “spreads largely through unseen aerosol particles” barriers typically trap such aerosols until they’re so concentrated they end up spreading beyond the clear walls aimed at keeping them in.

And there are studies to back up the theory that our supposedly impenetrable plastic walls did more harm than good, as The New York Times reports:

A study published in June and led by researchers from Johns Hopkins, for example, showed that desk screens in classrooms were associated with an increased risk of coronavirus infection. In a Massachusetts school district, researchers found that plexiglass dividers with side walls in the main office were impeding air flow. A study looking at schools in Georgia found that desk barriers had little effect on the spread of the coronavirus compared with ventilation improvements and masking.

Before the pandemic, a study published in 2014 found that office cubicle dividers were among the factors that may have contributed to disease transmission during a tuberculosis outbreak in Australia.

British researchers have conducted modeling studies simulating what happens when a person on one side of a barrier — like a customer in a store — exhales particles while speaking or coughing under various ventilation conditions. The screen is more effective when the person coughs, because the larger particles have greater momentum and hit the barrier. But when a person speaks, the screen doesn’t trap the exhaled particles — which just float around it. While the store clerk may avoid an immediate and direct hit, the particles are still in the room, posing a risk to the clerk and others who may inhale the contaminated air.

So while, in theory at least, the plastic dividers that have become a trademark of society’s fear of invisible COVID particles should work, they don’t always protect people and can even make the situation worse.

According to experts interviewed by The New York Times, the problem “is that most people in charge of erecting barriers in offices, restaurants, nail salons and schools are not doing so with the assistance of engineering experts who can evaluate air flow and ventilation for each room.”

As The Times concludes, whether due to improper installation or a misunderstanding of air flow, those plastic walls “most of the time… do little to stop the spread of the coronavirus.”