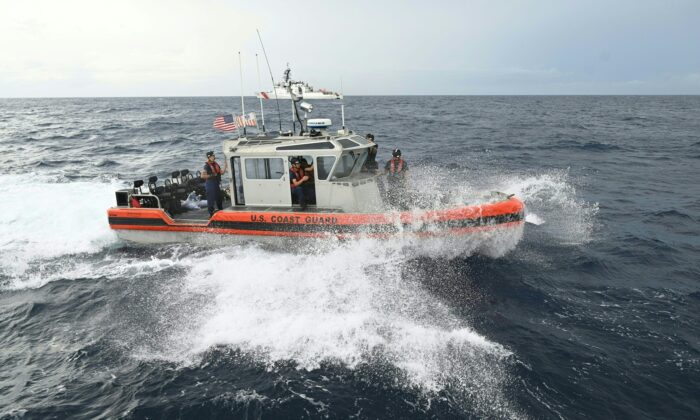 Newly published images show the digital tool that the U.S. Coast Guard has been utilizing to swiftly deny requests for exemptions from its COVID-19 vaccine mandate.

The five screenshots of the tool show how the Coast Guard has been violating the rights of service members who have legitimate reasons for requesting an exemption but have had their requests denied, lawyers, lawmakers, and members say.

The digital tool, known as the Religious Accommodations Appeal Generator (RAAG), enables Coast Guard officials to select from a pre-populated list of 25 reasons a request is submitted and quickly produce a document denying a request.

Reasons include the risk of death from COVID-19 being minimal, how vaccines don’t work well or at all against infection, and having duties that do not bring a member into contact with the public.

The tool “indicates that the adjudication process for exemption applications was a pro forma exercise designed to reach predetermined conclusions—to deny requests and appeals—in nearly every single case,” Republican lawmakers said in an October letter to the Coast Guard.

The letter did not include the images. They were obtained by The Epoch Times from a source and attached recently to a filing in a court case lodged by more than 130 Coast Guard members that alleges the vaccine mandate violates the U.S. Constitution and the Religious Freedom Restoration Act (RFRA), which prohibits the government from “substantially burden[ing] a person’s exercise of religion” by imposing pressure on a person to “modify his behavior and to violate his beliefs.”

Denial letters used the same “magic words” without the individualized treatment required by the RFRA, according to the complaint.

The images from the digital tool confirm the allegations, lawyers representing members said in the recent filing.


“In sum, just as Plaintiffs have alleged all along, the Coast Guard has engaged in a coordinated and digitally designed and supported campaign to willfully violate the rights of servicemembers under both RFRA and the establishment clause of the U.S. Constitution,” they said. “This is as clear-cut an example of willful discrimination as there has likely ever been presented showing that Defendant’s never intended to grant a single Religious Accommodation.”

Lawyers not involved in the case agreed.

“It appears that Coast Guard leadership decided to intentionally ignore the Religious Freedom Restoration Act,” Davis Younts, one of the lawyers, told The Epoch Times in an email. “Military leaders that decide to ignore the law are failing to uphold their oath to support and defend the Constitution.”

Younts said it was important to keep in mind that the Coast Guard has also created a guide for chaplains who interview members seeking religious accommodation that instructs the chaplains to ask questions that are designed “to manipulate the service member seeking an accommodation into discussing politics rather than religion and then using that prompted discussion as an excuse to find the request for an accommodation was not sincere.”


As of Sept. 23, the Coast Guard has approved just 12 religious exemption requests and denied another 1,231.

Plaintiffs in the case said the only approvals that have been given were to members set to leave the service.

The Coast Guard, asked about the tool, said that it is following the law.

“The Coast Guard takes its obligations to review and carefully consider each religious accommodation request filed by one of our members seriously. Every request received individualized review and analysis in accordance with law and Coast Guard policy,” a spokesperson told The Epoch Times via email.

Lt. Chad Coppin, one of the plaintiffs in the case, said the tool and another document recently made public show the Coast Guard is lying.

That document contains language that officials can quickly plug into denials for members in certain positions, such as members serving on small cutters.

Coppin inspects ships but officials used language that referred to him serving on board a ship. “In your current assignment … your duties … require you to operate within an enclosed quarters for extended periods while in close proximity to your shipmates,” the denial letter, reviewed by The Epoch Times states.

“They literally used wording that was supposed to be used for a Coast Guard small boat station, and I’m prevention officer,” Coppin told The Epoch Times. “To me, the whole thing is a sham.”

Coppin said members were told by superiors that each exemption request would receive an individualized assessment but the newly obtained documents rebut that claim.

“Looks to me more like they’re just trying to plug and play pre-canned responses. And they didn’t even do enough due diligence to make sure that they got my unit correct,” he said.

Since the case was filed in July, some plaintiffs have been discharged, including Petty Officer Third Class Timothy Jordan, whose wife was 8 months pregnant at the time. Lawyers asked for a temporary restraining order to prevent the Coast Guard from discharging any more plaintiffs. U.S. District Judge Jeffrey Brown, the Trump appointee overseeing the case, ordered the parties on Oct. 27 to enter mediation. He wants them to come to an agreement similar to that reached in a separate case brought by Coast Guard personnel. The agreement saw the Coast Guard agree to stop discharge proceedings against plaintiffs.

J.M. Phelps contributed to this report.