TEXAS (LifeSiteNews) – Web domain hosting giant GoDaddy is deplatforming a website run by Texas Right to Life through which people can submit tips about violations of the Lone Star State’s robust new pro-life law that protects babies with beating hearts from being aborted.

A GoDaddy spokesman said in an email to the New York Times and The Verge, “We have informed prolifewhistleblower.com they have 24 hours to move to another provider for violating our terms of service.”

“Too bad for the mob: We will not be silenced,” Texas Right to Life responded. “Anti-Lifers hate us because we’re winning. We’re transferring our assets to another provider and will have the site restored within 24-48 hours. Come back soon.” 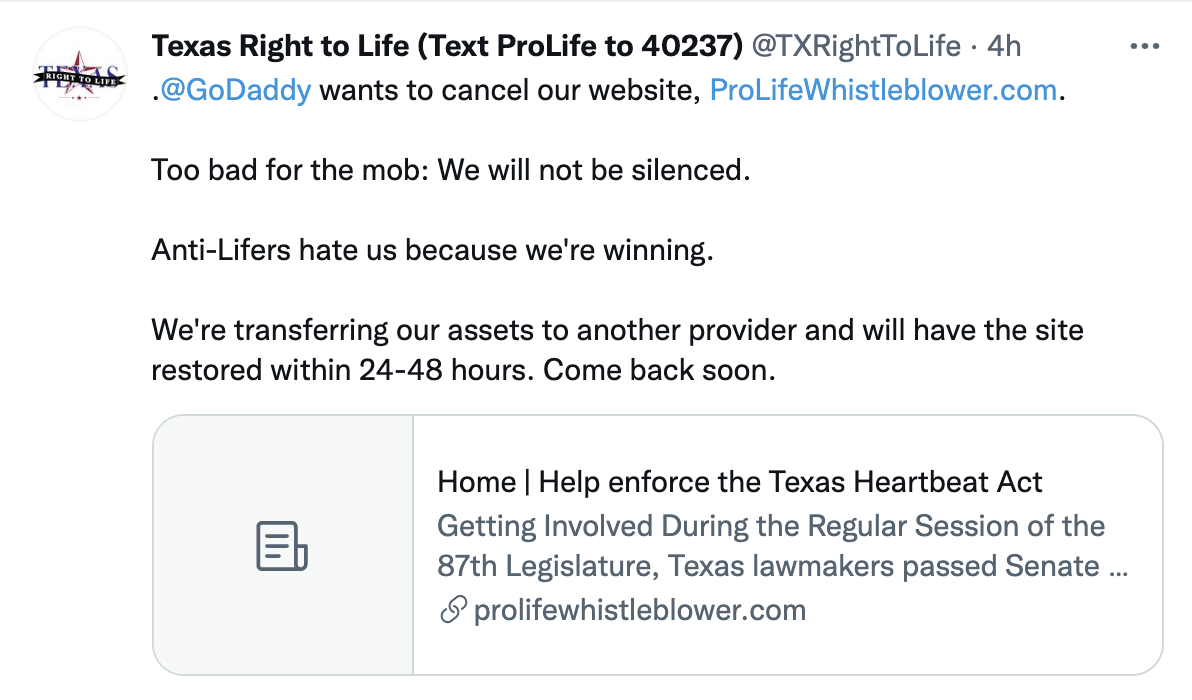 Since the Texas Heartbeat Act came into effect on Wednesday, TikTok users and coders have flooded prolifewhistleblower.com, which is run by Texas Right to Life, with fake tips. Trolls have claimed that Republican Gov. Greg Abbott was in violation of the law, and have submitted claims about fictional characters from comic books.

There has been widespread pro-abortion panic after the U.S. Supreme Court allowed the law, which lets private citizens sue abortionists or anyone aiding or abetting the abortion of a baby with a beating heart, to go into effect this week. The Supreme Court’s refusal to block the law has effectively ended all abortions after six weeks in America’s second-largest and second-most populous state.

“Judge Maya Guerra Gamble’s (D) ruling does not invalidate the new law but rather halts Texas Right to Life and its associates from suing abortion providers and workers at Planned Parenthood clinics under the statute, S.B. 8, that took effect Wednesday,” The Hill explained.

The narrow, temporary ruling does not prevent other Texas citizens from suing those who commit or aid in an abortion, though.

Ryan T. Anderson, president of the Ethics and Public Policy Center, noted in a Twitter thread that backlash from corporate America over the new law is reminiscent of what has happened to other states after enacting or attempting to enact common-sense socially conservative legislation.

He said, “Remember when corporate America did to Indiana over RFRA? Or North Carolina on bathrooms? Or a host of states on transgender ‘medicine’ and sports? Expect to see them attempt to do the same to prolife states in a post-Roe world. They’re already trying to do it to Texas.”

Over the past year there has been a massive uptick in Big Tech censorship of conservative voices, from the famous banning of now-former President Donald Trump from Twitter and Facebook to censorship of lockdown critics and vaccine skeptics.

Interview: Pro-life attorney explains the Texas abortion win, and what comes next

Texas law means more people with Down syndrome will be allowed to live, leftist scholar frets