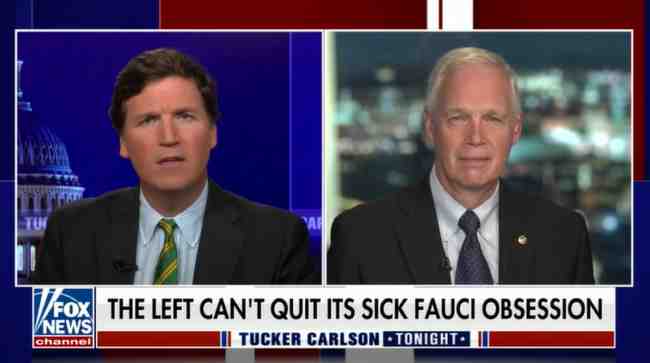 “These mandates are driven by the bait and switch of the FDA that we now have an approved vaccine. We do not have an approved vaccine in America,” Johnson said Monday on Tucker Carlson Tonight. “They did it for the Comirnaty – it’s available, I guess, in Europe, but the Pfizer vaccine available in the U.S. is not FDA-approved – it’s got an emergency use authorization (EUA).”

The Republican senator added that he sent a letter to the FDA days after the agency approved the Pfizer COVID vaccine branded as Comirnaty, which is “legally distinct” from Pfizer’s jab that remains under EUA in the United States, according to the FDA.

An FDA fact sheet for the Pfizer-BioNTech vaccine released in August described the two jabs as “legally distinct with certain differences that do not impact safety or effectiveness” and said the vaccines “can be used interchangeably.”

Pfizer representatives have said that those distinctions refer to manufacturing differences, like the use of different sites or materials from different suppliers, though not formulation.

“There is no doubt that the FDA’s action will lead to more vaccine mandates and increased pressure on those currently choosing not to get vaccinated,” Sen. Johnson stated in his letter to FDA chief Janet Woodcock, dated August 26.

“Is there sufficient supply in the U.S. of the Comirnaty vaccine to ensure that those being vaccinated under mandates will be receiving the FDA-approved version? Or is it more likely (or certain) that they will be vaccinated using the vaccine administered under the reissued EUA?”

“I look forward to receiving a response to this limited number of questions no later than August 30, 2021,” he told Woodcock. “Your answers are crucial to Americans who will now be forced into making potentially life-altering decisions in response to the employer, military and educational mandates that your August 23, 2021 letters have triggered.”

“If there is insufficient supply of Comirnaty vaccines for those succumbing to the coercion of mandates, isn’t the FDA de facto endorsing vaccine mandates utilizing EUA vaccines?”

Johnson told Tucker Carlson that the FDA has still not responded to his questions. “Why are they basically lying to the American public? That’s a serious question to be asked,” he said, adding that “we are destroying our health care system with these [vaccine] mandates.”

The Biden administration has repeatedly used the FDA’s approval of Comirnaty to push mandatory COVID-19 vaccination.

“Of the nearly 80 million eligible Americans who have not gotten vaccinated, many said they were waiting for approval from the Food and Drug Administration — the FDA.  Well, last month, the FDA granted that approval,” Joe Biden said in an announcement last month of vaccine mandates for all federal workers and for large private businesses.

“So, the time for waiting is over.”