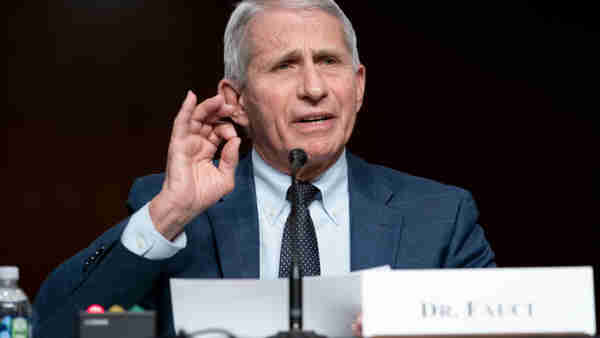 Share to the world...
Source Link: https://www.dailywire.com/news/fauci-collins-shared-in-secret-nih-royalties-totaling-350m-watchdog-report
By  Greg Wilson
May 10, 2022   DailyWire.com

Anthony Fauci, Francis Collins and other bigwigs at the National Institutes of Health reaped more than $350 million in secretive “royalty” payments from drug companies and other third parties over a 10-year period, according to an explosive new report from a watchdog organization.

The report from OpenTheBooks.com said the royalty payments, including at least 23 to Fauci and 14 to his former boss, Collins, were paid out between 2010 and 2020. Government scientists got the payments for being credited as “co-inventors” of various treatments and pharmaceutical products, according to the report.

“Because those payments enrich the agency and its scientists, each and every royalty payment could be a potential conflict of interest and needs disclosure,” OpenTheBooks.com co-founder and CEO Adam Andrzejewski wrote. “NIH is a revolving door of tens of billions of dollars in government grant-making coupled with hundreds of millions of dollars in private – non-transparent – royalty payments.”

The report paints an incestuous picture of the NIH doling out $30 billion a year in grants to some 56,000 recipients in Big Pharma, research institutes and other entities, with money flowing back to the secretive agency’s scientists and senior management in the form of huge royalty payments. It is not yet known how much the payments to Fauci, who is the U.S. government highest-salaried employee at $456,028, totaled.

“Since the NIH documents are heavily redacted, we can only see how many payments each scientist received, and, separately, the aggregate dollars per NIH agency,” Andrzejewski wrote.” This is a gatekeeping at odds with the spirit and perhaps the letter of open-records laws.”

In addition to his salary and whatever royalty payments he has received, Fauci last year won a $1 million prize from the Dan David Foundation for “speaking truth to power.”

Collins resigned as NIH director in December after leading the agency for 12 years. Fauci is the longtime head of NIH’s National Institute for Allergies and Infectious Diseases (NIAID), and also serves as chief medical adviser to President Joe Biden.

OpenTheBooks.com made the $350 million estimate by extrapolating from documents received as part of a federal lawsuit against NIH. So far, the group has uncovered evidence of more than 22,100 royalty payments totaling nearly $134 million paid from 2009-2014 to 1,700 NIH scientists. The group is awaiting another 1,800 pages of royalty disclosures which would cover the period from 2015-2020.

The NIH has resisted turning over information, treating the royalty payments like “a state secret,” according to Andrzejewski. The agency ignored OpenTheBooks.com’s Freedom of Information Act request, forcing the group to go to court with Judicial Watch, he said. Once in court, the NIH slow-walked production of documents it was ordered to hand over, and redacted key information, he said.

Under court order, the NIH has agreed to produce 300 pages a month, but insisted on producing documents related to Fauci last – sometime in November, according to Tom Fitton, president of Judicial Watch.

The Associated Press reported on the NIH’s royalty database and found 900 scientists collected nearly $9 million in royalties 16 years ago. That report also determined some 51 NIH scientists who were paid royalties worked on experiments involving inventions for which they were already being paid. Among them was Fauci, who received $45,072.82 between 1997 and 2004 for a patent license on an experimental AIDS treatment that was funded with a $36 million NIH grant.

But Andrzejewski said the agency has become “a lot more secretive” since the AP report.

“When a federal bureaucrat pops up on television giving us health instructions, who has paid them and for what research and technology?” Andrzejewski asked. “When a patient agrees to a clinical trial or experimental treatment, what financial interests are involved?”