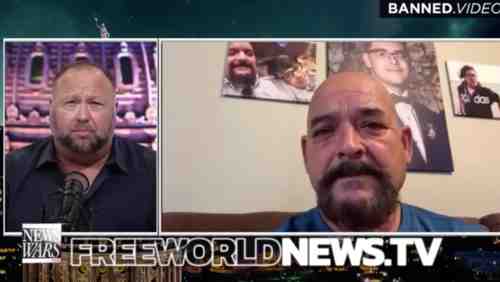 Big Tech trying to silence family members who lost loved ones to the COVID injection.

Image Credit:
Infowars.com
Ernest Ramirez, a grieving father who lost his son to the COVID injection, was censored by Facebook over the weekend following his interview with Alex Jones.

Ramirez had tried to share a speech he gave from the Austin capitol, but was blocked by Facebook for 24 hours.

This comes after Ramirez appeared on The Alex Jones Show on Saturday to explain how his son Ernest Ramirez Jr. succumbed to heart inflammation five days after taking the Moderna injection.

The media has been trying to bury these testimonies despite the fact a U.S. study found teenage boys are 14 times more likely to suffer heart inflammation after taking the COVID shot.

In fact, cases of myocarditis have exploded in the Western World since the shot was approved for 12-15 year-olds in May.

This is just another example of the media and Big Tech’s grim efforts to silence and censor anyone who speaks out against the COVID vaccine, even if those individuals lost loved ones as a result of adverse reactions to the shot.