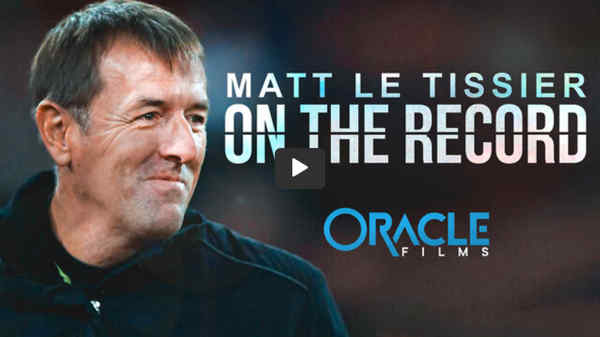 Matt Le Tissier felt a responsibility to speak out after a 5-fold increase in sudden cardiac and unexplained deaths among FIFA players in 2021.

British soccer legend and sports commentator Matt Le Tissier spoke out during an interview with Oracle films about the disturbing amount of athletes who have recently collapsed or died on the playing field. He had never seen anything like it in the 17 years he had played the sport.

The famous athlete is calling for an investigation into the cause of athletes failing health, most of whom have received the Covid “vaccines.” Matt Le Tissier felt a responsibility to speak out after a 5-fold increase in sudden cardiac and unexplained deaths among FIFA players in 2021. He accused leaders who ignore this disturbing phenomenon of “gross dereliction of duty.”

Le Tissier believes that fact-checkers and government officials seek to negate or discredit information supporting the theory that the mRNA injections are behind the sudden onslaught of injuries and deaths.

Persecuted for Questioning the ‘Vaccine’

Le Tissier was a UK soccer legend who had a 17-year playing career with the Southampton Football Club. His skills on the field earned him the nickname ‘Le God’ before he left the sport and became a sports commentator, most recently with Sky Sports.

As he describes in the interview, he lost that job for speaking out and drawing attention to the large numbers of unexplained sudden cardiac deaths among professional and amateur athletes worldwide. However, he has no regrets and feels it is more important to stand up for what is right than to cower to authority.
And that was more important to me than if I keep the job or not. And if you ask me if I would do the same thing again, knowing the consequences, I definitely would.
The soccer legend struck back at the Daily Mail paper and other left-wing media outlets who smeared him and other citizens for questioning the “controversial “vaccines,”
It’s a really sad way to go about making a living. And there are some journalists who really, really must struggle when they put their head on their pillow at night. They must struggle to get themselves to sleep. And let me tell you this, I go to sleep every night when my head hits the pillow. I’m a very contented man and I go to sleep very, very well, thank you very much.”

With each passing day, the list of people suffering the tragic consequences of the Covid mRNA vaccination, specifically myocarditis, grows longer. In addition, Le Tissier was asked to comment on the rise of heart problems in athletes.
I have never experienced something like that. I played for 17 years. I don’t think in 17 years I’ve seen a person walk off with breathing difficulties, palpitations or heart problems…

In the last year it’s just amazing how many people, not just footballers but athletes in general, tennis players, cricketers, basketball players, how many just keel over. And at some point you just have to say that this is not okay and needs to be investigated.
Le Tissier acknowledges that there may be other factors that have caused this massive increase in cardiac events in athletes. He points out that the athletes may have contracted COVID, which could be a result of the disease or the vaccine. However, he points out that this should be investigated, which has not been the case. On the contrary, those who call for an investigation are persecuted.

The soccer legend has been labeled an “anti-vaxxer” for his views on the experimental gene therapies.Le Tissier struck back at the establishment’s label, stating,
Matt Le Tissier had all of his vaccinations up until this one – so if that means I’m an Anti-vaxxer, that seems a little bit odd given all the vaccinations I could possibly have had in my life. I’ve had probably 99% of them.

So, if not choosing to have one, that by the way – a lot of people don’t realize this, but they’ve had to change the definition of what a vaccine was, for this mRNA gene therapy to be called a vaccine…

Le Tissier explains that professional sports leagues protect athletes from playing too long or too many games. Yet, they watch players collapse on the field and seem comfortable with it, even pretending it’s normal. He calls it a “massive dereliction of duty” that no one in a leadership position is demanding an investigation,
It is absolutely disgusting that they sit and do nothing about the increasing number of athletes collapsing on the field. And that’s not just what I’ve observed this season. I can’t recall a single game in my career being abandoned because of a crowd emergency, a crowd medical emergency…

I wish someone would look at this and say, wait a minute, can we go back the last 15 or 20 years and … look at how many times that happened 10 years ago and how many times it happened in the last year. I’ve watched a lot of sports and a lot of coverage of football, and I’ve never seen so many games interrupted due to crowd emergencies.
Le Tissier is calling upon celebrities to speak out peacefully because when influential people speak out, more people will listen,
Hi, I’m Matt Le Tissier, and I’m calling on all celebrities, people of profile, who know that something’s not quite right that haven’t said anything – please, don’t be afraid, come out and say what you think, because sometimes you need to put your head above the parapet for the greater good.
Watch the full interview with Matt Le Tisser: