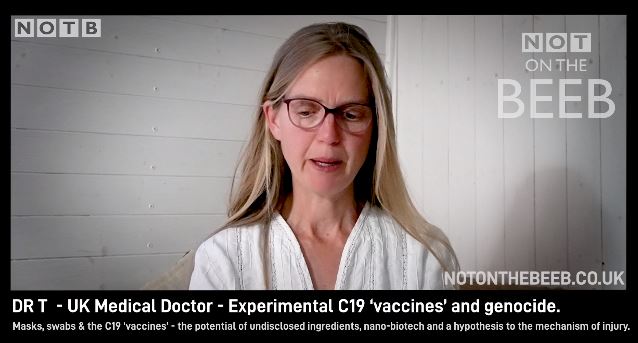 I am sharing the following hypothesis urgently of how the Covid-19 experimental injections may be harming and killing in the hope that it may be able to help in some way to help stop this attempted mass genocide.

I do not believe this is an accident and I will explain why.

My hypothesis is that the experimental mRNA Covid-19 injections contain a magnetised nano particle attached to the mRNA which crosses the blood-brain barrier and is then attracted to the brain, particularly mid-line structures.

I further hypothesize that two things aid this passage of the magnetised mRNA to the brain: local temperature effects from EMF radiation and from an artificial network such as from hydrogel.I will now explain why I am proposing this hypothesis

.Since April/May 2021 thousands of reports around the World have emerged of people who have been injected with the Pfizer BioNTech or Moderna Covid-19 experimental injections who are now finding that a specific area where they were injected in their arm has become magnetic.

1.It appears that people who have had two injections have a higher tendency towards stronger magnetism than those who have had one.

2.The effect seems to be extremely localised and strongest in the first weeks after the injection and after this time the effect can change from an area of  a few centimetres to 10-20cms and in a few documented rare cases to affect other parts of the body.

Some people can feel that pull within their body when the magnet is sticking. Some individuals, more common in those who have had 2 injections, are magnetic enough that metal objects will stick to their arms and stay there. I have seen this personally and my understanding is that there are cases of objects as large as cutlery sticking where the patients have attended hospital for investigation.

4 .Body types seem to vary in how easy it is to pick up this magnetism from the skin.

This may be due to a different dispersal pattern, different uptake or purely due to more layers of fat running between the possibly magnetised muscle and the testing magnet. Those with more superficial fat (as opposed to muscle bulk) in their arms appear to have weaker magnetism compared to very slim people .4

.A possible correlation with recent Flu vaccinations. Notably some people who have had the Pfizer injection after being vaccinated against flu in the same autumn/winter season have stronger magnetism and those who have never had the flu vaccination having no detectable magnetism few months after the Pfizer injection.The numbers I have been able to look at personally on this are very small, however it warrants further investigation.It is relevant at this point to note there has been widespread discrediting of this magnetism from many main stream news sources from the BBC to Reuters.

The people effected by this phenomenon being “fact-checked” and called “fakes”.It is also of note that the listed ingredients do not include any metals or magnetic particles.However, this magnetic nano-technology does exist and extensive studies in animals and cells in vitro have taken place over the last 5 years.

(1).Information in the public domain shows that Pfizer BioNTech and Moderna both used an S2 spike protein during their manufacture made by Acrobiosystems and they show a diagram of the mRNA with a magnetised nano-particle on one end that was used in the development of the Pfizer vaccine. (2)(3)(4)

It appears that by some means some magnetic property may have been transferred into the body with the mRNA injections.

I hypothesise this magnetised mRNA is crossing the blood-brain barrier and causing harm there for a number of reasons. Firstly, reviewing the passive data bases from the Yellow Card System, Eurovigillance and VAERS with respect to Covid-19 experimental vaccines a number of side effects are extremely common.

One example is Bell’s Palsy. This is where there is a paralysis of the facial nerve that causes weakness and drooping on one side of the face.

Just in the UK on the yellow card system on the 2nd June 2021 there are 661 cases of Bell’s palsy, 437 cases of Facial paralysis and 173 of facial paresis.It is of note that many other side effects that have been reported after the vaccines include cranial nerves that emerge from the deep midline structures of the brain, in particular the brain stem.Cranial Nerve

1. Olfactory. Damage to this affects sense of smell.Cranial Nerve

3. Oculomotor. Damage to this affects the eyelids, pupils and the lens  ie focusing of the eye.Cranial Nerve

4. Trochlear. Damage to this affects looking down and towards the nose.Cranial Nerve

5. Trigeminal. Damage to this affects touch pain and temperature sensation on the face as well as chewing.Cranial Nerve

7. Facial. Damage to this affects facial expression, lip movements, taste towards the tip of the tongue, as well as tear and saliva secretion.Cranial Nerve

8. Vestibulocochlear. Damage to this affects hearing and balance.Cranial Nerve

9. Glossopharyngeal. Damage to this affects taste at the back of the tongue, the gag reflex, swallowing and some aspects of speech.Cranial Nerve

10. Vagus. Damage to this affects the muscles inside the organs such as the heart, lungs, intestines.Cranial Nerve

Damage to this affects the movement of two large muscles of the neck: trapezius and sternocleidomastoid.Cranial Nerve 12. Hypoglossal. Damage to this affects speech movements of the tongue and swallowing.The 6th, 7th, 9th, 10th and 12th Cranial nerves arise within very close proximity in the brain stem, which sits between the top of the spinal cord and the base of the brain/cerebral cortex.

I would like to highlight in a bit more detail what damage to the Vagus (10th) Cranial Nerve can cause as this nerve has very far-reaching and complex functions. Damage can cause emotional disturbances including anxiety and depression, difficulty with breathing and swallowing and changes in heart rate and blood pressure including leading to fainting/ syncope.

Damage can also affect digestion, with delayed ability to digest food, vomiting and nausea, heartburn and weight loss or gain. Pins and needles (paraesthesia) may be felt at the extremities ie fingers and toes.This leads me onto my hypothesis that low level radiation, from EMF may be directing where this damage takes place. Although the significance of the small temperature increases that take place inside the brain with the use of mobile phones has been debated, there is agreement that a very small temperature rise takes place within the brain with the use of mobile devices.

Many factors will effect how significant this exposure is from skull thickness to how much development is happening in the brain. So children and the elderly may be at more risk. The effects of EMF is not just limited to heat, there are animal and cell studies looking at changes of ion channels, demyelination and autophagy too.

EMF radiation has been listed as a ‘possible carcinogen’ since 2011 by the IARC (The WHO’s International Agency for Research into Cancer). When mobile devices are then connected to the ears either remotely using blu-tooth devices or directly using wired earphones this radiation is directed between the two ears or the external auditory meatus. The centre point between the two ears is the Pons part of the brainstem and from there the 7th Cranial Nerve (facial nerve) originates.

Could it be that this nerve (and other cranial nerves) is being damaged at its origin by EMF interacting with magnetic nanoparticles?Of further concern is that there is emerging evidence that Covid-19 swabs (both PCR and Lateral Flow Swabs) may be contaminated, possibly with hydrogel.

If this is the case then when these swabs are shoved far into someone’s nasopharynx, enough to cause superficial trauma in many cases, that this hydrogel may also be attracted towards these magnetic and electrical fields. The body’s own magnetic sensing gland, the pineal gland is also deep within the brain and it could be that the combination of hydrogel, EMF radiation and magnetised mRNA is a deadly trio that leads to deep brain structures being destroyed. The properties of magnetic hydrogel is also being investigated as this article summarises.(5)These are only hypotheses but they are extremely serious ones. With the further push through of the Covid-19 vaccination programme World wide including now on the children who are at such slight risk from Sars CoV-2 itself compared to adults, how can we allow any further injections to take place without this issue being fully investigated?Sars CoV-2, has been artificially made and causes harm. This makes it a bio weapon. How can we then trust an international pharmaceutical industry that has been involved in whatever way in the making of a bio weapon to then propose the ‘cure’.We must not be blinded because we can’t imagine that people could want to cause harm to others. A very small number of people do, and an even larger number allow and facilitate that harm taking place by being unable to consider that harm could ever be deliberately done.