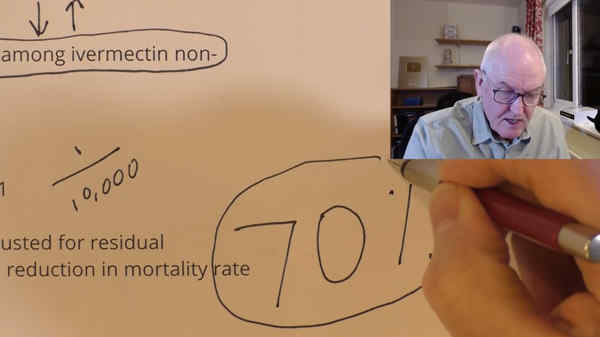 EDITOR:  This section is being written by the editor to provide historical context.  Since early 2020, therapeutic repurposed drugs such as Hydroxychloroquine and Ivermectin were known to be effective against SARS-CoV-2.  America’s Frontline Doctors has dozens of studies that were censored and repressed by the mainstream media and the government (CDC, FDA).  While deadly big-pharma drugs like Remdisivir were given EUAs, and the now exposed COVID vaccines were also given EUAs, Ivermectin never was.  Ivermectin is one of the safest drugs ever invented and there was a systemic effort to stop people from using it including:  hospital networks punishing doctors who used Ivermectin, medical boards investigating doctors and threatening with de-licensing, and even pharmacies refusing to fulfill Ivermectin scripts.  Besides censorship, there was even a mainstream effort to demonize Ivermectin as “horse paste” that is “dangerous”.  Mainstream news created fake news claiming that hospitals were full with Ivermectin poisoning.  It’s now clear that not using Ivermectin (and other similar drugs) as the only reason why anyone died.  The USA could have mass-produced Ivermectin for pennies and distributed it to everyone in the USA which would have stopped SARS-CoV-2 almost overnight.  This actually did happen in India.  Our doctors failed us, our government failed us, our media failed us, our “experts” failed us, and our media failed us.  They didn’t just fail, they all colluded to keep Ivermectin from people who knew that it was far more effective than vaccines, and significantly less dangerous.

Dr. Campbell is a very well respected medical doctor having a significant YouTube following.  He has been highly regarded by the political left and right.  For anyone doubting his numbers, here is a YouTube screenshot demonstrating his 2.5 Million subscriber base.  He has essentially been a vaccine fanboy since the beginning, being the naive doctor who had faith in science (which is really political science) and government.  Now he brings this out.  Perhaps it is because the forced vaccine program was exposed in the United Kingdom and now it’s a move to save his own reputation without needing to worry about being censored by YouTube or being attacked by the UK government for spreading medical information.  Too little, too late Dr. Campbell.  You could have said this 2 years ago.

Treatment with Ivermectin Is Associated with Decreased Mortality in COVID-19 Patients: Analysis of a National Federated Database https://bnf.nice.org.uk/medicinal-for… https://list.essentialmeds.org https://www.sciencedirect.com/science… https://www.sciencedirect.com/science… https://www.sciencedirect.com/journal… Purpose To evaluate the difference in mortality, Patients treated with ivermectin Patients treated with remdesivir 44 healthcare organizations and 68 million patients from US, January 1, 2020 and July 11, 2021 Methods & Materials Retrospectively identified diagnosed adults Recorded use of ivermectin, but not remdesivir Recorded use of remdesivir, but not ivermectin Controlled for, comorbidities, and treatments that may affect COVID-19 survival outcomes: age, gender, race, ethnicity, nicotine use diabetes mellitus, obesity, chronic lower respiratory disease, ischemic heart diseases, tocilizumab, glucocorticoids, or ventilator use. Primary outcome assessed, mortality Sith significance assessed at p less than 0.05. Result 41,608 patients who had COVID-19 Treated with ivermectin n = 1,072 Treated with remdesivir n = 40,536 Ivermectin was associated with reduced mortality vs remdesivir OR 0.308 p less than 0.0001. Conclusion Ivermectin use was associated with decreased mortality in patients with COVID-19 compared to remdesivir. In the future, if more publications are published with the similar result to the current analyses, the certainty of evidence will increase. Ivermectin Prophylaxis Used for COVID-19: A Citywide, Prospective, Observational Study of 223,128 Subjects Using Propensity Score Matching (Brazil) https://www.cureus.com/articles/82162… Background Ivermectin has demonstrated different mechanisms of action, coronavirus infection and COVID-19-related comorbidities. Prophylaxis combined with the known safety profile of ivermectin Study to evaluate the impact of regular ivermectin use on subsequent COVID-19 infection and mortality rates. Prospective, July 2020 and December 2020 Inviting the entire population of Itajaí to a medical visit to enroll in the program, ivermectin was offered as an optional treatment to be taken for two consecutive days every 15 days at a dose of 0.2 mg/kg/day. Study analysis consisted of comparing ivermectin users with non-users using cohorts Results 223,128 citizens of Itajaí considered 159,561 included in the analysis 113,845 (71.3%) regular ivermectin users 45,716 (23.3%) non-users Of these 4,311 ivermectin users were infected, (3.7% infection rate) 3,034 non-users (6.6% infection rate) A 44% reduction in COVID-19 infection rate Risk ratio (RR), 0.56 The regular use of ivermectin led to a 68% reduction in COVID-19 mortality Deaths 25 (0.8%) deaths in the ivermectin group 79 (2.6%) among ivermectin non-users RR, 0.32 p less than 0.0001 When adjusted for residual variables, reduction in mortality rate was 70% There was a 56% reduction in hospitalization rate 44 in the ivermectin group 99 in non ivermectin users After adjustment for residual variables, reduction in hospitalization rate was 67% p less than 0.0001 Conclusion In this large study, regular use of ivermectin as a prophylactic agent was associated with significantly reduced COVID-19 infection, hospitalization, and mortality rates.